Banks are at a make-or-break moment according to Deloitte Center for Financial Services as digital assets will revolutionize how money is created, transferred, stored, and owned.

Deloitte said in its 2022 banking and capital markets outlook that more than one tenth of Americans either bought or traded cryptocurrencies between June 2020 and June 2021.

What’s a top priority in the coming year for 65% of banking leaders? Upskilling their organization’s talent. Explore new talent models and #BankingIndustryTrends in our 2022 outlook. https://t.co/y2Nxgn0JgG

“In the not-too-distant future, digital wallets could become the preferred vehicle to exchange money and store assets,” added the report.

Brian Armstrong, co-founder and chief executive of Coinbase, said this week that people think of the firm as a centralised exchange but it is aiming to become the primary financial account of crypto economy where customers can store assets, trade, lend and transact other services. 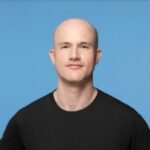 “Coinbase is going to embrace DeFi as we we think that’s a very important trend,” said Armstrong. “You’re going to see DeFi products and services surfaced within Coinbase app, either as third -party apps or more first-party apps and interfaces.”

DeFi, or decentralised finance, lets customers recreate some traditional financial services in a decentralised way on a blockchain using smart contracts – such as lending their assets.

Deloitte said the growth of the cryptocurrency market to more than $2 trillion in total has compelled banks to explore extending their underlying infrastructure to introduce new services for trading and custody, although engagement has been sporadic. The report gave the example of Bank of New York Mellon planning to administer and custody digital assets alongside traditional holdings.

Other applications of digital asset technology, such as tokenised assets, could also have far-reaching implications for financial services. Tokenization may create entirely new markets by establishing liquidity for illiquid assets, such as art or real estate, and expanding the ease with which they can be transacted and owned.

Deloitte highlighted that there are significant hurdles to mainstream adoption of crypto assets including trade-offs between public and private blockchain networks, inadequate custody infrastructure, the perceived association with nefarious activities, high volatility and the lack of a global regulatory framework.

Deloitte said: Nevertheless, banks should accelerate their engagement with the digital asset space, even though regulatory clarity is lacking at this time. For example, they could either build or plug into the developing ecosystems.

The pandemic accelerated IT modernization for many banks but Deloitte said these efforts are often incremental, localized, and fragmented 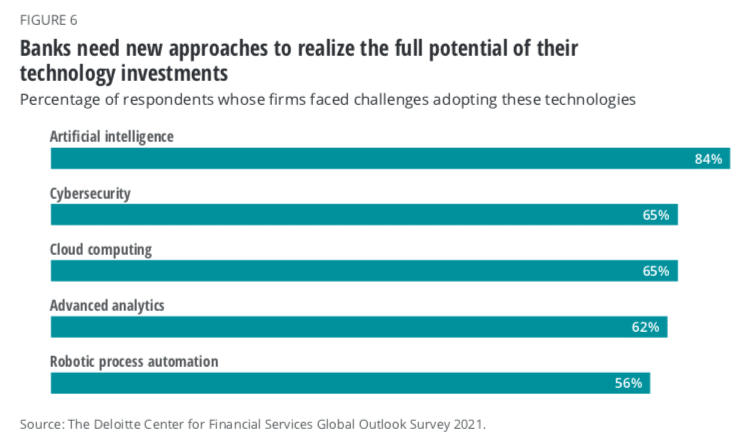 Deloitte said banks should place cloud at the heart of their business and deploy artificial intelligence at scale.“84% of our survey respondents say their organizations faced challenges adopting AI, more than with other technologies,” added the report.

AI models require a robust data infrastructure and most banks are lagging in this area. In addition, Deloitte advised that banks should use the next two years to determine where quantum computing may have the most disruptive influence and strategize accordingly. The report highlighted Barclays, Citi, and Wells Fargo setting up R&D teams and alliances with quantum providers.

Deloitte continued that climate change will profoundly impact banks’ business and a new ecosystem is emerging including “carbontechs.”

“This is an area where banks could take a leading role in orchestrating partnerships through incubating, early-stage funding, capital raising, and trading of carbon credits,” added the survey.

In the next year, large banks should also establish tangible criteria to achieve their emission– reduction goals; solidify their stress testing and credit risk modelling procedures; amplify efforts to help clients manage physical and transition risks; and enhance their disclosures on climate-related risks and opportunities.

Another priority should be embedding climate risk into the bank’s operations and creating new performance metrics to measure progress.

“Most banks have vowed to direct capital flows to green projects and reduce their portfolio exposure to carbon emission, added Deloitte. “But while many are facing mounting legal, regulatory, and ethical pressure to wind down fossil fuel financing on a quicker timeline than their current trajectories, climate-friendly banking can also unlock new sources of value and opportunities for revenue growth.”