Blackrock had long-term net flows of $202bn (€175bn) into its exchange-traded funds in the first nine months of this year, overtaking the total flows during the whole of 2020.

Larry Fink, chairman and chief executive of BlackRock, said on the third quarter results call that more clients are using ETFs as a building block in their portfolios as the firm crossed the $200bn barrier for inflows in the year-to-date.

“We generated $58bn of ETF inflows in the third quarter with growth across each of our core strategic and precision product categories, including strong flows in fixed income as clients sought inflation protection and sources of income,” he added. 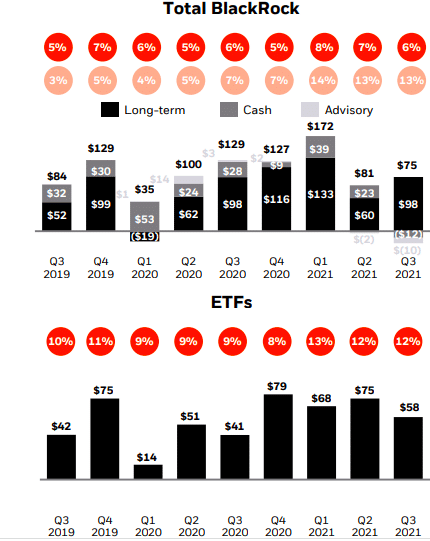 Fink continued that the entire ETF industry has momentum as more investors discover the convenience, efficiency and transparency of ETF vehicles.

“We see opportunities well beyond the 30 million people who use our ETFs today and continue to believe in the long-term growth potential for ETFs.,” said Fink.

Globally ETFs had record inflows of $924.2bn in the first nine months of this year according to ETFGI, an independent research and consultancy firm covering trends in the global ETFs and ETPs ecosystem. The inflows are more than the full year 2020 net inflows of $762.8bn, which was an all-time high.

iShares, BlackRock’s ETF business, was the largest in terms of assets with $3 trillion, reflecting 31.6% market share, at the end of September according to ETFGI. Vanguard was second with $2 trillion and 21.5% market share, followed by State Street’s SPDR ETFs with $1 trillion and 11.3% market share. The top three ETF/ETP providers, out of 580, account for 64.3% of global ETF/ETP assets, while the remaining 577 providers each have less than 5% market share.

BlackRock’s active platform also continues to outpace the industry according to Fink, generating $45bn in net inflows in the third quarter and nearly $200bn over the last 12 months.

Fink continued that momentum continued in sustainable investing with  $31bn in net inflows across all regions in the third quarter, contributing to the $80bn of inflows in the first nine months of this year.

“The demand is growing precipitously in terms of clients and so the capital is there,” he added. “What is not as prevalent are the projects or the opportunities.”

Active sustainable net inflows of $7bn were led by the launch of BlackRock’s ESG Capital Allocation Trust in August, a closed-end fund strategy focused on equity and debt securities.

In Europe Fink said BlackRock captures nearly 50% of the industry flows into environmental, social and governance ETFs. “Almost half of all industry flows and are going into sustainable ETFs, up from less than 10% just three years ago,” said Fink.

He continued that clients also want impact-oriented strategies that seek to deliberate targeted environmental or social outcomes. Fink highlighted that in September BlackRock partnered with the Thurgood Marshall College Fund to support students of Historically Black Colleges and Universities and Predominantly Black Institutions. TMCF will receive an annual contribution from BlackRock of 5% of net revenue from the management fee for the BlackRock Liquid Federal Trust Fund.

The government money market fund is designed for investors seeking to further positive social outcomes through their cash management. Firms who have committed as investors or distributors of BLFT, including Bank of America, BNY Mellon, Capital One, The Coca-Cola Company, Google, Jefferies, Lyft, and Verizon.

Despite the growth of ESG, Fink believes progress is not being made fast enough, especially as the regulatory focus has been on  public company disclosures.

His greatest fear is that we are creating a bifurcated world where the  pressure on public companies, banks and asset managers is enormous. There is no pressure on private companies so if hydrocarbon companies divest operations to private equity then that does not help change to a net zero world.

“Fundraising momentum remains strong,” he added. “We have approximately $29bn in committed capital to deploy for institutional clients in a variety of alternative strategies, representing a significant source of future base and performance fees.” 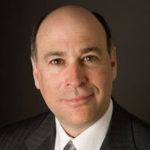 Rob Kapito, president of BlackRock, said on the call that retail investors have grow their allocation from 2% of their portfolios to up to 20%.

“Year-to-date we have raised over $24bn of net inflows at approximately 85 basis point average fee rates across retail liquid alternatives, credit vehicles and our public and private closed end fund offerings,” he added.

Blackrock recently launched web-based alternatives portfolio analytics for financial advisors. The firm has raised $100bn of gross capital over the last five years in the alternatives platform and expect to raise $100bn more in the next three years.