The past half-decade hasn’t been kind to U.S. equity broker-dealers, as trading volumes and market volatility have trended lower while costs and competition have increased. The squeeze has forced broker-dealers to raise their game, as end-user investment managers continue to enjoy a buyers’ market for trade execution.

“There is an increased focus on quality,” said Jay Biancamano, head of equities product marketing at trading-technology provider Fidessa. “There are a number of execution venues and hundreds of different ways to execute a trade — everyone is trying to throw their services at you. Firms understand that less flow means they have to differentiate themselves and offer quality execution and service.”

U.S. equity volume totaled more than 12 billion shares per day at times during the global financial crisis of 2008-2009. Few if any market participants expected that level to sustain itself, but neither was it expected that volumes would slide to current levels of about 6 billion per day, and be accompanied by persistently low volatility. That ‘new normal’ has kept trade handlers and order routers lean and focused on what they can do to win and retain business in a difficult environment.

“Everybody on the broker side has worked very hard to find greater efficiencies and focus on their largest customers,” said Kevin McPartland, head of market structure and technology research at consultancy Greenwich Associates. “They’ve needed to figure out how to do more with less, which at least presumably will increase profit margins over time.” 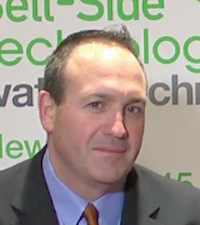 While equities order flow isn’t buoyant, it is generally stable, and there is evidence that the bottom for broker-dealers has passed. For the first quarter of 2015, sector stalwarts Goldman Sachs and Morgan Stanley posted improved equities results, while Bank of America Merrill Lynch and Citigroup reported numbers about in line with the year-earlier quarter.

Morgan Stanley generated $2.3 billion in net revenue from equity sales and trading in the first quarter, up from $1.7 billion a year earlier. On the company’s earnings conference call, one analyst asked about the business in the context of what he described as “continuous” traction over the past four to six quarters.

“We’re benefiting from a lot of investments in the business over many years,” replied Ruth Porat, Morgan Stanley’s chief financial officer. Technology investments “enable us to execute on behalf of clients in all market environments and do so on a cost-efficient basis…It is a very tightly run business, but it’s delivering results.”

“Things are improving,” said Biancamano. “We have a good IPO calendar and we have investments coming back in…I think there is a lot of alpha still to play in the market.”

Technology providers play a vital role for broker-dealers, who need their trading infrastructure be first and foremost, ultra-reliable. “You can’t be down a day or get stuck with technology bills,” Biancamano said. “You want to be able to rely on a system for information, insight, and service.”

Third-party systems and software providers are especially mission-critical for smaller brokers, who don’t have the wherewithal to build in-house the way a bulge-bracket firm might. Tech firms “are probably my most important stakeholder behind my clearing firms,” said Joshua Greenstein, president and chief compliance officer at New York-based market maker Puma Capital, which launched in 2008.

Aside from keeping broker-dealers’ systems up and running and compliant with regulations, tech providers are also leaned on for the range of products and services that enable best execution and contain costs. These include connectivity, venue and transaction cost analysis, market data, business intelligence, and commission management and the unbundling of trading from research.