Crypto Custody is Nigh

When the CME Group and Cboe Global Markets launched trading in cash-settled bitcoin futures, it provided institutional investors exposure to the cryptocurrency market through derivatives.

However, regulation-friendly access to the spot market might be only a couple of quarters away, said Mike Novogratz, the CEO of Galaxy Digital and a former CIO at Fortress Investment Group, during a fireside chat at the Rosenblatt’s Financial Technologies Summit in Midtown Manhattan. 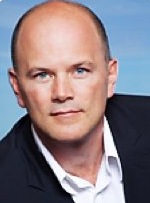 “I think in the next three to six months that you are going to see major announcements by major players regarding custody business,” he said. “The moment that that announcement happens, prices will start moving once there are actual custody solutions on trusted names.”

If custody is the last piece in the adoption puzzle for institutional investment in cryptocurrency, the penultimate piece was a cryptocurrency index for benchmarking performance, he noted.

Bloomberg and Galaxy Digital launched jointly launched their market cap-weighted Bloomberg Galaxy Crypto Index, which tracks the performance of the largest, most liquid portion of the cryptocurrency market, in early May.

“I think our index was an architecturally necessary,” said Novogratz.

Novogratz found it ironic that while cryptocurrency’s decentralized revolution wants to disintermediate banks, but investors want to make sure their private keys remain secure with third parties.

“For every two steps forward, it is one step back,” he chuckled.

For Novogratz, it is not a matter of developing the technology appropriate custody technology because it is already available,

“I sleep like a baby with my money at Cambridge Trust,” he told the audience.

However, if you are the State of Wisconsin and a fiduciary for a lot of people’s money, a startup may not sounds as good as a brand-name custodian.

In the meantime, Novogratz has seen the sleeping giant of institutional investment wake and start shuffling towards the cryptocurrency market.

During a meeting with Intercontinental Exchange CEO Jeff Sprecher, he found that Sprecher knew more about cryptocurrency’s plumbing than he did.

“It was humbling,” said Novogratz.

Wall Street should remain patient since the enabling technology has a way to go before it reaches its adolescence.

The Ethereum project is three years old is about two to five years away from it becoming industrial strength, he said. “We’re a second grader; we’re un- even in high school yet.”