Barbara Novick, vice chairman and co-founder of BlackRock, said the fixed income market structure need to be reviewed after the volatility resulting from the Covid-19 pandemic highlighted stresses.

Novick said the extreme volatility in March due to the Covid-19 pandemic had highlighted stresses in the fixed income ecosystem.

She added: “The fixed income market structure today is not fit for  purpose if banks are not acting as intermediaries.”

As an example, she highlighted that investors in the commercial paper market can only sell securities back to the bank they had purchased them from. There were also stresses in the US treasury market as liquidity worsened before intervention by the Federal Reserve.

“We need to look at the ecosystem,” Novick added. “A lot of little tweaks are always better than one Big Bang.”

However she praised the exchanged-trade fund market, which carried on trading efficiently despite stresses in the underlying bond markets.

“ETFs were heroes, not villains, in March,” Novick said.

The Financial Stability Board this week published a report of the impact on Covid-19 on financial markets to be delivered to G20 Leaders ahead of their summit.

Randal Quarles, chair of the FSB, said in a letter that the regulator will continue to act to address vulnerabilities in the financial system exposed by COVID-19 and new and emerging risks.

“Addressing the vulnerabilities exposed by the Covid event and making progress on other important topics ranging from cross-border payments to Libor will require continued strong commitment and coordination at the international level,” Quarles added.

The FSB’s review found that the March turmoil underscores the need to strengthen the resilience of non-bank financial intermediation.

“Absent central bank intervention, it is highly likely that the stress in the financial system would have worsened,” said the report. “The financial system remains vulnerable to another liquidity strain, as the underlying structures and mechanisms that gave rise to the turmoil are still in place.” 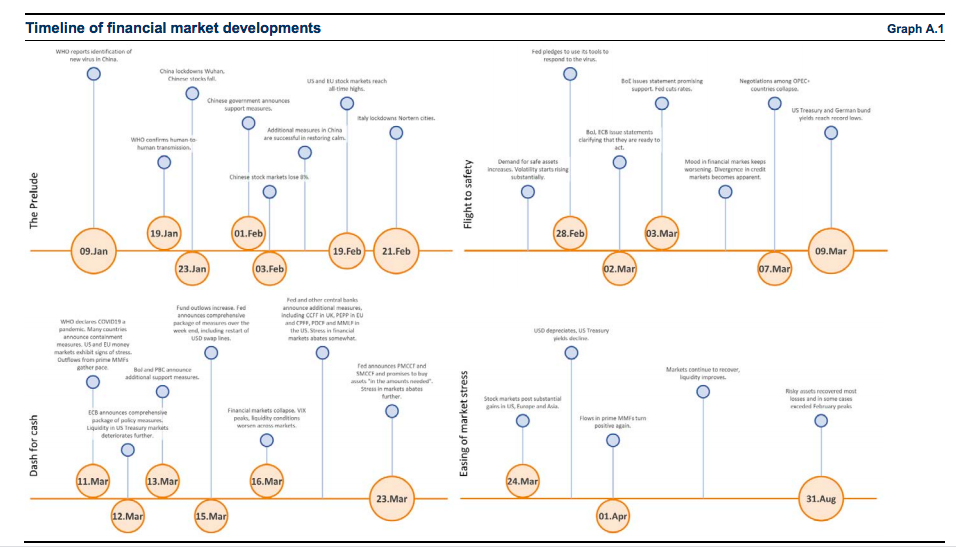 The FSB said that while dealers initially absorbed bond sales in an orderly manner, intense selling pressure temporarily overwhelmed their willingness or capacity to intermediate in core funding markets, including less liquid segments of the corporate debt markets.

“This may have contributed to illiquidity and severe price moves, raising questions about the financial system’s ability to handle liquidity imbalances during stress, as markets continue to grow,” added the report.

Market dysfunction was exacerbated by the substantial sales of US Treasuries by some leveraged non-bank investors and foreign holders. 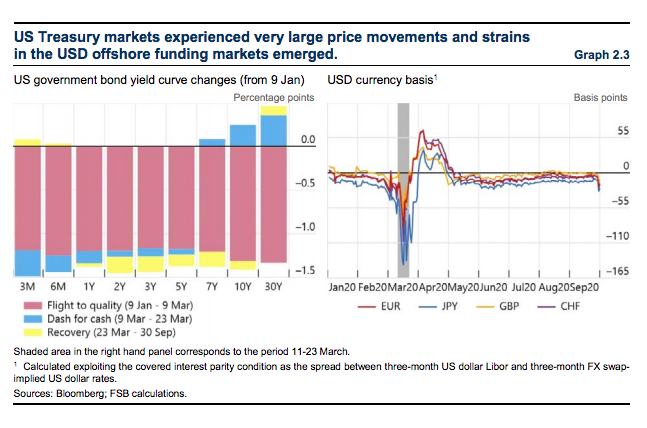 The study noted that central counterparties remained resilient despite market turbulence, though margin calls may have been larger than expected in some cases.

“The challenge faced by some market participants to cope with liquidity demands arising from variation and initial margin calls raises questions about whether they were fully expecting those calls and whether they were adequately prepared for funding them,” said the report. “As a result, their actions to raise liquidity may have adversely affected other parts of the financial system.”

The FSB continued that significant outflows from non-government money market funds reflected liquidity mismatches and perceptions by end-investors as cash-equivalent or redeemable on demand.

“Redemption dynamics may have been exacerbated by certain fund structures and regulations that may have created perceptions of first-mover advantage,” said the FSB. “Similar dynamics, albeit less intense and widespread, may have been present in other types of open-ended funds.”

In particular, funds invested in less liquid assets, such as property and high-yield corporate bonds may have faced redemption pressures because of their liquidity mismatch as well as because of the uncertainty associated with the value of their investments.