At the request of the UK Chancellor, the Governor of the Bank of England has agreed to extend his term to January 2020.  The exchange of letters is published today.

In his letter, the Chancellor said:

“Further to our discussions and those that I have had with the Prime Minister, I am writing to ask whether you would be able to extend your term as Governor of the Bank of England to January 2020 to support a smooth exit of the United Kingdom from the European Union and an effective transition to the next Governor.” 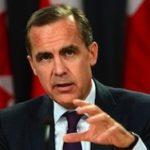 In his reply, the Governor said:

“I recognise that during this critical period, it is important that everyone does everything they can to support a smooth and successful Brexit. Accordingly, I am willing to do whatever I can in order to promote both a successful Brexit and an effective transition at the Bank of England and I can confirm that I would be honoured to extend my term to January 2020.”

HM Treasury has also announced that Jon Cunliffe has been reappointed as Deputy Governor for Financial Stability for a second five-year term.

Jon Cunliffe said: “I look forward to continuing to work with Mark and all Bank colleagues to deliver our important mission over the coming years.”

Bradley Fried, Chair of the Bank’s Court of Directors, said “The Bank and its Court of Directors are delighted that Mark and Jon have agreed to stay on.  Continuity in the outstanding leadership they provide will help the Bank succeed in our crucial work”.

SDA: It's a welcome development that #carney will stay at the helm of #BoE until the end of January 2020 This should provide continuity in the approach to monetary policy during the #Brexit transition supporting business & consumer sentiment at a delicate juncture for the country pic.twitter.com/el3prFyowk