On the heels of the 2019 EMEA Trading Conference in London, the largest single-day event focusing on electronic trading, it seems fitting to review what happened in the first full year of MiFID2 compared with expectations three years prior. When 900 electronic trading experts of FIX Trading Community gathered from 22 countries at the 2016 EMEA Trading Conference in London, they were asked their opinion about the European trading landscape in 2018 post MiFID2.

More than half the audience, 51%, said they expected in 2018 “More electronic Block Trading”. With the next question, it was our privilege to see distinguished practitioners clearly express their independent opinion that Turquoise was their preferred venue for order book innovation.

Rosenblatt Securities observed during 2018 that MiFID2 eliminated broker crossing networks and, combined with the impact of MiFID2 double volume caps, contributed to a steep drop in the annual share of trading by dark pools. The changes favoured venues that focus on block trades which are exempt from the caps. The share of trading of European electronic block trading services evaluated by Rosenblatt Securities including Turquoise grew to just under 30% of European dark pool value traded.

The following Turquoise chart shows that Turquoise Plato™ continues to set year on year records for value traded. All of these trades as matched at midpoint of the primary best bid and offer for potential price improvement. The interesting trend is the remarkable growth of Turquoise Plato Block Discovery™ from less than 5% to more than 45% of all the Turquoise Plato™ midpoint value traded by calendar 2018, reflecting the significant change in investor behaviour by sending much larger orders to the market.

Fast forward to February 2019, and customers using Turquoise Plato Block Discovery™ have traded more than €172 billion – more than any other provider as a fully automated service without the fading associated with manual firm up models. The insight is that electronic block trading at midpoint works and Turquoise is fully adopted by the global investor community, ready to scale beyond UK and European markets.

Turquoise customers on 31 January 2019 set a new daily record of €653m value traded via Turquoise Plato Block Discovery™, contributing to a new weekly record of €2,581m from 28 January to 1 February 2019.

The puzzle facing exchanges worldwide is that electronic order books shrink trade size. A large order matching against small orders leads to small trades – and published data shows that European exchange order books have shrunk and converged to an average of around €10,000 per trade. Why does this matter? Because institutional investors, such as asset managers, pension funds and insurance companies, handling large trades – ultimately on behalf of end investors – will suffer stronger negative market impact and signalling risk in such an environment. 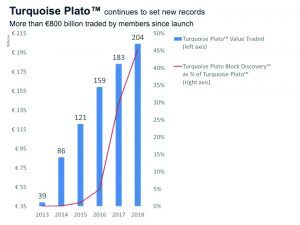 By 2016, investors could find a single electronic block execution per stock per day on the scale of single-digit millions of Euros per trade.

Today in 2019, investors using Turquoise Plato Block Discovery™ are more likely to match multiple big trades per stock in one day, now this service has grown with a significant user base and become the leading electronic block and quality midpoint trading venue in Europe.

Turquoise was honoured to win The TRADE’s Leaders in Trading 2017 Award for Block Trading and subsequently to feature in The Parliamentary Review 2018 as Finance sector example “Highlighting best practice.”This included the 2018 bubble chart example of Spanish stock Santander with large single trade of €15.6m plus more similarly sized trades in the same stock on the same day.

Turquoise allows, via a single connection, members to trade securities of 19 European countries – developed and emerging – and settle each trade in the respective country’s central securities depository. Turquoise has great experience connecting to multiple clearinghouses, including the fully interoperating LCH, EuroCCP, and SIX x-clear, providing a choice of CCP to members and ultimately settling trades into one of 20 settlement destinations, including Euroclear Bank for International Order Book Depository Receipts denominated in other currencies, for example, USD. Our humble view is that by optimising the post-trade model, straight through processing enhances trading liquidity.

Turquoise functionalities are designed in response to customer demand – Turquoise effectively operates three parallel order books: one lit, one midpoint that also provides quality execution for electronic blocks, and one for periodic lit auctions that welcomes orders of all size. Since launch in 2008, Turquoise customers have matched more than €7 trillion. Turquoise members are increasingly trading exchange traded funds and global depository receipts, financial instruments representing shares in foreign companies from countries such as Egypt, India, Russia and South Korea. Investors are finding liquidity via Turquoise innovations designed in partnership with our stakeholders. 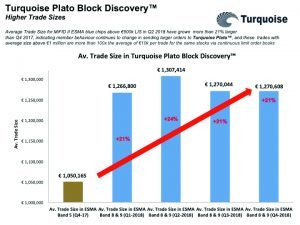 Coincidently by January 2019, more than 2,900 stocks traded on Turquoise compared with around 1,600 in early 2013. This increasing number of active stocks demonstrates that investors are seeking growth in investment returns, not only through blue chips but also mid and small caps – and they are finding liquidity in these mid and small caps via Turquoise trading mechanisms. 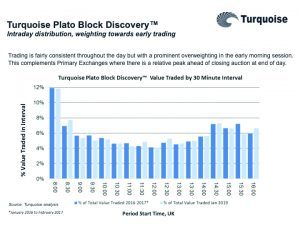 In October 2017, Turquoise embarked on a strategic initiative to enhance the trading of dynamic mid-tier company stocks quoted on LSEG’s international growth market, AIM. We made the constituents of the FTSE AIM UK 50 index, the fifty largest UK stocks on AIM, including ASOS and Fever-Tree, available to trade on Turquoise.

Investors in AIM 50 securities now have access to the same suite of Turquoise execution channels that are available via Turquoise for the biggest UK listed blue chips and mid-caps in the FTSE 100 and FTSE 250. Investors in these AIM stocks have added $billions of trades via Turquoise, with the majority of this additional value matched at midpoint via Turquoise Plato™. 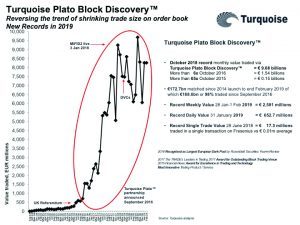 Investors routinely use Turquoise Plato™ midpoint and Turquoise Plato Block Discovery™ execution channels to save half of approximately 5 basis points bid-offer spread associated with FTSE 100 blue chips.These investors can now use the same algorithmic workflow to achieve savings of 10 times this amount by matching at midpoint of much wider bid-offer spreads associated with the smaller and historically less liquid FTSE AIM UK 50 securities.

Analysis led to further positive insight. Since the addition of Turquoise midpoint and electronic block trading channels for FTSE AIM UK 50 constituents, the primary stock exchange listing AIM securities, London Stock Exchange, recorded increased activity on its order book intraday and during its closing auction. The insight is that via the model of adding Turquoise midpoint order book to that of the primary market resulted in greater values traded in aggregate of all execution channels. 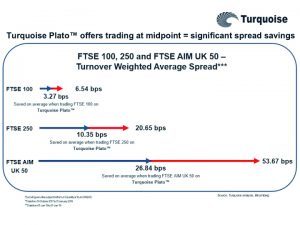 Turquoise has a proud track record of innovation and partnership supporting efficient capital markets. As Turquoise celebrates 10 years of trading, thank you to our customers, we look forward to what the next 10 years will bring as financial markets, investors needs and market structures continue to evolve.