Reap the Benefits of This ‘New Ingredient Latte’

What is considered the next big thing in the beverage industry has been a daily companion to those of Indian heritage for centuries. Haldi doodh, now known as Turmeric Latte or Golden Milk, has quite rapidly developed a global cult following. Cafes from Sydney to San Francisco have jumped on the haldi bandwagon and are offering up this new concoction blended with almond (or coconut) milk.

I have been drinking/eating haldi practically since birth, in one form or another. There are multiple health benefits to this radiant mustard-colored powder, which once ingested will allow you to literally shine on the outside. During Indian wedding festivities, it is customary to spread a haldi paste on the bride and groom to ward off evil spirits.

According to Wiki, Plants are gathered annually for their rhizomes and propagated from some of those rhizomes in the following season. When not used fresh, the rhizomes are boiled for about 30 to45 minutes and then dried in hot ovens, after which they are ground into a deep-orange-yellow powder commonly used as a spice in Bangladeshi cuisine, Indian cuisine, Pakistani cuisine and curries, for dyeing, and to impart color to mustard condiments. One active ingredient is curcumin, which has a distinctly earthy, slightly bitter, slightly hot peppery flavor and a mustardy smell. 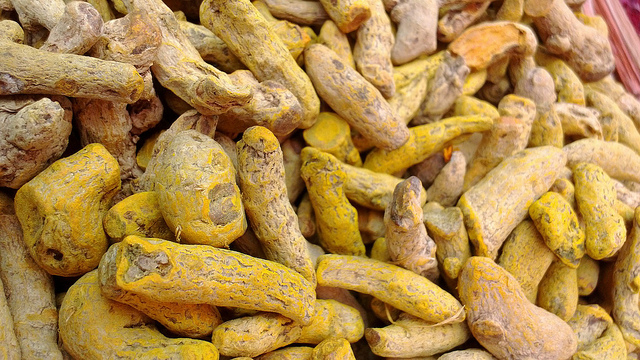 What are the benefits of haldi/turmeric?

When considering a holistic ayurvedic approach to everyday healthy living, one turns to turmeric for the properties listed above, to name a few. In addition, this spectacular ingredient is used within a multitude of Indian/Pakistani curries and rice dishes.

One can infuse haldi however one chooses. Whether you are beautifying, detoxifying or warding off ailments, buy your Turmeric today. This is one ingredient, which shall never be missing from my pantry.

Coconut Oil, Ghee, Ginger (added to teas), and now Turmeric. Adopting the cultural qualities of the East continuing to trend for health reasons will consistently rise. What will we see next?