Exchanges and broker-dealers on both sides of the Atlantic are squaring off over whether current and proposed regulations favor one over the other.

In the United States, Sifma—the trade organization for the securities industry—sent a letter on Thursday to the Securities and Exchange Commission to request a review of the regulatory structure of broker-dealers, exchanges, and the self-regulatory model.

In today’s markets, securities exchanges and broker-dealer trading venues perform essentially identical functions. Nonetheless, the status of exchanges as self-regulatory organizations (SROs) has not changed, even as the exchanges have evolved from member-owned utilities to for-profit businesses, as well as active competitors with their broker-dealer members.

“Sifma supports a holistic review of U.S. equity market structure to ensure safe, sound and efficient markets that investors can have confidence in,” said Randy Snook, executive vice president at Sifma. “A part of that review should focus on SRO structure, because the markets have changed to the point that the current structure of the self-regulatory model is widely viewed to be outdated and in need of reform.” 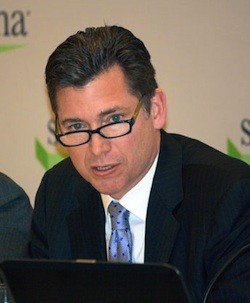 In Europe, the review of the Markets in Financial Instruments Directive/Regulation (MiFID/MiFIR) creates a new category of trading venue called Organized Trading Facility (OTF), which would include broker-crossing networks and single-dealer trading platforms.

Unlike other trading venues, operators of OTFs would have greater discretion over how transactions are executed, but they would not be permitted to trade against their own proprietary capital. The Federation of European Securities Exchanges (FESE) believes that the OTF category should be abolished.

The European Council, the Parliament and the European Commission are currently involved in a trialogue process to resolve the many difference that separate their respective drafts.

“It will be many months before a final text emerges, and there is still considerable uncertainty about what it will look like,” said Christopher Bernard, legal analyst at Bloomberg Law, in a report.

In Parliament’s version of MiFID II, OTFs would be reserved for bonds, derivatives and other non-equity financial instruments, and broker-crossing networks for equities would be classified as either regulated markets or systematic internalizers. The Council and the Commission, on the other hand, would permit OTFs to be used for all instruments, including equities.

There continues to be inherent conflicts of interests between the SROs’ regulatory functions and its members, market operations, issuers, and shareholders, SEC commissioner Luis Aguilar said in a speech in July.

“To stay in business, SROs have to attract order flows, and this may lead to SROs being less inclined to enforce rules vigorously against financially supportive members, issuers, and shareholders,” Aguilar said. “In the past, there have been instances where SROs have favored one member or customer over another; for example, by sharing market data with paying subscribers before releasing such data to the public.”

The advent of these new competitive challenges and continued conflicts of interests require, among other things, a closer working relationship between SROs and the SEC, and for the Commission to re-evaluate how it can best provide appropriate oversight over SROs, Aguilar said.