To the Big Stage

A young person from a faraway small town is drawn by the bright lights of the big city and comes to the Big Apple to pursue a dream. It’s the stuff of countless movies, books and blogs, but also real life.

Rio Rancho, New Mexico has a population of 87,000, so it’s not exactly a small town, but Louis Roccato is otherwise following the well-worn script of many who came before him, some of whom succeeded and many others who failed.

At the age of 23, when many young adults (including myself), are going through the awkward and overwhelming period between college and a I-can-make-money-and-be-happy career, Roccato is staying focused.

Born and raised in Rio Rancho, Roccato started dancing 12 years ago and soon realized that dance was his calling. “I really just wanted to do anything with dance, as long as I was dancing and being able to live off something that I loved,” Roccato says. Dancing in high school and moving on up to the New Mexico Ballet Company, Roccato’s forte of ballet and contemporary has earned him recognition as a male dancer who moves with poise and grace while not sacrificing his resilience and vigor. 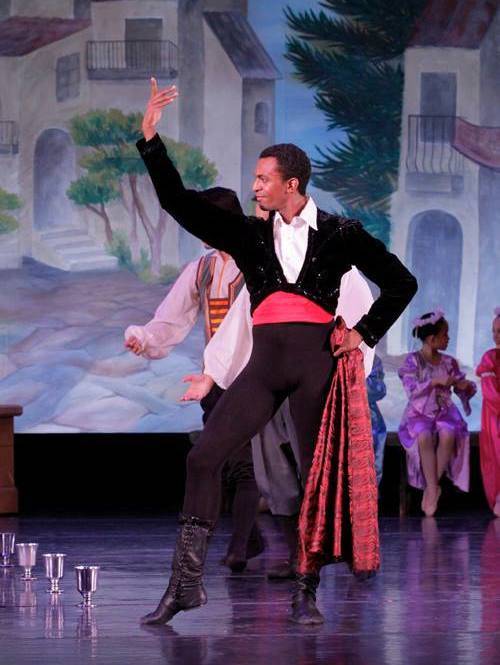 Starring in such roles as the Rat King, Nutcracker and Snow King in The Nutcracker, Roccato takes the opportunities life throws at him and was willing to jetè from a small desert town to the big leagues in the New York where many people only dream of. And according to Roccato, it apparently isn’t all too hard; the key is just to travel, meet people and network.

“I think that if people who are not from the big cities stay in their smaller town, it will be so much harder for them to be recognized,” Roccato says. “It is all about connecting by traveling and putting your face out there for dancers, choreographers and the public to see. This way, they will more likely be noticed.”

Costs of dance shoes, costumes, and classes added up, and Roccato had to work at the studio cleaning or helping out at reception. With the help from his studio job and generous sponsors, he was able to break in as an apprentice with New York-based Rioult Dance.

With the hopes of becoming a full company member in a year or two and eventually a member with Alvin Ailey American Dance Theater, Roccato is looking forward to the European tour in Italy and France with Rioult, and performing at Joyce Theatre in New York.

And in the meantime, his responsibility as an apprentice is knowing all the choreography in case of an injury where he would have to fill in. “It’s a lot of work,” Roccato says.

But he knew it wouldn’t be easy.