Stifel Financial Corp. announced the appointment of John Spensieri as Head of U.S. Equity Trading, effective immediately. In this role, he is responsible for the daily operation and management of Stifel’s equity trading desk. He is based in the firm’s Baltimore office. Spensieri joined Stifel in 2009 as Head of Alternative Executions, where he drove strategy and implementation for program and algorithmic trading, options, and trading technologies. He is John is also heavily involved in the broader trading community serving as a member of the National Organization of Investment Professionals (NOIP), serves on the Operating Committee for the National Securities Traders Association (STA), and is an active member of the Regional Broker Roundtable, a group of senior traders from every major regional broker that meets annually to discuss current events affecting the industry. Most recently, he served a four-year term as the President of the Mid-Atlantic Security Traders Association. Prior to joining Stifel, Spensieri ran a consultancy company focused specifically on trading strategy for the sell-side and had nearly 50 broker dealers as clients. 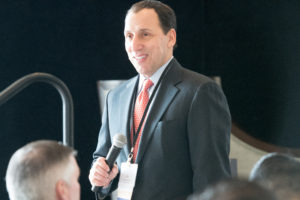 Glenmede Investment Management LP (“GIM”), a privately owned, independent asset management firm, announced the appointment of Stacey Gilbert as a Portfolio Manager on its derivatives team. In this role, Gilbert joins Sean Heron, CFA, Options and Derivatives Portfolio Manager, as a co-manager of the firm’s Secured Options and Global Secured Options strategies. Gilbert will be based in Philadelphia and report to Heron. She joins GIM from Susquehanna Financial Group, where she most recently served as Head of Derivative Strategy. In this role, she led a team responsible for providing market commentary, actionable ideas and trading strategies. In her more than two decades at Susquehanna, she held several leadership positions, including key senior trading roles on the trading desk and the American Stock Exchange, trading both options and ETFs. Gilbert also led the company’s Education department. She earned a Bachelor of Arts in mathematics, with a minor in economics, from Dartmouth College.

The FIA has appointed a Deutsche Bank veteran as its new head of Europe, following the departure of Simon Puleston Jones earlier this year. Bruce Savage will take on the role at FIA this summer after being an active member of FIA, recently serving on the industry body’s board of directors and as a member of the European Regional Advisory Board. He joins from Deutsche Bank where he has spent that last 21 years in various senior roles, most recently as global head of regulatory affairs and market structure, listed derivatives, and markets clearing.

Refinitiv announced the appointment of Joseph Mrak as global head of wealth management. In this role Mrak will lead the global wealth management business with a focus on doubling down on driving technology innovation. Most recently, he was the Chairman and CEO at FolioDynamix. He then became a Group President at Envestnet post acquisition in 2018. FolioDynamix/Envestnet provides intelligent digital systems for wealth management and financial wellness in the United States and internationally.

IQ-EQ, a leading investor services group, hired Steve Sokic, who joins the firm as Group Head of Private Wealth.  He will also sit on both the Group Management Board and Business Executive Committee. His appointment is effective immediately. Sokic joins IQ-EQ from a FTSE 250 alternative asset and corporate administration services provider, where he was Managing Director of its Corporate and Private Client segment and held broader executive stewardship role. Prior, he spent nearly 14 years in the Caribbean and Jersey with the wealth management arm of a leading multinational bank, where he rose through the ranks to take up the role of Global Head of UHNW Trust/Fiduciary and was a key member of its Global Trust Advisory Board, overseeing the bank’s global trust/fiduciary businesses.

Charles Stonehill and Clara-Christina Streit were appointed by shareholders’ meeting

Ann-Kristin Achleitner and Richard Berliand resigned from the board

Also, the Board elected Charles Stonehill and Clara-Christina Streit at the Annual General Meeting as new members of the Supervisory Board.

Jitendra Jaisinghani, a senior trader in JPMorgan’s prime services unit, has left to join Citigroup in the coming weeks, according to people with knowledge of his move. Jaisinghani will be joining the bank to run its Delta One flow business in North America, with oversight of ETF market-making, single stocks and custom baskets, according to the people. Delta one desks trade derivatives with a linear relationship to their underlying securities. That includes swaps, futures and forwards, among other instruments.

The LME elected Gay Huey Evans OBE as Chairman of the Board of Directors of the London Metal Exchange. Evans will replace Sir Brian Bender when he retires from the Board in early December 2019, as previously communicated. Gay’s international experience within the financial services industry includes significant commercial, risk, governance and regulatory knowledge and expertise.

PanXchange, an OTC physical commodity exchange and price discovery platform for products including industrial hemp and frac sand, has landed senior industry executive Andy Bose for its board of advisors. Bose will play a key role in driving important new strategic initiatives as the firm continues its rapid growth. He brings extensive experience using technology innovation to develop market transparency and most recently was a senior leader at S&P Global Platts.

SCORPEO, a company specializing in capturing missed corporate actions value reported that their US CEO and Co-Founder, Jonny Ruck and Co-Founder and COO, Sander Eijkenduijn, have been appointed as Ambassadors to the Transparency Task Force, acollaborative, campaigning community, dedicated to increasing transparency in financial services globally. The Transparency Task Force believe that higher levels of transparency are a prerequisite for fairer, safer, more stable and efficient markets that deliver better value for money and better outcomes to consumers. Through correlations between transparency, truthfulness and trustworthiness, their aim is to help repair the reputational damage the financial services sector has suffered for decades.