Utility or Futility? Timing is Everything

Imagine the setting: 140 years ago, down a dark Dickensian street in the City of London sits a lonely bank clerk at his desk, updating his ledgers by candlelight. This would by no means be the ideal setting for completing such an onerous task: with the lack of proper lighting, mistakes would have been inevitable, and money lost.

When, a few years later, the means to produce electricity through generators became available, the first bank to install electric lighting gained a distinct competitive advantage over its peers. But it didn’t last for long. Soon other banks began copying the first and the competitive advantage was gradually lost. Eventually the National Grid was created, and suddenly making one’s own electricity was old-fashioned (and expensive). It was much easier and more cost effective to outsource the task and buy it as a commodity from the central system.

The same logic applies to financial services: if you don’t choose the right moment to switch over to using shared industry utilities then you give yourself a competitive disadvantage and may lose out in the long-term. If you don’t notice that the market around you has changed, then success will be nigh-on impossible. 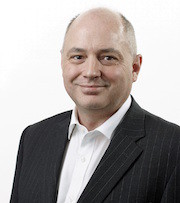 A key indicator in judging whether the time is right for utilities is to look at the language being used in the industry. Terms such as ‘best practice’, ‘standards’ and ‘reliability’ are all pointers towards mature segments of the market where standardisation has already been agreed. If financial organisations see these terms used in areas such as cash equities or bonds and debt processing, they can be confident some elements of the organisation’s business are ripe for utility provision.
While there has been talk of applying utilities in the area of OTC derivatives, if we look at the language being used to describe this market today it is not one of ‘standards’, but one of ‘reform’. People are talking about confusion and uncertainty in the market, and working groups are still being formed to decide on best practice, which can only be described as emergent at best. Executives need to be aware of the narrative surrounding the subject and realise that this specific sector is not yet ready to reap the benefits of a utility-based approach.

In general terms, the more mature the instrument, the more standardised the processing. While cash equities processing, for example, is largely standardised across the industry – it’s not the case for OTC derivatives. Even in one geographic market such as London, OTC processes are carried out differently from organisation to organisation; reconciliation and back office processes vary greatly, and that’s before you consider adding an international dimension.

Don’t get me wrong, utilities are a great thing. It’s good to aspire to implement them and it may well be what the derivatives industry needs long term. We just need to approach them with caution and look very closely at market maturity before jumping the gun. Although it may seem like a good idea to get on board before everyone else, it might pay off in the long term to wait this one out and see where discussions around standardisation take us first.