A Ride Down the Freeway

“There’s a greater demand for our product and a correlation with the electronic markets that are developing in options,” said Jerry David, chief business development officer at OptionsCity. “Futures are further along in the developmental cycle in terms of the transition from floor to electronic, while options are still in their infancy. We believe that as the volume of options that are traded electronically grows, our breadth of offerings will increase as will the number of customers looking for the services that we provide.” 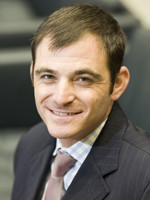 “As the volume of options that are traded electronically grows, our breadth of offerings will increase as will the number of customers looking for the services that we provide.

OptionsCity developed the Metro electronic trading and market-marking platform, which has powered derivative trading since its launch in early 2008.

Chris Sugden, managing partner of Edison Ventures, said in a statement: “OptionsCity is a proven innovator. We believe Freeway represents the next major development for options and futures trading. Traders demand a multi-asset capability where they can quickly test and deploy new strategies.”

“We selected Edison as a partner – after thorough due diligence – based on their impressive track record of growing businesses as well as their commitment and knowledge of the financial technology sector,” said OptionsCity CEO Hazem Dawani. “We’re excited to begin a new chapter in the growth of our firm.”

Metro is a server-based architecture that offers integrated risk management, execution, and market making, as well as exchange connectivity. It allows clients to enter orders manually or electronically, and it also provides streaming quotes.

A hallmark of Metro 4.1 is the SmartComplete feature that allows for a reduction in response time for pricing complex spreads. Enhancements have also been made to the market making engine, allowing for optimal quote prioritization. Clients also have access to the CityXchange (CX) API to build and integrate their own connectivity adapters.

Upgrades and enhancements in Metro 4.1 include visualization and infrastructural expansions as well as a statement reconciliation feature that reduces operational risk and supports detailed drill-down views of reconciliation matches and discrepancies. Improvements have also been made to boost risk reporting and flex trades support in Metro.

Demand for algorithmic trading is directly correlated to a spike in message traffic in the U.S. derivatives markets.

The Options Price Reporting Authority projected at the beginning of 2013 that firms would need 3.53 Gigabits per second of bandwidth to handle its consolidated feed of U.S. options quote and trade data by July 2013, rising to 4.00 Gbps by January 2014, and 4.24 Gbps by July 2014.

A unique feature of Freeway is The Algo Store, an online algorithm repository which can be used to create, purchase and download algorithms, as well as view various algorithm examples. Third-party quantitative analysts are able to use The Algo Store to write and sell algorithms or components to traders around the world.

Traders can customize algorithms in either Java or Scala code. The algos execute trades, dynamically reconfigure themselves based on changing market conditions, and perform market analysis, including historical comparisons and risk monitoring.

“Freweway offers traders the ability to fully customize trading ideas, test them with live market data, and put them into production in a matter of hours,” David said. “We’ve created a community where certified developers can code algos for Freeway and sell them via The Algo Store.”