Is the Sell Side Meeting the Buy Side’s Algo Needs?

Following on from my last article – Low Touch Trading – The Transition from Algos to Service, I had the chance to reflect on another area covered at the recent FIX Conference. During my panel on the changing needs of the Buy Side from the OMS/EMS perspective, we polled the audience to see if the Buy and Sell Side aligned regarding technology priorities.

Question: What is the Buy Side’s top technology priority with respect to their order flow. 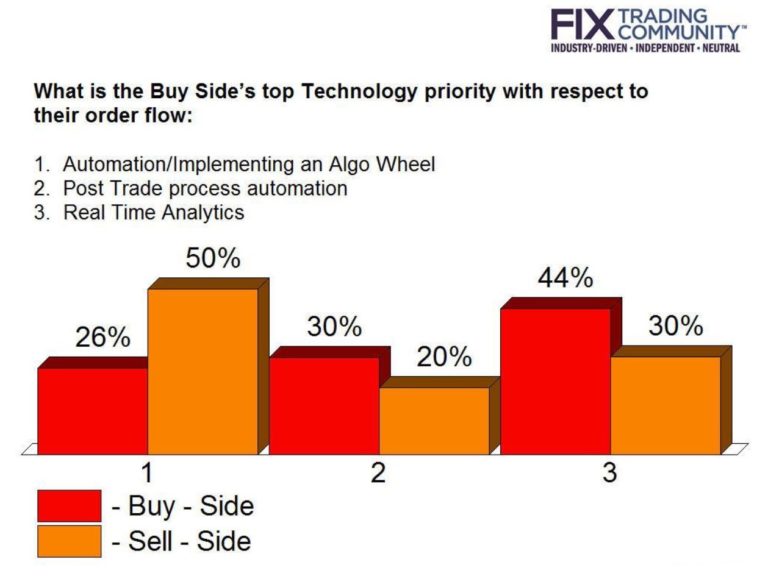 As you can see, the results indicated a considerable disconnect between both side’s focus, and what followed was a great conversation drilling into these differences.

We started with Post Trade process automation. While this was seen as the least important option from the Sell Side point of view, the panel’s take is that this was, or should be, almost fully priced in by both sides. Post Trade Processing has been a primary area of focus over the past few years and has seen the efficiencies and standards adopted by Equities and FX, creating significant savings in Listed Derivatives and Fixed Income.

When you consider the stance of those people responding, you need to look at both their person’s asset coverage and pain, which may be why nearly one third of the Buy Side polled this as their top priority.

Next up, Real Time Analytics, which was polled as the highest priority by the Buy Side. While this is a broad topic that could cover everything from TCA to Venue Analysis, the Buy Side participants on this panel focused this as providing in-flight order analytics related to orders performance (e.g. slippage vs benchmark or projected completion), and metrics used in house by the Sell Side (e.g. expected volume for the remainder of the day). These are both tools that the Sell Side have, and use to manage their client’s order flow, but it seems they’re underestimating the value that sharing this information would give the Buy Side. It’s unclear exactly how this information could be trafficked between both sides, what the unintended consequences may be (market data fees anyone?), or even where this could eventually end up (perhaps a Buy Side trader engaging with a bot over chat to get updates on their orders). But one thing was clear, the Sell Side need to recognize this hunger for data from their clients and define how to provide it.

The final and most interesting views were those on the Algo Wheel/automation. The Sell Side identified this as the highest Buy Side technology priority, whereas the Buy Side answered with muted enthusiasm. The concept of the wheel, and automation more generally, is of huge importance to the Buy Side. Automation brings with it massive efficiencies, and those Buy Sides that have employed these systems have experienced an opportunity for growth without loading costs and overhead. The Algo wheel is the final piece to this process, boiling down different Sell Side Algo Suites to a common set of factors, making results between brokers comparable and removing trader destination bias.

So why the huge disparity? My take is that the Sell Side sees being a destination on a client’s wheel as a must have. Other than post trade execution performance, the Sell Side can’t influence the Buy Side’s routing decision, so just being there is essential. From the Buy Side’s perspective, automation is still a relatively new concept, and while it is being embraced by the early adopters, barriers to entry exist with both the Buy Side OMS/EMS technology and the traders themselves.

Tying this back to my previous post discussing this panel, the results leave me with an uneasy feeling. On one hand, the Sell Side is definitely seeing an increase in the use of the Algo Wheel, leading to a boiled down simpler set of parameters. On the other, customization is king, and both the Buy and Sell Sides see a broker’s ability to support customization of their Algo service as providing value and stickiness respectively.

So which is the right conclusion, standardization or customization? As odd as it may first seem, I don’t actually believe these two paths are as polar opposites as they may appear. At Fidessa we are witnessing the rise of the wheel first-hand. The broker’s reason for being a destination is obvious, but the wheel is not necessarily the single solution for every order. If an order is not ripe for automation, it goes to a trader to manage. This may then be called, IM’d or sent electronically to a High Touch or Low Touch desk, but at some point this more complex order will be executed. That’s where the broker needs to show their mettle, and where the flexibility for customization, and delivering on ‘execution as a service’ comes to the fore.