Beyond Speed and AI: Technology For Better Markets

Five years ago, Michael Lewis set off a firestorm in the trading community with his bestseller Flash Boys, accusing high-frequency traders of robbing innocent investors to the tune of untold billions each year.  Unnuanced, for sure, the book nonetheless captured for the general public a problem institutions had been wrestling with for eons—how to buy and sell stock without leaking information to those, such as latency arbitrageurs, with the ability to profit from it at their expense.

Five years on, it’s difficult to say we’ve made systematic progress toward creating a marketplace in which institutions can transact safely and efficiently—that is, without having to arm themselves with costly technology to negate the speed advantages of costlier technology designed to extract and exploit information from their trading activity. 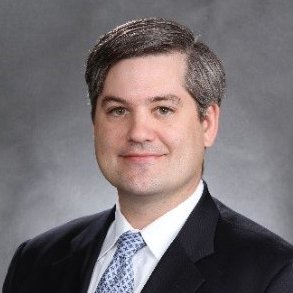 As always, though, we’re told that tomorrow’s technology is about to solve the problems created by yesterday’s.  This time, it’s in the form of so-called artificial intelligence—that is, moving from “dumb” algorithmic trading, which does what it’s programmed to do, to “smart” algorithmic trading, which continually adapts algorithms based on what the system learns about the changing outcomes.  By some estimates, AI already controls about 80 percent of stock transactions.

Unfortunately, AI will never solve problems of adverse selection in trading.  It will only, at best, mitigate them temporarily.  The reason is what’s known, in the realm of monetary policy, as Goodhart’s Law—or the phenomenon whereby any measure or target or observed regularity ceases to be useful once pressure is placed upon it by new behavior.  AI can tell me, usefully, to stop doing x and start doing y, but in an environment where AI is ubiquitous y will stop being profitable soon after I embrace it.

If I sound like a technological pessimist, however, I am not.  I believe that the technology exists, right now, to improve investor returns, systematically and durably.

How is this possible?  Haven’t I been arguing that someone’s speed will always surpass mine?  That someone’s intelligence engine will outsmart mine?  Yes.  But these are only problems because of endemic flaws in market structure—the way trading is organized.

Specifically, the problem is that our markets are organized to execute transactions bilaterally and sequentially.   That is, we trade with each other one counterpart at a time.  If I have 50,000 shares to sell, I might sell 150 to you at $50, then another 150 to someone else at $50, then another 150 at $49.99 and so on.  This process inevitably pumps signals into the market that a seller is active, triggering orders and cancellations designed to profit from the knowledge, at my expense.

But why trade like this?  What if I could simply announce to the market, anonymously, nothing more than the fact that I’d like to trade stock XYZ, and then let others—seconds or milliseconds later—say privately how much XYZ they’d like to buy or sell, and at what price?  And then match those orders all together, at the same time?  That is, multilaterally and simultaneously?  In a market structure like this, I could easily sell 50,000 shares without moving the market.

Don’t believe it?  Consider this actual trade, in precisely such a market structure. 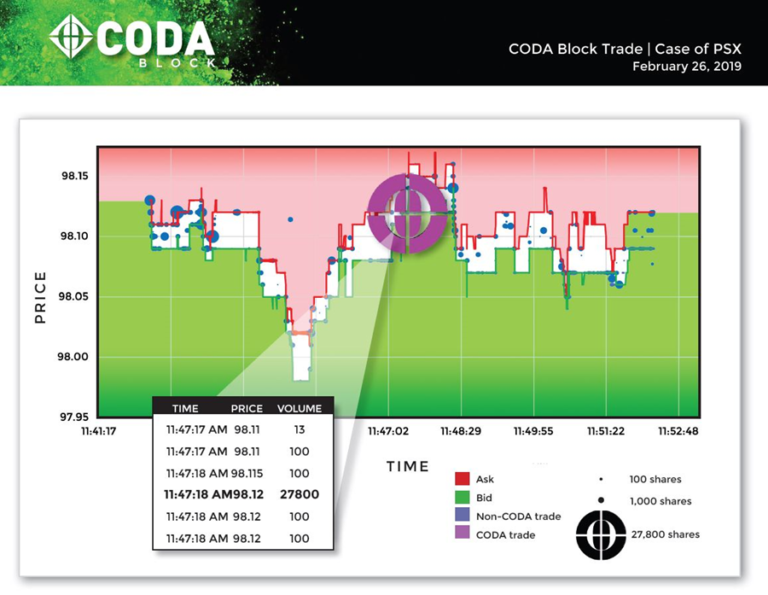 By initiating an on-demand auction in Phillips 66 “PSX,” a symbol-only alert brought multiple parties together, at the same point in time, to express their trading interest in the stock.  The buyer was able to transact the largest trade of the day, 139 times the bid/ask size, with minimal market impact.

This is the market structure my firm, CODA Markets, operates.  It is high-tech, for sure—all-day multilateral auctions need lots of computer power and good programming.  That’s where we’re putting our money.

So when, you might ask, will everyone start trading like this?  That is, institutions and liquidity providers alike, with no advantage for either?  Well, the biggest factor holding back mass migration to such a market structure is bad trading cost analysis.  If you measure something wrongly, you don’t know that you’re doing much less well than you could be.  Most TCA is just too unsophisticated to do proper counterfactuals—to compare the estimated cost of an immediate large-block multilateral trade with the cost of a long sequence of smaller bilateral ones.  We at CODA are working to help our clients build and adopt metrics to help them better capture the costs and benefits of alternative market structures.

In short, then, I am indeed bullish on technology in trading.  Not to shave microseconds, or to construct (ever-gameable) speed bumps to slow things down.  Not to add ever-more costly anti-gaming AI to counter the rapacious sort.  No.  I’m bullish on technology to build better market structures—structures that enable ever-growing volumes of multilateral trading.