Outsourcing can take many forms beyond the traditional hiring of an outside service provider. With the emergence of cloud technology, a company can implement a variety of new delivery models, including software-as-a-service (SaaS), infrastructure-as-a-service (IaaS) and platform-as-a-service (PaaS).

“There’s outsourcing where you basically hire somebody to do the job in a similar way that you would do it yourself, but you just want to have a third party handle it,” Bill Murphy, chief technology officer at Blackstone Group, told Markets Media. “On the other end of the spectrum, you’re using software-as-a-service to use technology more effectively instead of a traditional solution.”

He added, “We constantly use outsourcing in our business, just like most do, across a spectrum, but really where the huge efficiency gains are evident for us are on the software-as-a-service, next-generation technologies. The more we can leapfrog to that type of outsourcing, the more value add and the lower cost and the better efficiency that we can get.”

Blackstone has also made strategic investments in some IT service providers, such as WatchDox, a provider of enterprise systems to access, share and control sensitive documents on any device, and iLEVEL, which provides software-as-a-service technology to automate the collection, storage, collaboration, analysis, and reporting of portfolio data.

In 2013, it invested in ThoughtFocus Technologies, through which it established the Blackstone Center of Excellence, a technology and data outsourcing and offshore delivery center, to provide key technology and other administrative services.

According to Murphy, the focus shouldn’t be on outsourcing per se, but rather on the type of outsourcing and whether it’s a good fit for the business. 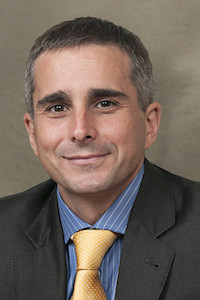 “It’s really about choosing the type that’s going to create the value and not just be optically well received,” he said. “We’re constantly trying to focus on results instead of following the herd.”

As senior managing director and CTO, Murphy leads Blackstone’s Innovations and Infrastructure team. He leads about 175 professionals out of a total of 2,000 employees at New York-based Blackstone Group, which works in private equity, investment banking, and alternative assets

The relatively low headcount reflects the company’s entrepreneurial roots. “Blackstone has 2,000 employees today, and I think it’s got the same small firm feel, frankly, it had when we were 400 about, when I joined,” said president & chief operating officer Tony James during the company’s second quarter media call.

The Innovations Group, which Murphy heads, is developing or implementing applications to make Blackstone professionals more efficient. “We have 2,000 people, which is pretty small for an organization with our broad focus,” he said. “Making every person as efficient as possible requires technology, and we spend a lot of time trying to make sure that we’re optimizing the use of technology by our professionals.”

Areas of focus for driving efficiency include applications development, customer service, “and everything to rip any type of friction out of our system,” Murphy said. “It’s as simple as making our newsletters better, to improving the performance of our finance applications, to ensuring that everybody has the right mobile device in their hands to be most productive when they’re traveling.”

He added, “It really comes down to constantly being vigilant around creating efficiency for our professionals. The good thing is that it’s a never-ending job, because you can always be better, so we just try to keep pushing and be as confident as we can.”

With outsourcing, it’s incumbent on the company to vet its suppliers and conduct thorough due diligence. “I like to think of my approach as trust but verify,” said Murphy. “If you’re working with somebody else, you’re doing it for good reasons, efficiencies and such, but you can’t bury your head in the sand and just expect them to be perfect.”

Cyber security is a perfect example. “Just because you’re not hosting the email yourself doesn’t mean you should forget about email security,” said Murphy. “You have to make sure that you’re continually evaluating your providers, such that they’re meeting the standards necessary for your firm.”