Everyone loves to give back to the community.

Wall Street and many notable celebrities did last Tuesday by partaking in the 16th annual BTIG Commissions for Charity Day held on its trading floors across the globe. The yearly event is part of a global initiative supported by the firm’s institutional trading clients, a growing list of celebrities and dedicated employees across four continents. Each year, the firm donates to hundreds of charities, many of them focused on children and others in need. This year the firm raised over $5 million dollars for charity. 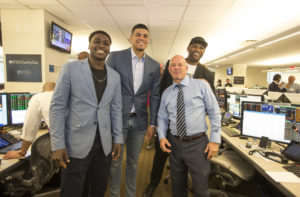 For the images from this year’s event, please click here

“This shows the good side of Wall Street,’’ said Steven Starker, co-founder of BTIG. “A lot of times Wall Street gets a bad rap. This is giving back to a lot of very good causes.”

Since pioneering its first Commissions for Charity Day in 2003, BTIG has donated more than $45 million to hundreds of charitable organizations, including more than $5 million from this event in 2017.

This year’s charities included but were not limited to: