The potential removal of broker crossing networks from the European trading landscape is causing much angst among the region’s buy-side community.

Proposals in MiFID II, a document that promises sweeping reforms to Europe’s financial markets, aim to do away with the crossing of blocks off-exchange by brokers. 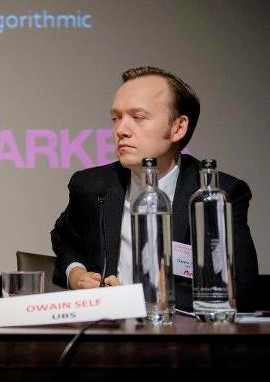 Owain Self, global co-head of direct execution and global head of algorithmic trading at UBS

“Regulators are determined to remove broker crossing facilities as a facility for brokers to provide execution services to match up buy-side orders,” Owain Self, global co-head of direct execution and global head of algorithmic trading at UBS, a Swiss investment bank, told Markets Media’s European Trading Investing Summit on October 11.

The use of broker crossing networks by the buy side has grown in popularity since the introduction of the original MiFID document in 2007, which introduced greater competition to the exchange space, and brought with it increased market fragmentation and a general reduction in order sizes on lit exchanges as high-frequency traders became dominant in the arena.

These developments have meant that European buy-side investors have been forced to split up their block orders on lit exchanges to avoid market impact and the predatory instincts of HFT, which has added further cost and complexity. Instead, broker crossing networks offer anonymous and quick execution of block trades, and broker control over these orders helps limit information leakage and improve execution quality.

Increased Transparency
However, European lawmakers are not keen broker crossing networks as they see them as essentially opaque over-the-counter operations. One of the central tenets of MiFID II is to bring increased transparency to the markets.

“The major thrust of MiFID II is unquestionably in the direction of market transparency: the frustration for many people is that this thrust may push too far in some directions, without making clear how it will address other fundamental issues,” said David Morgan, marketing director, trading and client connectivity at trading technology firm SunGard’s global trading business, in a MiFID II white paper published earlier this year.

“MiFID’s core objective is to protect the interests of the end investor and, at first sight, complete transparency may be perceived as serving those interests. But in reality the great majority of end investors’ funds are held and traded on a pooled basis by asset management firms, and these buy-side institutions of course often deal in large size when pursing their investment strategies.

“In the equity markets the buy-side preference is therefore often to contain the market impact of large orders by trading in the dark, and against the widest possible range of liquidity.

“The buy side’s core request—to be allowed to trade how and where it believes it can obtain the best results for its clients— appears not to have been acknowledged in the [MiFID II] proposals.”

Although crossing blocks off-exchange by brokers has been common in Europe for many years, it has become an increasing presence in the now competitive European trading landscape as broker-dealers have developed matching engines to electronify their OTC activities that were largely conducted over the phone in the past.

The original MiFID document in 2007 classified three types of exchange venue in Europe. The first governed regulated markets for existing exchanges, while a multilateral trading facility (MTF) category was created for venues that brought together buyers and sellers in a non-discretionary way and has been described as a form of ‘exchange-lite’. The third category was that of the little-used and, some say, poorly-defined systematic internalizer whereby an investment firm could deal on its own account by executing customer order flow and be required to publish firm ‘buy’ and ‘sell’ prices up to a standard size.

Broker crossing networks managed to fall outside of all three of these categories and MEPs argue that this is a breach of competition as they provide mostly the same services as the regulated venues without the same regulatory burden, be it pre-trade transparency or the implementation of ‘waivers’ for dark pool operations.

MEPs are now looking to push OTC equity trading on to systematic internalizers or MTFs, but neither of these venues seems the perfect fit for broker crossing networks.

“Every single person on the buy side has said to me they will not get the same amount of liquidity from these regulated venues as they do from broker crossing networks because of the discretion that the broker has with who they match up their flow against—the discretionary crossing service,” said Self at UBS.

“On that basis, the buy side is saying that if you get rid of the broker crossing networks I am not going to direct my flow to an MTF or an exchange—that flow is going to go backwards on to my desktop and it is going to remove liquidity from the market.

“Every single buy side has said this to the regulators. But the regulators still don’t want to allow that to happen. They are getting rid of broker crossing networks, that’s it.

“That’s also where we’ve had the biggest disconnect between what the buy side have all said will help with their transaction costs with their pension funds but the regulator seems determined that broker crossing networks are not viable in the future.”

Trialogue Process
The MiFID II document is now heading to ‘trialogue’, where the European parliament and the Council of Ministers—which represents the executives of the 27 member states and is soon due to finalize its stance on MiFID II—will have to come to agreement with each other, with input from the European Commission before MiFID II can enter law. It is thought the final agreement will happen some time early next year and MiFID II could come into force some time in either 2014 or early 2015. The Council of Ministers are believed to have a similar stance to MEPs on broker crossing networks.

All of this, though, could force buy-side investors back on to lit exchanges, precisely the places they have been fleeing in recent years due to the rise of HFT.

“The buy side don’t like the order book so are looking at other ways of trading blocks or trading away from the screen,” said Self at UBS. “But the regulation is pushing in the exact opposite way in that they don’t want trading away from the order books. Regulators want trading done on a transparent place and are trying to push all the flow on to there.”

A recent U.K. government sponsored study into trading, called the Foresight Project, which gathered evidence from 150 academics and experts from 20 countries, found that getting rid of broker crossing networks, or internalization, may not be the answer for improved market efficiency in a veiled attack on the European Union’s MiFID II plans.

“Some internalization of trades is necessary and beneficial, but there must be a limit, which if breached would result in negative outcomes for many participants,” it said in its October 22 report. “It is harder to say where precisely markets are currently located on this range of outcomes, so policy makers should err on the side of caution before being over-prescriptive about these practices.”

However, the current level of transactions conducted OTC poses a real threat to the order-driven model of the European cash equity market. Price discovery on the lit markets could be impacted if more market share is captured by broker crossing networks and other OTC venues, which could lead equity markets to become more quote-driven as in other asset classes. Thus, broker crossing networks could actually be destabilizing a vital functioning of the market.

“It is making price formation worse,” said Jason Rolf, a fund manager at Amati Global Investors, an investment manager, at the recent Markets Media conference in London. “There is less order flow on the screens and market depth is not usually there.”