It was late morning on a Thursday when we caught up with Stephen Wilson, and twenty minutes into our chat, the affable Master of Whisky had yours truly–a single-malt devotee–drooling as he described a winter drink made with their blended scotch: “the other day, a chef of ours made this incredible drink: we experimented by putting hot chocolate with some Gold Label, and oh boy, let me tell you…it was amazing”. 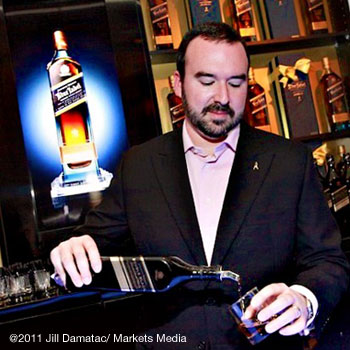 Wilson went on to recommend a cocktail combining ginger beer with Green Label and another that mixes Gold Label with apple cider and bitters (his holiday cocktail recipes are below).

“My key thing is that there is no right or wrong way to enjoy whiskey. It always comes down to what you prefer: you could add water, add ice, or make a little scotch cocktail”.

Of course, we also focused on how to consume Johnnie Walker’s various blended whiskeys–I personally prefer Gold sipped on rocks–and on what makes their latest blend, Double Black, so special:

“The idea behind Double Black started because we thought about all the things folks love about Black Label. There is the smokiness, the rich fruit, the vanilla that’s in a glass of Black Label. And we thought, what can we do to amplify that flavor, to build upon it? We brought in the Islay single malts to really amplify the smokiness. We also used very heavily charred casks which gave us a richer, more robust flavor as well. So by combining those with the DNA of Black Label, we created Double Black. It’s a whiskey that’s been in Duty Free for about a year and a half, and we just launched it in the US in October, and it’s a whiskey folks have been asking about, so it’s a pleasure to be able to share it now.” Wilson went on to mention that the Double Black expression, released this past October to the U.S. market, is a limited edition. “Don’t worry about when it’ll be gone; just enjoy it while it’s here”, he laughs.

There are, of course Double Black’s older–and rather varied–cousins: Red, Green, Gold, and Blue. When asked which of the blends is his favorite, Wilson admits to having been partial to Black Label since he first started drinking (“since legal drinking age, of course!” he adds with another laugh). “Black Label sets the benchmark on what a great scotch whiskey should be. It has so much depth of flavor and so many layers. I love Black Label on the rocks, and I love to make a cocktail with Red Label. It has a sweeter spice, a vibrant flavor, and it really shines through in cocktails. Gold, I generally do neat. I usually put it in the freezer–ice cold out of the freezer and neat really amplifies the creaminess, the honey, a nice long finish”. As for Johnnie Walker Green Label, the least well-known of the family, Wilson says, “It such a special whiskey–it’s strictly a blend of single malts. It’s unique as far as the Walker whiskeys are concerned”.

Blue Label, the most vaunted–and pricey–of the varieties, focuses on rarity: “With Blue, we’re looking for unique whiskey, rare whiskey, and aged whiskey. With unique whiskeys, we’re talking about that little bit of magic that can happen in a cask. With rare whiskeys, because we have such a huge amount of whiskey aging, we have whiskeys from distilleries that no longer produce the whiskey, or sometimes the distilleries no longer exist. So we have those hidden gems in the world of whiskey. And sometimes, we’ll look for whiskey 20-25  years in age or older that have that amazing quality. So that’s what we look for in a Blue Label, but still, the flavor has to be consistent” Currently, Wilson says that Johnnie Walker has approximately 7.4 million casks of whiskey aging–and that fully one-third of the distilleries in Scotland are owned by its parent company, Diageo (the alcoholics beverage giant whose brands also include Smirnoff, Bailey’s, Guinness, and Moët Hennessy). With that kind of breadth, Johnnie Walker’s Master Blenders have the ability to utilize the distinct characteristics of whiskeys from Scotland’s many regions.

Attending a private tasting is, of course, one great way to sample and learn about the Johnnie Walker family of whiskeys: “Right now, through December 23, we have a lot of small, private tastings going on at a space we have on Greene Street” in New York City. To attend, Wilson suggests a visit to Johnnie Walker’s Facebook page, with the requisite click on the “Like” button to enter,  and a click on the “Tastings” button on the left side to register (this writer has done so for December 17 at 6 p.m.–if you register for that slot, e-mail jill@marketsmediallc.com, and we’ll sip, hang out, and learn blended whiskey together). Readers in other U.S. cities need not despair: two national tours, called The House of Walker, run each year–fans in Chicago can look forward to a tasting this coming spring or next fall.

Gold Label Frost (a variation on the hot apple toddy…but cold and with a flavor twist):

Glassware is your choice (this is excellent in a rocks glass). Wilson adds that if the Gold Label is frozen–the way he prefers–he’ll sometimes serve it up (without ice and in a chilled glass).

Glassware is, again, your choice (I would do this in a highball glass). Serve either up or on rocks.