Can We Get Closer: What’s Next in Co-Location?

Data centers are becoming the trading floors of the 21st century.

Firms implementing high-frequency trading strategies are faced with decisions on where to physically locate the servers that receive data and execute trades.

“People who trade utilizing co-location tend to use arbitrage strategies. When you move out of the co-location space, you’re in what’s called the proximity space. That’s where you’re very close to the market, but you’re optimizing your links to all the various markets simultaneously. The software you’re using needs to access multiple markets at the same time.”

Even if a firm is not physically co-located at or in close proximity to an exchange facility, it will utilize high-speed connections.

“There are longer term investors, who have multiple 10 gig pipes connected to our infrastructure,” said Henderson. “They may use it for market data but also to send trades to us.”

Community of Interests
The concept of a capital markets community, or financial ecosystem, involves a series of data centers interconnected by networks, through which transactions, data and services can be shared.

NYSE Technologies, for example, recently announced that it was opening up its data centers to third-party network providers and vendors, allowing for the first time for them to offer their services within NYSE Technologies’ two data centers in Basildon, just outside London, and Mahwah, New Jersey.

When placing orders to an exchange, a firm will want to do so from a server in close proximity to the exchange’s matching engine.

However, many trading strategies will involve placing orders on multiple exchanges, in which case the firm needs to consider the travel times to separate matching engines.

If, for example, a firm were executing a pairs trading strategy involving trades on companies that have similar characteristics but trade on separate exchanges, then the optimal geographic location would be somewhere between the exchanges’ matching engines. 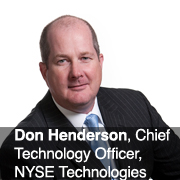 The New York metropolitan area is unique in its concentration of matching engines: NYSE’s matching engine is in Mahwah, in the northern part of New Jersey, and Nasdaq’s is in Carteret, in the south of the state. Secaucus, located approximately midway between Mahwah and Carteret, is therefore a logical point from which to execute a trading strategy.

“We have clients who will make trading decisions from Secaucus, and fire off trading signals to Carteret and Mahwah,” said Andrew Brook, chief technology officer at Selerity, which provides event data to high-frequency traders.

A new 40G option, or 40 gigabits per second, offers customers at the Nasdaq OMX data center the ability to access all of the exchange group’s U.S. markets through a single ultra-low latency connection.

“Network latency on 40G is expected to be reduced by an average of seven microseconds roundtrip compared to the current 10G connectivity option available to co-location clients,” Stacie Swanstrom, head of access services at Nasdaq OMX, told Markets Media earlier this year.

Nasdaq OMX Access Services operates Nasdaq OMX co-location, which provides customers the opportunity to place their own trading systems within the Nasdaq OMX Data Center with equal distance to the matching engine.

Over 200 securities and trading firms are located in its NJ2 data center in Weehawken, New Jersey, including investment banks, broker-dealers, market makers, prop and quant traders, and service provides.

Matching engines for five of the nine largest U.S. equity dark pools are located in NJ2, which is responsible for half of the average daily volume traded in U.S. equities dark pools.

A raft of new data centers are popping up all over Europe, allowing electronic traders the opportunity to place their own computers and wires as close as possible to an exchange’s trading machine, via fiber optic cables, helping to shave crucial microseconds off a trade.

London-headquartered TelecityGroup, Europe’s largest data center provider, now operates 30 data centers in eight key European financial hubs, and has been in expansion mode in the last few years, after an initial public offering in 2007, adding to its facilities and extending capacity at existing venues.

Other leading competitors in the European space, including Californian-based Equinix and Interxion of the Netherlands, are also offering new data center options.

Interxion, which, analysts say, operates Europe’s most “interconnected” data center in Frankfurt, and also has 29 data centers in 11 financial hubs across Europe, is also in the process of expansion, adding a second facility in Madrid.