The Four Corners of Compliance

Compliance isn’t a check-the-box exercise but is a dynamic process, central to the well-being of a firm.

Not adhering to this can carry severe consequences.

Last fall, the SEC charged three investment advisers with failing to implement key compliance requirements, as called for by the Advisers Act Rule 206(4)-7, the Compliance Rule. These weren’t oversights, but deliberate failures. 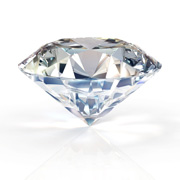 The cases sent a clear message, one that the SEC Enforcement Division’s Asset Management Unit wants advisers to understand. Failing to implement required controls, or not follow them, has consequences. So, too, does a failure to identify and address risks and conflicts.

SEC registered investment advisers are required to adopt and implement written compliance policies and procedures reasonably designed to prevent violations of the Advisers Act and the rules thereunder.

“The ‘reasonably designed to prevent’ language is risk and conflicts management,” said Mark Berman, a former SEC lawyer and chief executive of CompliGlobe, a London- and Hong Kong-based provider of regulatory and compliance services for asset management firms.

“A firm must identify the risks and conflicts of interest arising out of its business, and create written policies and procedures reasonably designed to address these—preventing violations of securities laws. Failure to do so creates regulatory risk.”

Risk mapping is not a once a year process. “It’s dynamic and repeatable,” said Berman. “The most important tasks are to actively identify risks and conflicts, and create proper written controls to address them. Doing this helps prove to the SEC and an adviser’s ‘ultimate regulator’ – its clients – that risk management is a priority.”

Although the Compliance Rule has been in effect in the U.S. since 2004, Europe is looking to rapidly catch up. 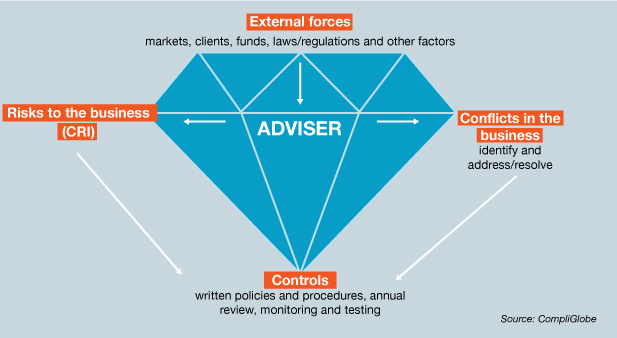 The Alternative Investment Fund Managers Directive (AIFMD) will require fund managers to review their compliance functions, particularly in relation to the way conflicts of interest and risk management are handled.

They are likely to require more compliance resources to cope with the burden of ensuring compliance with AIFMD. In many instances, the compliance function will be ramped up and will assume a far more important role in the practical operations and administrative tasks of the individual alternative fund manager.

“What is not clear yet from regulators is how many unintended consequences there will be,” said Martin Ekers, head of trading at Northern Trust in London, at WBR’s TradeTech Europe 2012.

The sell side has done more than the buy side so far in preparing for regulation, Ekers said.

“It’s very hard to do a huge amount [of preparation] before you know” what the rules will be, he said. “Most buy-side prep has centered around streamlining processes.”

The European Securities and Markets Authority (Esma) has begun discussions with non-European Union supervisors of entities subject to the requirements of AIFMD about supervisory co-operation issues.

This follows agreement by Esma’s board of supervisors to follow a common policy in relation to the co-operation arrangements under AIFMD, which should be in place between EU and non-EU securities supervisors by July next year.

Dale Brooksbank, head of European trading at State Street Global Advisors, has expended “enormous effort” over the past 18 months to provide regulators with information and data.

“I never thought I’d be involved as heavily as I have been in the regulatory debate,” Brooksbank said at TradeTech Europe 2012.

Much uncertainty remains regarding the course of regulation, but one certainty is that “there are going to be costs for our clients”, he said.

Esma’s co-ordination of the negotiation process will allow both EU and non-EU competent authorities to have in place consistent co-operation arrangements under AIFMD in an efficient and timely fashion.

“A heightened level of regulatory scrutiny and rulemaking is driving the push toward global compliance consolidation as regulators are now enforcing more rules and have broader jurisdictional reach,” said Jonathan Saxton, a member at professional services firm Kinetic Partners.

Consequently, firms are now developing internal policies that provide a consolidated approach to compliance on a truly global basis, rather than region by region.

“Global compliance policies increase overall efficiency by avoiding the duplication of work across multiple jurisdictions, while also reducing costs and improving the confidence of shareholders, investors and regulators,” said Saxton.

Forward-looking firms tend to view compliance not as a hurdle, but as an opportunity to reshape their businesses through improved recordkeeping and workflows.

While the initial costs are high, so are the rewards.

“Consolidating positions and instruments into a single repository, and automating front-to-back office workflows, is challenging but by doing so firms can gain a better handle on market performance and risk, which will drive alpha,” said David Kubersky, managing director of SimCorp North America, a provider of investment management systems.

“Those companies that choose the path of minimal compliance, of doing the least possible, are missing out on an incredible opportunity to revamp their business.”

Firms looking to build a global compliance infrastructure should consider a number of factors when reconciling their regional compliance policies under a single global regime, according to Saxton at Kinetic.

These include development of a global compliance manual; a code of ethics and personal employee trading procedures; adopting the higher regulatory standard where appropriate; operational risk reviews such as internal control culture and processes, risk control self-assessment and enterprise-wide reviews; and ensuring that the firm has access (either internally or externally) to adequate expertise to implement and manage a global compliance framework.