A little more than one in five asset managers, 22%, already are allocating to cryptocurrency, according to a study commissioned by Fidelity Investments. 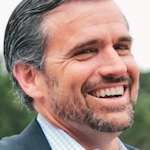 “The largest interest has been around the crypto-native hedge funds,” he said speaking during the DC Blockchain Summit. “Moving down the risk spectrum, we started seeing interest from traditional hedge funds who want to allocate, family offices, and increasingly RIAs.”

Of the respondents who already allocate to cryptocurrency, they expect to double their allocations over the next five years.

“I don’t know how much stock I put into that metric given it is five years away, but it is pretty interesting,” he said.

In the meantime, the firm continues to roll out its trading services to new geographies.

“We need a license in every state in which we operate, so the idea of being ‘live’ is a function of who you are and where you are,” said Jessop.

Fidelity has been developing its key-management infrastructure since if began mining bitcoin since 2015.

The firm has a very prescribed process to move assets, he said. “We have different teams involved who don’t know what the other teams are doing, so there is a separation of information and duty.”

The company stores keys in secure locations in multiple jurisdictions across the globe on devices that have never connected to a network.

“We work with accounting firms and auditors, who come in regularly audit our policies and procedures, participate in some of these key ceremonies,” said Jessop. “And we will be getting the requisite security audits probably as early as April and again before yearend.”