Sign up to receive exclusive articles on topics including: Select one or more newsletters you would like to receive:
Close popup
Home
By Robert Barnes, Turquoise
Latest News 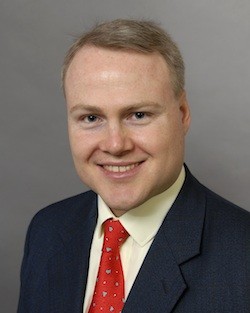 Developed market demographics mean that people are getting older and living longer, but governments and companies offer few new final salary pensions, so we have witnessed the rise of direct contribution schemes.

The 2001 Wise Men Report, sponsored by the Economic and Financial Affairs Council comprising the economics and finance ministers of the European Union member states, provided the example that an individual with a career of forty years wishing to retire on 35% final salary must invest 20% salary each year for 40 years if achievable real return is 2% – yet today many in continental Europe face low to negative interest rates.

Coinciding with these macro and demographic trends is the search by long term investors, including insurance companies and pension funds, for growth. This is increasingly sought from equities and through exposure to companies from countries without negative interest rates such as emerging markets.

Primary market trends
London as a financial centre has seen an increasing internationalisation of capital raising. For example, in 2017 nine out of ten of the largest IPOs on London Stock Exchange were in non-UK companies – two of which were GDRs denominated in US dollars settling in Euroclear.

This trend continued in 2018 with significant dual listings from emerging markets, such as the successful issuance of Slovenia’s NLB – the largest bank IPO in Emea last year; and from Kazakhstan, Kazatomprom – the largest uranium mining company in the world.

In April 2019, London Stock Exchange was selected as the sole listing venue by Saudi Aramco for its Global Medium-Term Notes programme, which raised $12 billion in five tranches, and covered many times by demand topping $100 billion. This listing set multiple records, including: largest order book for an emerging market bond, largest corporate bond from Middle East, Africa or Asia, and joint-largest oil & gas sector bond ever.

The same day, 10 April, Network International achieved a record IPO listing in London as the largest ever technology and fintech IPO from Middle East and Africa to list on a global stock exchange. It was the largest technology IPO on London Stock Exchange since Worldpay – itself the largest global tech IPO of 2015.

London has become the global listing hub for fintech, the ideal listing destination for these fast-growing companies to raise visibility with customers and suppliers, where investors appreciate the strong governance standards and stable legal and regulatory environment that contribute to the strength and depth of experience of the community of payments companies increasingly present here.

Secondary trading insights
Markets must innovate to deliver mechanisms that help investors deploy capital into equities while minimising slippage costs of buying and selling, particularly in today’s environment of low real returns. Searching for growth and finding liquidity in stocks – with minimal slippage costs – is integral to contributing to long term investment returns.

Turquoise effectively operates three parallel order books: one lit, one mid-point that also provides potential price improvement and quality execution for electronic blocks, and one for periodic lit auctions that welcomes orders of all size.

Investors are finding liquidity via Turquoise innovations designed in partnership with our stakeholders. Since launch in 2008, Turquoise customers have matched more than $8 trillion, and this number continues to grow with the increasing demand for equities of all sizes.

Figure 1 charts the number of stock symbols that trade each month on the y-axis against time on the x-axis from January 2013 to March 2019. 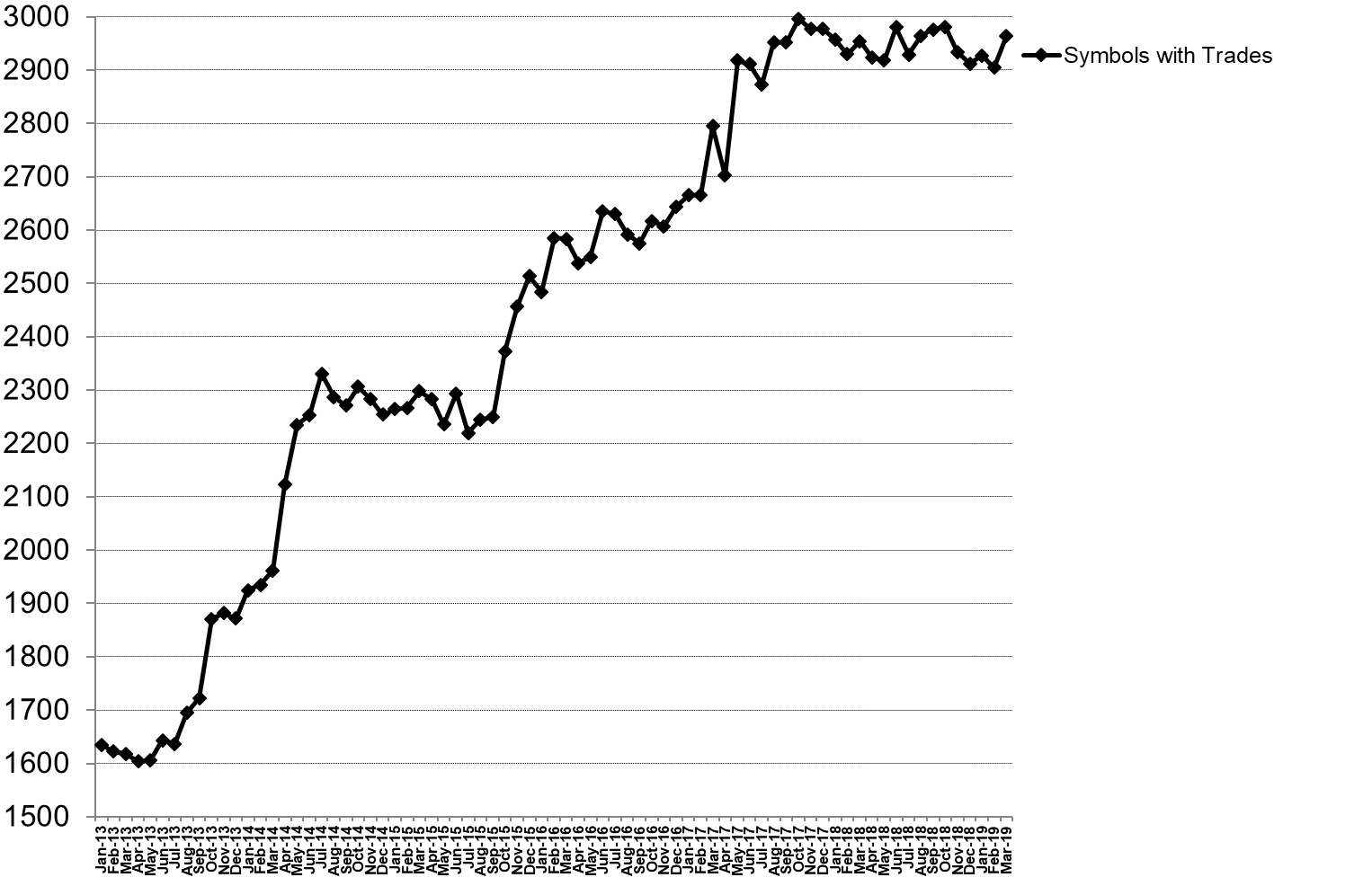 The observations are that the number of stocks in January 2013 active on Turquoise numbered less than 1700. By March 2019, more than 2,900 stocks had traded on Turquoise. Why does this matter? Because when one realises that approximately 80% of all value deployed onto all stock exchanges and platforms across the UK and Europe concentrate in just the top 300 blue chips, the fact that the number of active stocks is increasing – with a particular surge following the 2015 introduction of negative interest rates – demonstrates that investors seeking growth of returns in equities are succeeding in finding liquidity in blue chips to mid- and small-caps via Turquoise innovations designed in partnership with the buy-side and sell-side community that complement those of the primary exchanges.

Asset managers have published views about the role of exchanges in well-functioning markets and the need for innovation in mid-point and electronic block trading. A consortium of global buy-side and sell-side initiated Plato Partnership to study and improve market structure in Europe – they selected Turquoise as the industry’s preferred partner. At last year’s Asia Equity Trading Summit, asset managers shared insights on the success in Europe of the Turquoise Plato market model developed in partnership with the investor community.

Since then Turquoise Plato ended 2018 as the fastest growing and biggest dark pool – achieving all-time record activity. Turquoise Plato is now number one of 20 venues evaluated by Rosenblatt Securities. 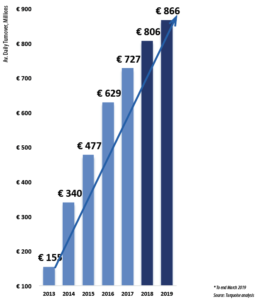 Turquoise Plato’s average daily turnover in Q1 2019 continues its trend of tremendous growth (Figure 2) by offering investors a single order book of multiple functionalities – continuous trading for immediacy and periodic random uncrossing featuring low price reversion after the trade – where pre-trade, no price nor size information is displayed to minimise market impact, and where after a trade, all price and size information is broadcast real-time to all market participants.

All Turquoise Plato trades match at midpoint of the primary best bid and offer for potential price improvement. Fast forward to March 2019, and customers using Turquoise Plato Block Discovery for larger sized orders have traded more than €180 billion ($202 billion). The insight is that continuous midpoint and electronic block trading at midpoint work and Turquoise is fully adopted by the global investor community, ready to scale beyond UK and European markets. 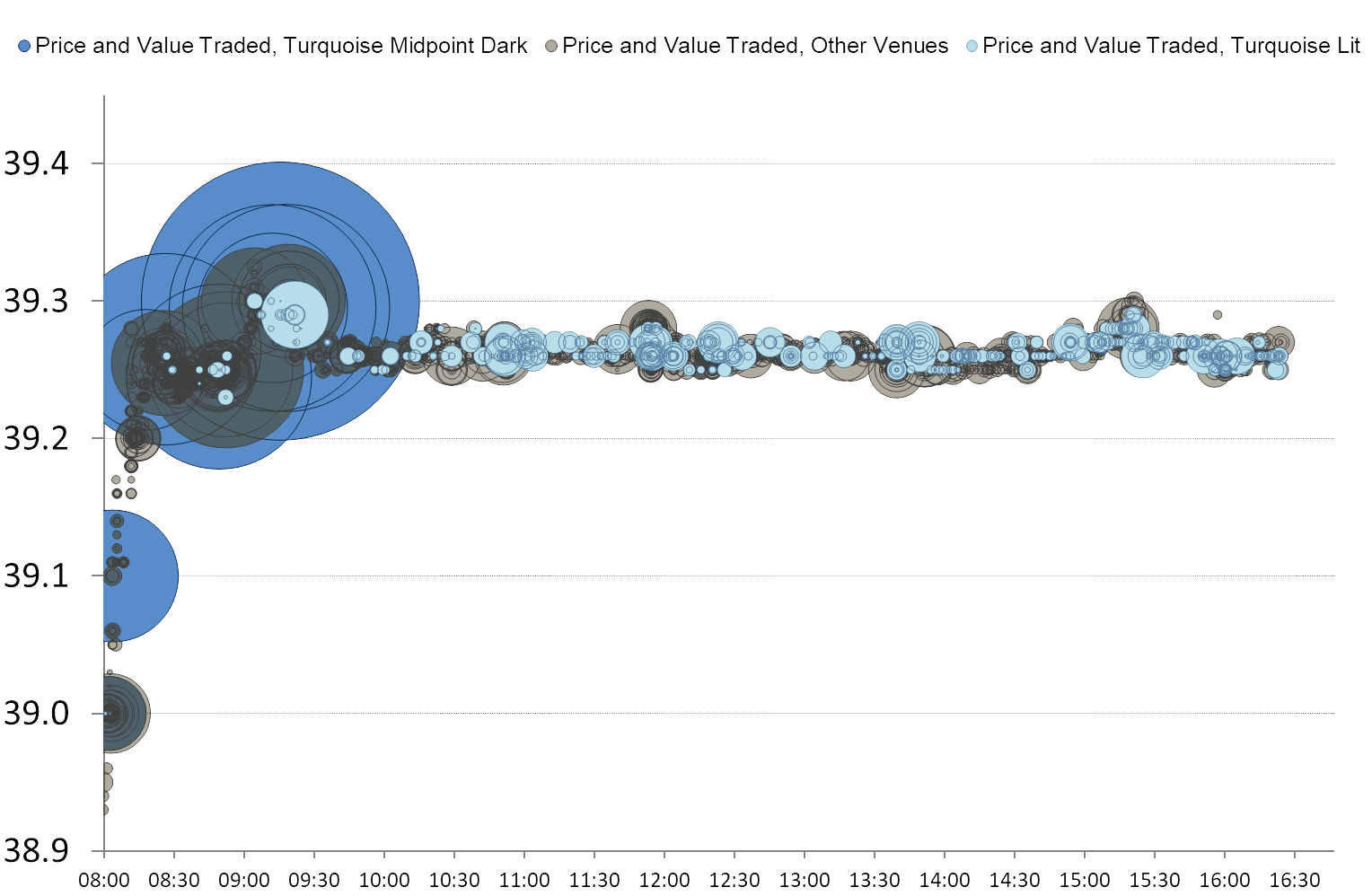 In this example, trading is fairly consistent on Turquoise Plato Block Discovery with most activity matching in the morning. This complements well primary exchanges where there is a relative peak ahead of the closing auction at the end of the trading day.

Turquoise Plato Lit Auctions offer another quality execution channel featuring pre-trade transparency and multilateral liquidity for trades of all sizes. While average sizes of European equities remain around €10,000 per trade, Turquoise Plato Lit Auctions has recorded trades both small and a material portion above large -in-scale, including trades above €500,000 in size spanning stock names of 15 countries. Quality is high with low price reversion recorded after trades.