The digital era in finance has been enabled to a large extent by developments that predated the Internet, in particular, the creation of the Financial Information Exchange protocol.

Brennan Carley, who heads the Thomson Reuters Elektron transactions and enterprise platform businesses, has monitored FIX since its inception in the early 1990s. In his view, the communication messaging protocol is almost single-handedly responsible for the electronic cross-border, cross-asset trading systems that have emerged as ubiquitous on Wall Street.

“The widespread adoption of FIX enabled not only the rapid expansion of electronic markets but also played an important role in leveling the playing field between brokerage firms, exchanges and (electronic communication networks), making it possible for firms to compete on price, execution quality and other value-add services,” Carley told Markets Media.

Carley leads Elektron’s business of connecting the buy and sell side, through products such as Autex, the largest global FIX order-routing network.

Thomson Reuters Elektron is built as an open, global, ultra-high speed and resilient network that connects financial-market participants and enables them to share information and trade on a single platform.

FIX has had the greatest impact in order routing, initially in cash and block trading, and more recently in algorithmic and systematic trading. “With our currently fragmented market structure, institutions have increased demand to get trades done in block size, and I expect that FIX based messaging will have a growing impact on the block trading world, primarily in the form of Indications of Interest,” said Carley.

IOI Focus
Autex IOI, which is under the Elektron umbrella, is an online real-time network for communicating pre-trade services between trading partners. Broker-dealers publish trade advertisements detailing key information including the size, market, direction, and unit price of the trade to the Autex system. At the end of the trading day, these ads are transferred to a database and aggregated by firm for ranking purposes.

“As a result of algorithmic trading, the entire market structure has shifted to small order sizes, and price discovery,” Carley said. “For institutions that want to trade in blocks, however, the need is not so much for price discovery as size discovery. The intelligent use of IOIs makes it much easier to trade in large blocks.”

The FIX protocol specification was jointly developed in 1992 by Salomon Brothers and Fidelity Investments, and the concept took a while to gain traction.

There were a number of proprietary protocols in use at the time, developed by brokers and stock exchanges. “Many of those exchanges and brokers — including Instinet, where I worked at the time — would have preferred to keep their proprietary protocols,” Carley said. “They were up and running, and once a customer had programmed to them, they were less likely to switch. So brokers and exchanges with existing protocols had a lot of reasons to resist FIX.”

The first adopters of FIX were asset managers and brokers, both for-profit entities, while the last adopters were exchanges and clearing houses, which at the time were structured as mutually owned non-profit utilities. “Sophisticated buy-side firms like Twentieth Century (now American Century) and Fidelity told their brokers that they wanted to use FIX,” said Carley.

While exchanges and brokers might have preferred to continue using home-grown protocols, it was inevitable that an open, customer-supported protocol would displace a number of proprietary protocols, users of which were not especially loyal.

Aside from FIX, other primary trading standards include ISO 20022, Swift, and FpML. FpML is optimized for over-the-counter derivatives, where deal structures and trading workflows are typically more complex than for instruments traded on-exchange.

Swift has developed several messaging standards, and focuses on inter-bank payments messaging and post-trade messaging. ISO 20022 is an umbrella standard that allows messages to be described in a standardized way.

“Current versions of FIX, FpML, and Swift messages are all described using ISO20022, and all of these organizations work together,” Carley said.

FIX has had the most impact on the pre-trade through trade stages of the trade cycle, which makes sense when one considers that the post-trade world remains centralized and standardized around a small number of industry utilities, for example the Central Securities Depositories.

“FIX has made some inroads into the post-trade market, in particular in the area of trade allocations, and I expect that this will continue to grow as it is a natural extension of the existing FIX-based workflow,” said Carley.

Post-Trade
FIX Protocol Ltd has issued updated guidelines for the use of FIX for post-trade processing. The guidelines encourage the increased use of FIX for creating a standardized approach to workflows, reducing dependency and risks associated with post-trade processing, and eliminating matching ambiguity and the need for complex matching algorithms through the use of standardized trade identifiers.

“In addition to its expansion into different asset classes like the OTC markets, FIX has the potential to streamline post-trade processes,” said Carley. “The primary area where FIX is not used extensively today, and which could benefit from greater FIX adoption is post-trade, which would allow firms to leverage current FIX-based systems, and end-to-end processing of messages.”

As the tolerance level for post-trade inefficiencies wanes, the industry is witnessing a determined drive to adopt free, open and non-proprietary standards as the platform on which firms can manage their operational risk and cost base.

“Post-trade STP standardization using the FIX protocol is increasingly important for our clients as they seek to enhance operational efficiencies, streamline processes, and improve resiliency,” said Michael Fiscella, executive director at Morgan Stanley, in a statement. 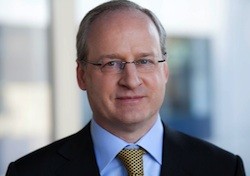 As FIX is being adopted in FX and in fixed income, it is following the same trajectory as it did in equities, but with an accelerator. Brennan Carley, who heads the Thomson Reuters Elektron transactions and enterprise platform businesses

As FIX gains traction in more asset classes, it brings with it significant synergies for some less latency-sensitive market participants.

“As FIX is being adopted in FX and in fixed income, it is following the same trajectory as it did in equities, but with an accelerator,” Carley said. “Firms that have already implemented FIX for their equity trading, especially those who have cross-asset trading strategies, have been among the first to adopt FIX for FX and fixed income, by leveraging their existing systems and skills.”

“Over the next few years, I expect that FIX will be broadly used across exchange-based or exchange-like asset classes, a category that will expand as regulatory forces push more trading onto an exchange-like model,” he said.

By establishing an easily implemented open standard, FIX has not completely leveled the playing field: brokers, ECNs, ATSs, Exchanges, and MTFs in Europe still have many opportunities to differentiate their execution services. But FIX has eliminated differentiation based on communications technology, and indirectly based on trading front-end systems such as EMSs and OMSs.

“Asset managers and hedge funds can use virtually any EMS or OMS to trade with just about any broker, ECN, or exchange,” Carley said. “The technical barrier has been lowered by FIX, and it has become much easier for the buy side to switch from one broker to another.”

“The FIX protocol has standardized messaging formats, and FIX networks have made the physical connectivity to many destinations easier and more cost effective,” he continued. “This has allowed electronic trading to become much more friction free, reducing cost, and allowing brokers and ECNs to compete on the basis of execution quality, market impact, and other services.”