Here’s something straight out of left field.

The Hong Kong Stock Exchange (HKEx) has entered the fray to buy rival London Stock Exchange for almost $37 billion, as first reported by the Wall Street Journal and confirmed by Markets Media.

However, there is one caveat – the deal is subject to the falling through of the LSEG’s previously announced deal to purchase data provider Refinitiv. That deal aimed to  bring the exchange into the market data business and help it compete with other data providers such as Bloomberg.

Laura Cha, chairman of the Hong Kong exchange, said the proposal was “a highly compelling strategic opportunity to create a global market infrastructure group, bringing together the largest and most significant financial centres in Asia and Europe.” 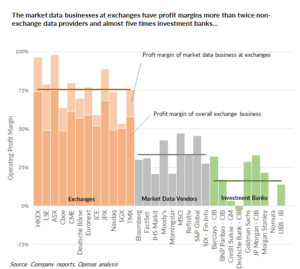 The London Stock Exchange said it “will consider this proposal and will make a further announcement in due course”. It called the proposal “unsolicited, preliminary and highly conditional.”

“This is, first and foremost, a data play, and a way for HKEX to snap up not only another exchange and get greater economies of scale, but also a way of massively expanding HKEX’s revenues from data. Data at exchanges, in general, has been extraordinarily profitable, but at HKEX, the operating margins on market data are a staggering 90%. It is easy to understand HKEX’s strategy on this front.”

HKEX said the deal would be financed through a combination of existing cash resources and new credit facilities.

Cha said the HKEX had been in contact with the London Stock Exchange and said it looked forward to “working in detail with the LSEG board to demonstrate that this transaction is in the best interests of all stakeholders, investors and both businesses.”