We traded e-mails with Mike in late March on how to eat, drink, and play like a native. Below is an edited transcript of the exchange.

1. What drew you to New Orleans?
I’ve been living here since June 2008. I’d been coming down here for Jazz Fest on and off since 1996, but it wasn’t until I met my fiancée Leah in 2007 and started spending time with her family down here (Leah was born on the West Bank of New Orleans, though raised elsewhere) that I realized I could live here.

New York is clearly the pre-eminent place in the country to hear modern jazz at its best. However, making ends meet as a jazz musician when you’re paying $1600 a month for rent and everyone in town is scuffling for $50-$100 gigs seemed…well…unhealthy. Already being familiar with the New Orleans music scene, and having played in various “New Orleans-style” groups up north before, I realized I was in a great position to do well in the Crescent City.

In early 2008, Leah and I decided we’d had enough of New York and that we were ready to be in New Orleans. The longer I stayed, the more I fell in love with playing the styles that predominate down here. Now I’m here for good.

2. How has the spirit of the city infused your music? How does New Orleans jazz compare with other cities?
There’s a very particular feel to the beat down here. It permeates everything New Orleans musicians play, and I think it comes from being below sea level, like you’re walking through a swamp. It’s a lot like the concept of clave in Latin music, a groove rather than keeping time steadily like “1, 2, 3, 4, 1, 2, 3, 4.” Listen to the Meters — the drummer’s got it and the whole band is with him on it. I’m trying to figure out different ways to relate to that feel across different styles of music.

Jazz in particular is different in New Orleans because there’s a lot more of the blues feeling in it. The city is very tied to tradition and if you try to get too technical with the music, it probably won’t translate to audiences here as well as in New York, where it’s more about aloofness and obliqueness. Sure, you can find examples of each of those in either city, but I’m just referring to what predominates in each respective scene. 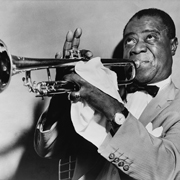 3. With Jazz Fest coming to the city, what would you recommend as must-sees for visitors?
Personally I’m going to hit Cee Lo and Tom Petty. But for visitors: Ernie Vincent, Kirk Joseph, the New Orleans Bingo! Show, Khris Royal, Soul Rebels, Shamarr Allen, Nicholas Payton, Don Vappie, Walter Wolfman Washington & the Roadmasters, Panorama Jazz Band… and that’s just the first weekend. But if you’re there on the second weekend, a must-see is the Neville Brothers closing out the Fest.

4. What lesser-known New Orleans jazz haunts would you recommend?
Upstairs at the Maison and the Blue Nile Balcony Room. They’re on Frenchmen Street, but each spot has a stage tucked away upstairs where the really hip stuff happens. Chickie Wah Wah has consistently great music and it’s up in Mid City. Three Muses is another nice spot on Frenchmen and they have great tapas. Antoine’s Hermes Bar in the French Quarter has a fantastic jazz lineup. To hear the real deal New Orleans jazz, check out Fritzel’s Jazz Pub. It’s one of the only places left to hear traditional jazz on Bourbon Street, Irvin Mayfield’s two clubs notwithstanding. The Rusty Nail in the CBD (central business district) can be pretty swingin’, too.

6. Where do you eat and drink?
I really like the Olive Branch Café in Mid City — it’s reasonably priced, friendly staff, and the food has saved my life many times. If price isn’t an issue, Green Goddess and Jacques-Imo’s are my faves. If I need a burger, I go to Port Of Call (watch out, those Monsoons will put you under the table). For the booze, I like the Avenue Pub’s crazy selection of beers, and the newly renovated Carousel Bar at the Hotel Monteleone for cocktails. Cure is also a top-notch craft cocktail haven.

7. What is the best thing about living in NOLA?
No open container laws, weather that suits me just right (i.e. above freezing 99% of the time), and a love for indigenous music, food and culture unmatched anywhere else I’ve seen.

8. If someone has just one evening in the city, what should they do?
Start by taking the St. Charles Streetcar all the way to the end and back. Then at 8 p.m., go to Canal and Bourbon (in front of Foot Locker) to see the TBC Brass Band in its usual spot. Cruise through the French Quarter to low-key Coop’s on Decatur for the Cajun Pasta, then saunter past the gutterpunks to Frenchmen Street, where you’ll get the highest concentration of consistently good (and varied) music within a few blocks. Most places don’t charge a cover. Or just stand outside and hear the brass band on the corner.

On your way back to your hotel, if it’s not crazy late, stop by the Hotel Monteleone’s Carousel Bar and get a Ramos Gin Fizz or a Sazerac as a nightcap. If it’s crazy late and you’re still on Frenchmen, dip in to 13 to get a late night snack — tater tachos — or head up Esplanade to Buffa’s for the tuna steak sandwich. And call a cab.

9. Has living in such an old city had an effect on you in terms of being in a place that’s more relaxed and soulful than, say NYC or L.A.?
I’m still the same stressbox I was in NYC (and San Francisco, and Providence, RI). But I’m more aware of the artificiality of stresses like needing to cut that guy off on a two lane road so I can get to the red light faster, and they lose their power over me a little. I always found NYC to be very soulful — I miss sitting at the long-gone Manhattan Deli on Broadway and Houston, sipping coffee and smoking hand-rolled cigs for hours, watching the people go by and wondering what it must be like to not be from NYC. Or the feeling of cruising Haight Street and looking at the gorgeous houses and thinking of what it must’ve been like in the Summer of Love.

But being in New Orleans is something different — it’s about defending, enjoying, nurturing, living, participating, community, and loving. Sure, our Russian-style institutionalized corruption, our high murder rate, our abundance of abandoned properties, and our notoriously horrific police department — and now this thing with the Saints’ bounty program — are stains on our reputation. But it’s still a community in progress, and through it all it has managed to remain in love with its own heritage and traditions.

10. What about the city’s supposedly haunted bars — Lafitte’s Blacksmith’s, or Pat O’Brien’s for example?
I dated someone once who always thought she saw spirits in places we’d go. That included my own bathroom, which kind of freaked me out. As for bars, the Old Absinthe House and Lafitte’s are plenty haunted, and not just by creepy barflies. Watch the Hurricanes at Lafitte’s though. You’ll have no idea what hit you, and if there is a ghost in front of you, you’ll probably see two of them.

11. Describe an ideal day-to-night in town.
For me, give me breakfast at Cake Café in the Marigny (best bagels around, no joke!), a bike ride along Bayou St. John and maybe up into City Park, and then down to Santa Fe on Esplanade for a watermelon margarita and some chips. Next, a short hang in Fortier Park, maybe a visit to Swirl, a local winery that sells bottles or by the glass, and then home to warm up on my horn. I usually gig sometime between 8pm and 1am. If I’m off, I try to find the Dana Abbott Band maybe at BMC on Decatur, or I’ll just cruise Frenchmen Street and see who’s playing where, maybe sit in somewhere like Cafe Negril, Vaso, or DBA. If the weather’s right, there are places like Mojito’s with outdoor music…

Stopping in to see friends who work at various places usually leads to a few drinks, making food a necessity. I like sushi…a lot. Wasabi is right up Frenchmen, conveniently. For something more substantial it’s either 13 or Buffa’s, though Mojito’s and the Marigny Brasserie have excellent menus. If I can still walk straight after that, I might take a cab to the Bayou Beer Garden in Mid City, for a nightcap.