Just as the London Olympics boosted long-haul air-passenger traffic this summer, so is a globalization of financial markets raising the stakes for electronic trades that are sent great distances, and the enabling infrastructure. Providers of trading technology are investing in long-distance telecommunications, such as fiber-optic cable, satellite, and microwave, enabling near-instantaneous trading across time zones and even oceans. Traders interested in far-flung markets tend to have shorter-term holding periods and comparatively modest order sizes, so the fastest route from Point A to Point B is of paramount importance.

“Across oceans, the question is not one of capacity, but of speed,” said Patrick Lastennet, director of financial-services marketing and business development at Interxion. “Companies are building new cable schemes to improve latency between key geographic locations.”

Perseus Telecom, a New York-based trading connectivity firm, has partnered with Indian telecom giant Reliance Globalcom to upgrade cables under the Atlantic Ocean at a cost of $30 million to $35 million. The goal is to offer round-trip speeds of less than 60 milliseconds on the critical London-to- New York route, down from 70 milliseconds currently and 100 milliseconds a decade ago.

By comparison, a trade can travel from New York to Chicago in 13.3 milliseconds, according to industry estimates. Light travels between New York and London in 45 milliseconds.

While microwave and satellite technologies shows promise, the workhorse underlying long-haul trading routes remains fiber-optic cable. “There is no other technology at the moment other than fiber optics that can do 5,400 kilometers between London and New York,” said Jock Percy, chief executive of Perseus. “You can’t shoot microwave an elliptical distance. It only goes 50 to 100 kilometers.” 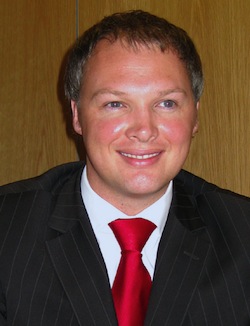 “There is no other technology at the moment other than fiber optics that can do 5,400 kilometers between London and New York.” Jock Percy

Summit, New Jersey-based Hibernia Atlantic is laying a transatlantic fiber-optic network cable called Express that costs $300 million and is expected to offer speeds of 59.6 milliseconds when it comes on stream next year. Express will reach other major centers in addition to New York and London, and will offer lowest-latency connections between Frankfurt and London and into Chicago, New York and Toronto, according to Hibernia.

In moving a buy or sell order from point A to point B, the shortest distance may not be a straight line, but rather one that traverses multiple hops and ends at a server located within a few feet of an exchange’s trade-matching engine.

As a byproduct of the rise of electronic trading, data centers have eclipsed trading floors as the venues where most transactions get executed, and as would be expected, capital investment has followed.

“The most important of these facilities from a long-haul communications perspective is 111 8th Avenue in New York City, which is a facility like no other in the world,” said Shawn Kaplan, general manager of financial services at Telx.

Occupying an entire city block in Manhattan’s trendy Chelsea neighborhood, 111 8th Avenue was bought by Google for about $1.9 billion in 2010. It is said to be one of the world’s most wired buildings.

Telx operates a “meet me room” for the entire facility, which connects carriers to financial institutions, financial organizations with the exchanges, and enables interconnection between a wide range of other companies. The building “is the landing ramp for international carriers looking to provide high-performance links” between the U.S. and overseas markets, Kaplan said.

Exchanges, on their own or in partnership with data-center operators, provide connectivity to their own trading venues as well as to ‘away’ venues. They also sell premium-priced rack space in close proximity to their matching engines.

Perhaps paradoxically given that longhaul trading routes are being upgraded, many technological advances in electronic trading over the last decade are meant to reduce the relevance of longhaul networks.

“The rise of co-location services offered by stock exchanges is a response to firms trying to minimize their remote connectivity and instead place their trading logic closer to the markets,” said Ian Jack, head of U.S. infrastructure at NYSE Technologies, the commercial technology services arm of NYSE Euronext.

“As long as there is distance between two markets trading similar instruments, there will be arbitrage opportunities.” Ian Jack, head of U.S. infrastructure at NYSE Technologies

“Now, exchanges allow customers to use their own data centers, in the interest of creating a level playing field, so firms are able to place equipment meters from the exchange systems,” Jack continued. “Today, the low-latency conversations are more related to the microseconds associated with the stack between the co-location hall and the matching-engine environment than in the milliseconds attributed to long-haul networks.” 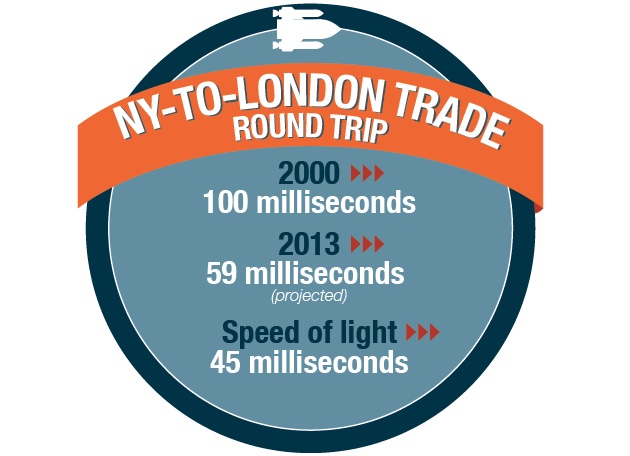 That’s not to say that long-haul networks don’t have their role. “As long as there is distance between two markets trading similar instruments, there will be arbitrage opportunities,” Jack said. “Customers taking co-location will always need to access that equipment remotely and provide data from other sources over long-haul networks.”

“Rather than firms buying their own lines, which is increasingly expensive as more international content is required and available, we look for ways in which customers can reuse their existing access into our backbone to receive other services,” Jack said.

A shared backbone “gives us the scale to achieve cost savings but also ensure that the network is reliable, secure and has no single point of failure,” Jack added.

“We have recently expanded our Asian network out from Singapore to Tokyo, and see a significant demand from customers wanting easier, pre-provisioned access from their trading equipment located there back to Europe and North America.”

NYSE Technologies plans to build and operate a SFTI Access Center at the Equinix NY5 data center in Secaucus, New Jersey. “We are often asked to provide guidance to customers on accessing the key financial venues,” said Lance Homer, senior manager of financial markets at Equinix.

In the New York market, access to the SFTI Network is often the chief interest for co-location customers.

“They want to understand the choices in terms of latency, cost and diversity,” said Homer. “Being able to directly cross-connect to the SFTI network allows Equinix customers to reduce their network infrastructure and provides them with a resilient solution and scalable bandwidth without the increasing cost trajectory.

The long-distance travels of a trade are addressed based on type of terrain covered.

“Across oceans the best and fastest technology is optical fiber, and across some terrestrial spans optical fiber is augmented by wireless solutions that are faster and provide traders with the ability to route orders faster,” said Percy of Perseus Telecom. “The telecommunications sector is a $2.1 trillion industry; global financial connectivity is a very small segment of this, with low latency connectivity an even smaller slice, but global low-latency spend is still hundreds of millions” of dollars, he said.

Each transport option — microwave, fiber, cable, satellite — has its niche in a wide-area network (WAN) topology, and capital outlays vary widely. The cost of building fiber across long terrestrial distances is high compared with wireless, but the offset is that there is a significant amount of unused fiber capacity, noted Percy.

“Optical fiber cables that cross oceans between major populations are numerous, and although the fiber count of these cables is lower, the capacity utilization rates are still very low compared with available capacity,” he said. “We are now able to upgrade existing systems by a tenfold increase in capacity through straightforward hardware changes at the cable landing stations.”

Firms are increasingly moving away from direct investment in deployed technologies, instead opting for hosted or cloud-based technologies for economies of scale.

“As trading technology continues to evolve at a rapid pace, many firms are increasingly wary of the inherent risks involved with undertaking costly and time-consuming infrastructure projects,” said Bill Ruvo, head of Elektron Hosting (U.S.), at Thomson Reuters.

“There’s clearly a conflict between the need for high-end infrastructure solutions and the desire to manage resources efficiently,” said Ruvo. “It’s hard to justify a massive IT spend for a project that will require refreshes and modifications continuously.”

The business of providing long-haul trade networks spans some well-known firms as well as lesser-known entities.

“The major providers of long-haul carrier services include Tata, C&W, and Telia,” said Lastennet of Interxion. “Hibernia and Perseus are the primary players for the transatlantic routes and Colt, eUnetworks, and Zayo (Abovenet) are key for the intra-European routes.”

Although fiber is generally the preferred option where latency is critical, “we shouldn’t forget that the majority of investment firms and exchanges are not in the low-latency race that the major investment banks and brokers run in,” said Chris Pickles, head of industry initiatives at BT Global Banking & Financial Markets.

“Solutions like satellite and retail broadband can be the most appropriate solutions for many market participants, and in particular in geographies that have a very limited communications infrastructure,” Pickles said. “The requirement for transoceanic communications is ever-increasing, not just in the countries that have major financial markets but also for countries that are developing their markets further.”

BT recently installed a major submarine cable from Europe to South Africa, a rapidly developing emerging economy. Wireless can be faster than physical cable, but the bandwidth leader in longhaul routes remains fiber. “(Wireless) bandwidth is limited and of course they can only be deployed across terrestrial routes,” said Percy.

Other technologies are farther-out on the horizon. Satellite communication is becoming less expensive and more reliable as companies such as Intelsat have developed specialist launch-andcontrol capabilities. Intelsat recently launched its Intelsat 20 into orbit, joining more than 50 other satellites owned by the company.

However, the latency of satellite connections isn’t low enough for stock, bond and derivative trading.

“The use of microwave requires a line of sight, and distance limitations result from the tradeoff between distance and bandwidth.” Roji Oommen 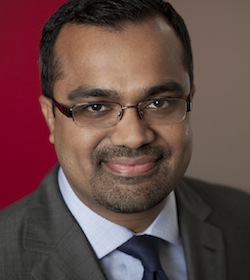 “Satellite is prone to weather impacts and is expensive for large capacities, as it is generally low bandwidth. Therefore, satellite is not suitable for large market data capacities,” said Roji Oommen, senior director of business development, financial services, at Savvis. “The use of this media introduces latency and requires backlinks for redundancy.” Developers say microwave holds considerable promise as an emerging low-latency technology, but its complexity is a level beyond fiber.

“The use of microwave requires a line of sight, and distance limitations result from the tradeoff between distance and bandwidth,” said Oommen. “Microwave is also susceptible to weather effects.”

“In the absence of any commercially available improvement to the speed of light over fiber, microwave is an area that has brought about a lot of comment in the industry recently,” said Jack of NYSE Technologies.

“While it’s not new technology by any means, the ability for firms to apply for licenses and increase the bandwidths previously offered means it can present a lower-latency alternative to longer fiber routes,” Jack said. “There are still bandwidth limitations, and we don’t necessarily see this replacing fiber networks for bigger market-data traffic, but it could provide lower-latency access for order routing.”

Ultra-low latency radio-frequency networks often require transitions to a physical interconnection point on an outside structure such as rooftops and tower, Sevret noted. “These structures, if equipped with dark fiber, can support ultra-low-latency connectivity into co-location and data-center facilities,” he said.