Winning an award is always quite a feat.

But winning the Markets Media Markets Choice Neil DeSena Market Advocate award is quite something else.

DeSena, whose 30-year Wall Street career took him from the back office at a clearing firm to managing director at Goldman Sachs to co-founder of fintech merchant bank SenaHill Partners, passed away unexpectedly in 2017. He was 52.

But in those brief 52 years DeSena built a legacy that not only included a Wall Street career but encompassed being a labor leader, veteran of two wars, and a community leader. He also served as a member of the Bayonne City Council for 20 years, including eight as the body’s president. 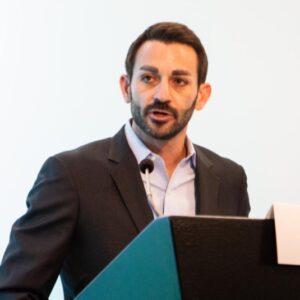 In the vein and honor of DeSena, the 2020 recipient Brad Levy, retired Partner at IHS Markit and Chairman Emeritus of FINOS, spoke with Traders Magazine after his win. He  traced his life journey and spoke about his interactions with DeSena.

Traders Magazine: Can you tell us a bit about your career in finance? What got you interested in the capital markets?

Brad Levy: Through the 1980s I took an interest in the markets, largely around stocks with my father and some of his friends.  The Value Line books were always laying around the dining table.  That all came to an abrupt halt in October 1987 and that crash changed me and my path in the short term after deciding accounting was the more stable way forward.  And then I stumbled into the bond market.  Back then BOBs… Boring Old Bonds…

I began my career in 1990 doing data entry, analysis and research in the municipal bond market while an undergrad at SUNY Albany.  This was led by Dr. Ron Forbes, who established the program for MBAs in the late 70s as he dug deep into the nuances of this market, including credit analysis and the swap and inverse floater market.  At that time, investment banking, sales and trading was becoming a highly attractive career path and this program was one of the few avenues to getting into the Wall Street analyst programs.  I was fortunate enough to land a spot with Lehman Brothers in the analyst program in 1992 in investment banking in public finance.  I focused on the quantitative and modeling side early, including working with derivative products and covered the public power and energy project finance areas.  I made a lateral move to the same role at Goldman Sachs in 1994 as a 3rd year analyst, which began my longer Wall Street run until I left Goldman Sachs to join Markit in 2011.

While at Goldman I had several career moves, including a shift from investment banking to underwriting and trading in munis in 1998, where I also took on the role of muni e-commerce lead.  In 2000 I left munis to join the FICC e-commerce team, working across fixed income, currency and commodity markets to drive the firm’s broader technology led strategies.  Focus during this time was market data, research content and electronic trading.  We evolved this group into Principal Strategic Investments in 2005, managing a $1b+ portfolio of venture and market structure related investments and utilities.  One of those investments was in Markit, a data focused fintech, which I joined in 2012 after being an active board member since the founding.   While at Markit I ran the Information Division including pricing and index business and later ran the MarkitSERV and Loans Franchise, until my recent exit in 2020.  Beyond my direct operating  roles, I have been involved in a Board capacity of a dozen fintech and market infrastructure companies including being Chairman of TradeWeb in 2011 and active in leadership roles at FINOS fintech opensource foundation, where I am currently Chairman Emeritus.

TM: How did you meet DeSena? Can you share an anecdote about him?

Levy: I met Neil early and often after the acquisition of SLK by Goldman on September 11, 2000.  We had many meetings for a few years to look at how to bring the franchises together and leverage the acquisition.  He was much more about the equities and exchange world and I was a fixed income OTC guy looking to understand how these worlds might relate more or blend someday.  This was core to my mandate and Neil was a key leader to drive this strategy forward.  We enjoyed each other’s company early and it felt natural for us to engage even though day to day our worlds and internal cultures we still far apart.  Maybe it was a Jersey thing or the passion to drive the firm forward and the industry forward.  Humor helped and enjoying a good debate.  These were still early days on the cross-asset class electronic trading front and through the dot com bust and 9/11.

We had many meetings internally at Goldman to figure out how we could leverage SLK franchise more including Redi and their strong presence in fixed income middle markets.  There one specific meeting with me and a few others on SLK team where I was pushing a few more aggressive ideas across Redi, WebET, TradeWeb and BondDesk.  There was a moment in the meeting and was clear others were not interested, were struggling with the dynamics of being acquired or something else.  Neil did two typical things in that meeting that turned into one of the more impactful I had with the team.

He first lightened the moment with some funny but obvious comment about the “Goldman guy telling us how to live” but then went into pitch that this was my job and while in the room with Partners and MDs, they really needed to listen to what I had to say and help.  The meeting turned on a dime for the positive and several in the room immediately dug into the details and we had great working relationships from that moment forward.  It could have been done after the meeting or not at all.  Neil is someone who would not and did not let that moment pass and turned it into an opportunity to make a better team.  He did it that day.  He did it often.

TM: Were you a mentor? What is your philosophy?

Levy: Mentors are made not born… they are creatures of the company they keep and the environment they are in…

Be flat and let them fail.  These two points have guided me throughout my career, even though I may have faltered at times adhering to one or both.  I have always worked on teams across a broad range of size, seniority and skill sets.  I value the work of being an individual contributor, but I believe deep down that you will always learn and achieve more as a team.  It sounds cliché, but it became obvious to me this was critical to achieving more at work and in life.  Early in my career at Lehman and Goldman I had I had several colleagues and mentors who bet on me early and I knew it.  I knew what that looked and felt like.  It was clear they needed me to do the work and put in some long hours, but even more clear they wanted to help me do the right work and get long term value no matter what the task may have been at the time.  They taught me to lead and let me fail and often put me in a position where I was leading even though I was much less seasoned.  These became deeply embedded principals for me that I have embraced throughout my career.

TM: Tell us a little about your mentoring efforts.

Levy: Working across the various functions, up and down the hierarchy and around the world is challenging.  It is also incredibly rich in diversity and creates many moments where you can lift others up and take them on a journey, they may not have even realized existed.  I have been built and mentored by many over the years.  I have taken that on myself wherever I can without regard to level, role or location.  Helping all grow all the time rather than by appointment and making sure I am growing with them has been critical to my personal development and incredibly fulfilling.  The top three things I have learned and have passed on is to be curious, work hard and have some fun.  I try to live this and work with others to find these in their own way.

TM: What was Neil’s biggest impact on you?

Levy: Being outside in.  That is the key thought that hits me when I think about my time with Neil.  He was always looking for something new.  Something that had not been thought of or an angle on doing something better that had been around for quite some time.  Neil was always present in the moment and a big presence.  An incredibly memorable and big voice with an ability to draw people to him.  He did not try to be the loudest and would often offer up that he was not the smartest in the room.  But he just believed letting others and other ideas in was critical.  Without boundaries as to where the message was coming from.  His passing was way too soon and the fact that there just aren’t many people that really want to hear what is going on beyond their world and how important that point has become has made me realize now how big a loss it really was.  I knew it then, but it is now shining through with the memory of his voice, his passion and desire to change what should be changed.

TM: How has Covid 19 impacted your “DeSena” spirit?

Levy: The current crisis has made my DeSena spirit a bit smarter and so much stronger.  Realizing in this moment how important it is to speak truth, let others in and advocate for the right ideas and for those who are trying to make them happen.  And always backing people, especially when times are tough a failure hits home.  This is a truly brutal time for so many people on the planet where big ideas need to push through fear.  Neil lived life every day like there was an urgency to getting the right things done now. And then tomorrow too.  That thought has never been more important to me and I am taking this spirit forward with high positive energy and great pride.

TM: What’s next for Brad Levy?

Levy: In the immediate, I plan to take each day as it comes and deal with all that comes my way or those close to me.  A little further down the road I expect to ramp up with another team where I believe I can add value driving us all to a higher ground as the markets and technology roll waves of change and challenges at us all.  Stay tuned!