The early-autumn political stalemate over the U.S. debt ceiling and possible default bumped up volatility, as markets could rise or fall a percentage point or two on any given day depending on whether the latest news suggested the impasse would break or linger.

Market commentators thrived on the action, teasing reports on ‘what it means for your pension and 401(k)’ — despite a general consensus that the latest political wrangling would most likely pass and be forgotten within weeks or months, and therefore hold no implications for investment vehicles that won’t be liquid for 10, 20, or 30 years.

Such is the conundrum for buy-and-hold investors such as Brandes Investment Partners. 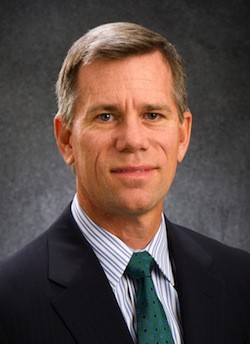 “The challenge is helping our clients block out the noise of the moment — the short-term news, the short-term price action,” said Brent Woods, chief executive of San Diego-based Brandes. “It’s always difficult for investors to try to stay focused on what we believe are the primary drivers of long-term returns.”

As a value investor, Brandes buys stocks and bonds perceived to be priced lower than they should be, on the expectation that the market price will at some point converge with true fundamental value. Growth investors focus on earnings potential and are less concerned with the price on the day of purchase.

“Price matters quite a lot to us, and our core objective is to find companies that we view as representing a deep-under valuation relative to a conservative appraisal of those businesses,” Woods told Markets Media in a Sept. 4 telephone interview.

Brandes managed $26.7 billion as of Sept. 30, spanning 14 equity and three bond products.  About three-quarters of the firm’s assets are in the flagship global equity and international equity products (global equity includes U.S. stocks); the rest is in emerging markets, small cap, U.S. equity, and fixed income. About two-thirds of assets are managed on behalf of North American clients, and the firm also has investors in Europe, South Africa, and Japan.

Brandes was founded in 1974 by Charles Brandes, who was once an acquaintance of famed value investor Benjamin Graham. “The philosophy he used when he first started to manage money was the Graham-Dodd value approach,” Woods said. “For all of the products we manage to this very day, including fixed income, we use a deep-value Graham and Dodd investment approach.”

Recent years have been a roller coaster for Brandes’ client commitments, as investor sentiment toward value stocks waxed and waned. After value returns handily beat growth for four consecutive years ending in 2006, value underperformed in 2007-2009, according to Standard & Poor’s.

“We were over $100 billion in 2008,” Woods said. “But ten years before that we were roughly the same size that we are today, so we’ve had an interesting cycle that has reflected the market over that time period.”

Brandes, which is privately owned, closed most of its products to new investors in the early 2000s, before reopening and ramping up assets between 2003 and 2007. Since then, “value has been going through a comparatively tough period,” Woods said. “But in the last year we’ve started to see some very hopeful changes in the way the market’s looking at companies. The fundamentals seem to matter quite a bit more, so our feeling is that we could be poised for some pretty good growth.”

Performance numbers bear out Woods’ trendline. Brandes’ global equity and international equity gained 28.1% and 26.7% after fees for the year ended Sept. 30, beating their respective benchmarks by 7.9% and 2.9%. Both strategies underperformed on a five-year basis, but for the longer time horizons of 15 years and 20 years, outperformance was in the order of 3% to 4% annualized.

“The expectation we try to set for clients is that you need to look at a firm like us over long time periods. By that, we mean a full economic cycle at a minimum,” Woods said. “Have we met performance expectations? I think the way we define it, which is to think very long-term, we have.”

With regard to specific stocks, Woods cited Microsoft and Chesapeake Energy as core holdings that embody Brandes’ style. “The investment case for Microsoft goes back a few years. They have a moat around their core franchise and a bulletproof balance sheet, and sentiment about the economy and the direction of the PC market had negatively impacted the market’s outlook,” Woods said. “People tend to be unexcited about the growth rate, and it just got pushed to the point where we thought it was unduly punished.”

Chesapeake’s chief executive quit in January amid criticism about personal loans and largesse with company funds. “We tend to be interested in companies who appear to have what we consider cyclical or perhaps temporary problems,” Woods explained. “In the case of Chesapeake, there were a number of corporate governance concerns. We looked at those and said these are things that the board may address or solve, so we don’t view them as permanent features of the company.”.

“Then we had a view that the price of natural gas was possibly below our expectation of a cyclical average price,” he continued. “These two factors produced an environment where the share price was trading at what we considered a very distressed level.”

As an active manager, Brandes suffered during the global financial crisis of 2008-2009 and in its aftermath, as stocks moved more in tandem with each other and with other asset classes. A loosening of those correlations in the past year or two has re-energized the mission of security selection and is serving as a tailwind to active managers.

Beyond that, recent market tops stand to benefit value managers, as lofty valuations of some market leaders give growth investor pause. “The stock market at all-time highs potentially bodes well for value investing,” said Tim Loughran, professor of finance at the University of Notre Dame’s Mendoza College of Business. “With firms like Netflix and Facebook trading at very high multiples, some investors will certainly be attracted to value investing.”

Loughran isn’t sold that value is a superior style overall. “Maybe value investing beats growth investing among the small firms,” he said. “However, for the large-capitalization firms, historically, there has been no significant difference in performance between the two styles of investing.”

About 60% of Brandes’ clients are institutional investors, including public and private pension plans. The rest of the firm’s client base is primarily retail investors who come in through broker-dealer partners and mutual funds.

Even with the change at the top, it has been steady-as-she-goes at Brandes: Woods cited only an office move from Geneva to Dublin, an office opening in Singapore, and a review of management structure and processes as specific developments since February. “This speaks to the fact that we don’t see a big change in our business strategy as a result of me becoming the CEO,” Woods said. “The path we’re on as an independent, dedicated value shop is the right one for us.”

As a ‘bottom-up’ manager, Brandes focuses on the balance sheet and earnings power of an individual company, rather than broad macroeconomic trends or geopolitical plays. “That doesn’t mean we don’t think about the macro,” Woods said. “When we analyze a company, we have to analyze the industry within which it operates. Then to analyze the industry, we have to have an understanding of the general economy and the regulatory environment.”

By definition, value investors buy what others aren’t interested in. In terms of Brandes’ recent macro calls, that has manifested itself in an overweight position in Japanese stocks, and a comparatively bearish stance on emerging markets that has turned more constructive in the past year or two.

“We tend to be somewhat contrarian, so we have a tendency to move or be interested in areas that are either controversial or are unloved, or appear to be experiencing temporary and solvable problems,” Woods said.

“Our world view is that we migrate to where we see opportunities for our clients. That’s tended to produce, at least today, more interest in emerging markets than we’ve had,” Woods said. “Europe has also been interesting to us, as it’s so beaten-up and prices are so reduced. We have had an overweight in Europe for a few years now.”

Brandes holds a stock for almost five years on average. Woods noted the low turnover keeps down trading costs, as does the firm’s investment style of buying when others are selling. Additionally, the firm’s trading desk, headed by sell-side veteran Joe Scafidi, holds its own.

“Since our portfolios hold assets from across the globe, we have established trading relationships with virtually all of the global brokers and many specialized, regional dealers,” Woods said. “These relationships enable us to not only diversify our trading coverage, but also help ensure we’re getting competitive pricing. And, most importantly, our traders are very adept at working the direct connections to the market and algorithmic trading.”

Brandes deploys a mix of in-house and third-party products for trading and technology. The firm has its own order-generation rebalance engine, which is integrated with a Charles River order management system and a Bloomberg execution management system. The company uses Markit for transaction cost analysis.

With regard to market structure, Woods indicated bigger-picture positives outweigh some “imbalances” that have arisen.

“As a general statement, we view the markets as highly efficient and market structure as pretty solid,” Woods said. “But we believe there are some imbalances. For example, the rise of high-frequency trading in the U.S. has been subject to great debate on the structure of the market and the interest of long-term investors. We’re monitoring this very closely, as are many others.”

Brandes has invested in IEX Group, a startup that aims to establish a trading platform for institutional investors to buy and sell large blocks of stock, without the distraction of potential gaming on the part of the shortest-term market participants. “The logic and the structure of the trading platform will be to ensure that there aren’t high-frequency traders in there sucking away any of the value in trades,” Woods said.

Brandes’ risk management is rooted in its buy transactions, with the goal to “achieve a large gap between the price we pay and what we see it being worth,” Woods said. “To use the Graham-Dodd vernacular, that’s referred to as achieving a margin of safety.”

In line with its stay-the-course investment methodology, Brandes isn’t big on being on the cutting edge of investment management. “In terms of innovation, we are fairly staid and fairly conservative,” Woods said. “We have not thrown up a whole lot of new products…by and large we believe the structure of our offerings makes sense, and we view our job as doing as well as we can for our existing clients in those products.”

Woods said one key challenge for pensions and other institutional investors is managing the trade-off between short-term concerns and long-term needs. “They need to generate returns, but at the same time there’s an aversion to volatility and a desire to try to minimize overall risk as defined by volatility,” he said. “Sometimes those things are in tension with one another, and I don’t think there’s an easy solution.”

Other investment-management trends are a shift away from equities, more appetite for non-U.S. assets, and pressure on management fees.

“We continue to believe that equities need to be part of the long-term solution for institutional end users,” Woods said. “The firms that do well will be those that generate value for their clients. The way we which we do that is to stay disciplined and focused on value investing.”