COMPETITION, FRAGMENTATION, AND TECHNOLOGY ARE AMONG PRIMARY THEMES FOR LISTED-TRADING VENUES 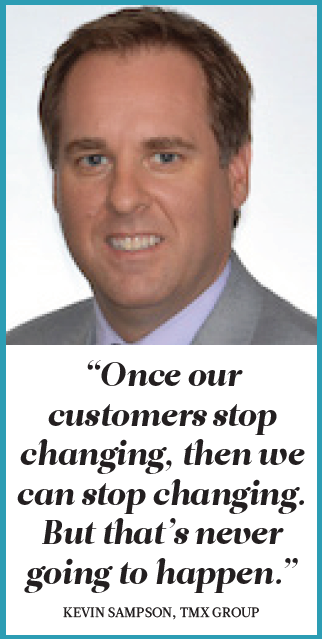 “One of the biggest challenges, which turns into an opportunity, is to always be relevant,” said Kevin Sampson, managing director of equity trading for Toronto-based TMX Group. “Markets are complex, people change, and regulations change. Once our customers stop changing, then we can stop changing. But that’s never going to happen.”

Exchanges have a long and storied history, dating back to the Buttonwood Agreement of 1792 that was the genesis of the New York Stock Exchange. Over the past couple decades, trading went electronic and regulation opened the business up to competition; more recently, pressing concerns include the scope of new regulations, building the scale needed to compete in a challenging market environment, and whether trading speed should be reined in.

“Market centers are always introducing new things — pricing structures, order types, different facilities and services,” Sampson told Markets Media. “We have to keep up with ever-evolving technologies. We need to leverage technology as an accelerator to introduce new products and services to meet the evolving and changing needs of our customers.”

“As exchange operators, we need to make sure that what we’re introducing — whether it’s products, services, structures, or facilities – is being done in a way that the focus is on meeting a specific customer need,” he continued. “We need to create efficiency and value for the customers in a focused and targeted way. This is especially important given the complexities of the market.”

The core business of exchanges — matching trades — has not been booming.

Average daily trading volume in U.S. stocks has been in the range of 6 billion to 7 billion shares. That has held about steady over the past few years, but the level is well down from 12 billion shares during the financial crisis of 2008-2009. The lack of growth — and the ‘commoditization’ of equity trade matching that has narrowed margins — has pushed exchange operators to increasingly rely on revenue from alternate, non-transactional sources, such as technology and market data.

There are also initiatives to expand into other asset classes and geographic markets.

“We’ve been future-focused on the intersection of financial services and technology to offer more services to our expanding base of customers,” Jeff Sprecher, chief executive officer of NYSE Group owner IntercontinentalExchange, said on an Aug. 3 earnings call.

“Data and trading are symbiotic and serve as integral inputs into our customers’ workflow,” Sprecher said. “For many customers, access to our data drives more trading, which in turn creates the information used for investing, for settlement, compliance, collateral management, reporting and numerous other functions, all of which drive the rising consumption of data.”

Regulation continues to be a big theme for exchanges. The U.S. Securities and Exchange Commission hasn’t aimed a lot of regs specifically at the exchange space, but as the nexus of the market ecosystem, most any rule that affects trading will hold implications for exchanges.

“One challenge is navigating a regulatory environment that is not always clear to us in terms of how the rules are being interpreted,” said Tal Cohen, senior vice president for North American equities at Nasdaq. “As we look to change existing rules, how we do that as efficiently and as quickly as we can together with the SEC and the industry as a whole?”

Specifically, Cohen cited the tick size pilot, which is meant to evaluate whether widening tick sizes for small companies will improve liquidity, and the Consolidated Audit Trail, which the SEC is developing as a way to have a more complete picture of market activity, as potentially problematic.

“On the tick pilot, we commend the SEC for not taking a one-sizefits- all approach, but as it’s currently designed, I don’t think it’s going to yield the outcome the SEC or the industry is looking for,” Cohen said. “It will end up being a fairly costly exercise for everybody involved.”

With regard to the CAT, “on the surface it looks very helpful, as it will allow regulators to better monitor activity across all the exchanges,” he said. “But it has to be done in a way that the costbenefit makes sense. I think we still have work to do there.”

The U.S. equity-exchange landscape is dominated by three operators: NYSE, Nasdaq, and Bats Global Markets, which combined run 10 of the 13 exchanges and match more than 95% of exchange trades. Market participants say a 13 equity exchanges is too many and creates unnecessary complexity and added costs, while offering only marginal added value in terms of choice and innovation compared with what a six-exchange universe would offer.

“One of the biggest trends in the industry is for exchanges to have more than one exchange,” said Brad Katsuyama, chief executive of IEX Group, which went live as the 13th U.S. equity exchange on August 19. “The purpose of an exchange is to match buyers and sellers with as little intermediation as possible. To fulfill that goal, each exchange company should really only have one exchange, to give people the highest probability chance of finding the other side of the trade.”

“By preventing the buyer from finding the seller, you make the middleman necessary to bridge the liquidity gaps between exchanges,” Katsuyama told Markets Media in a July interview. “It has actually empowered the middle man at the expense of the end user…You have 12 exchanges, but not very much competition, which is why you haven’t really seen a lot of market share changes. They’re all doing relatively the same thing.”

IEX went live as an exchange after almost three years as an alternative trading system. Normally a new exchange with market share of about 1%, as IEX has, wouldn’t make much of a stir, but IEX isn’t your typical operator. Spotlighted by Michael Lewis’ 2014 Flash Boys book, IEX’s differentiator is a built-in 350-microsecond processing delay.

The ‘speed bump’ is meant to negate the advantage of the highest-speed electronic traders and make a more hospitable market for institutional investors, who trade on behalf of the end-user ‘mom and pop’ investors. To be sure, it remains to be seen whether IEX will attract the order flow needed to compete with the big three, whose market shares are 10 to 15 times larger.

IEX has its detractors, who say it adds unnecessary complexity to an already complex marketplace, and

NYSE and Nasdaq have said they’re considering implementing speed bumps of their own, which could blunt IEX’s value proposition. But in its purest form, IEX can be seen as a referendum on the market’s acceptance of high-frequency trading, and the trajectory of the firm over the coming months will be closely watched.

“The past ten years of trading have been dominated by an IT arms race focused on speed and low latency,” said John Kerin, chief executive officer of Chicago Stock Exchange, which before IEX was one of the two smaller U.S. equity exchange operators, along with National Stock Exchange.

“CHX believes that the next few years will have more innovation focused on products that de-emphasize speed, such as speed bumps and on-exchange auction trading.” Another significant topic for exchanges is the ongoing rethink of Regulation National Market System, the 2005 ruleset that was meant to foster both competition among markets to promote more efficient and fair price formation. Reg NMS doesn’t apply in Canada, but there are some parallel themes with the U.S. market.

“Best execution is a big topic,” said TMX’s Sampson. “There’s general sentiment in the industry and among investors that increased transparency is required,” he said, citing order handling practices as a specific area of focus. Market fragmentation is another shared concern.

“Competition is a good thing, but the pendulum has swung quite a bit in our market, where we now have upwards of 11-12 market centers and we’re one-tenth of the size of the U.S.,” Sampson said. “That imposes a lot of costs on the dealer community. I think our market, and regulators, are recognizing that maybe we’ve gone a bit too far. We need something to manage those costs and the side effects.”

The SEC has recently proposed changes to the rules around disclosure of order execution and order routing, with the upshot being that market operators and order handlers will be mandated to disclose more information to the market participants who submit orders. Broadly speaking, this will likely benefit exchanges by raising the bar on the business of operating a dark pool.

“Global regulators will follow the example of the SEC and look to make trading within all asset classes more transparent,” said Kerin of CHX. “As demonstrated by recent moves in the equity world, the SEC is amending rules 605 & 606, which will require brokers to report trade handling practices. Regulations such as these will improve the confidence and integrity of investors and move institutional business towards more structured venues, such as exchanges.”

One of the important implications of the SEC’s June approval of IEX’s exchange application was the interpretation of immediate, in the context of qualifying as an automated quotation that can be executed immediately and automatically against an incoming immediate-or-cancel order. The SEC said as long as a processing delay is ‘de minimis’, it doesn’t preclude immediacy.

“Regulation will continue to shape how exchanges view the market. It will also shape the rate of change and innovation,” said Nasdaq’s Cohen. “From an exchange perspective, we’re at a bit of an inflection point, as the SEC just came out with a re-interpretation of immediate, which potentially opens the door up to some more creative thinking about how exchanges could provide value. It comes with challenges and with some complexity. It also comes with the opportunity to rethink our approach.”

“Scale continues to be a theme for exchanges,” Cohen added. “We have to drive to be the low-cost provider in our space, and drive value to our customers through adopting technology that drives better trading experience. There are promising new technologies that we can potentially implement over the next three to five years and really lead the charge in how exchanges work and operate.”

There are a lot of changes afoot and ahead in the exchange sector, but the core role of lit venues remains intact.