HAS THE NEARLY 20-YEAR-OLD EXCHANGE PRICING MODEL OUTLIVED ITS USEFULNESS?

IN A COMPLEX electronic equity marketplace with myriad points of contention, ‘maker-taker’ stands out as especially complex and contentious.

Under this exchange pricing model, market participants who provide, or make, liquidity via placing resting orders are paid rebates, while those who ‘take’ liquidity are charged.

Backers say maker-taker incentivizes market making, deepening market liquidity for all; critics say it distorts pricing and motivates brokers to prioritize rebates over execution quality. Institutional investors with longer-term holding periods generally look askance at order types, fee schedules, rebate tiers and other intricacies of market structure, and they can do without maker-taker. 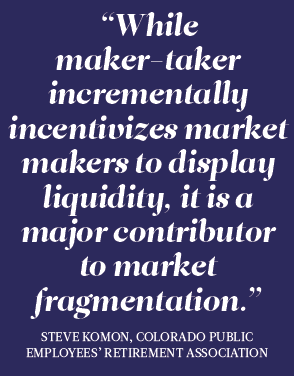 “While this marketplace appears efficient in some ways, with tighter spreads used as an example, the resultant system is overly complicated. The maker-taker pricing model is one key feature of the equity market evolution that has contributed to this complexity and fragmentation.”

“For an institutional investor like Colorado PERA, the maker-taker model affects the routing of our orders by the brokers with which we interact,” Komon told Markets Media. “A conflict of interest can arise between achieving best execution for the client and capturing financial incentives for the broker. In addition, the fragmentation resulting from maker-taker, as well as other market developments, requires more algorithmic firepower to achieve best execution.”

Maker-taker was first introduced in the equity market in 1997 by Island ECN, a pioneering electronic communication network that was later acquired by Instinet.

The idea was to give liquidity providers more incentive to trade in markets with tight bid-ask spreads. Maker-taker later moved to the options market. The pricing model has come under increased scrutiny in recent years amid a broader push to make equity markets more simple, fair and transparent.

Senator Charles Schumer (D-NY) called for makertaker reform in 2012; since then, influential market players such as IntercontinentalExchange Chief Executive Officer Jeff Sprecher, KCG CEO Daniel Coleman, and Headlands Technologies co-CEO Matt Andresen have spoken out on the need for reassessment.

Andresen’s assertion was perhaps the most notable, as he was the CEO of Island ECN between 1997 and 2002.

“The reasons we came out with maker-taker pricing do no longer exist,” Andresen said in a July 2014 roundtable discussion hosted by a congressional financial-services subcommittee. When the idea arose in 1997, back when Bill Clinton was U.S. President, there were no immediately accessible electronic prices.

The primary purpose of capital markets is to facilitate capital raising by connecting corporations with institutional investors. Critics say maker-taker is an example of how market structure has strayed off course with its complexity, which often ends up benefiting market intermediaries at the expense of end users.

“The quantitative and technological arms race that has emerged in response to the complex market system is unduly burdensome on long-term investors, and a move to simplify equity markets is in order,” Komon said.

“While maker-taker incrementally incentivizes market makers to display liquidity, it is a major contributor to market fragmentation. A test of the cost/benefit proposition of liquidity versus complexity and reduced transparency would allow market participants to better understand this tradeoff and ascertain the best course of action to improve the system.”

Such a test is in the offing. On August 2, U.S. Securities and Exchange Commission Chair Mary Jo White said market regulators were moving forward with a pilot program that would test exchange trading without the rebates paid to attract orders from high-frequency traders and other high-volume brokers.

The proposed pilot, worked up by the SEC Equity Market Structure Advisory Committee, will have four buckets of random securities. The control group will be status quo, i.e. an access fee cap of 30 mil, or $0.003 per share; the other buckets will be 20 mil, 10 mil, and 2 mil, with the latter bucket meant to represent no economic significance. Bid-ask spreads will be compared across buckets.

Some details still need to be worked out, and the timing remains a ways off, as the SEC still needs to formally propose a pilot, solicit public comments, and propose a final rule, before moving on to implementation.

But the pilot initiative is a good one, according to some market participants and observers. 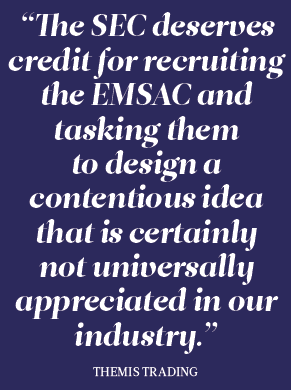 “We are excited to see this bold undertaking, and think it is past due,” Themis Trading wrote in a blog post in April. “The SEC deserves credit for recruiting the EMSAC and tasking them to design a contentious idea that is certainly not universally appreciated in our industry.”

“(Invesco Global head of Trading and EMSAC member) Kevin Cronin is the appropriate leader and investor advocate” to steer the pilot, Themis continued. “Those who know him find him always reasonable, always direct – cutting to the meat on any issue, and a passionate leader. If a pilot can be designed, so that it actually gets off the ground, Cronin is the man in the arena to get it done.”

Attention and debate on maker-taker pricing over the past four or so years has focused on its implications for market structure, broker routing practices, and investor interests.

Those in favor of maker-taker have argued that the model is an important competitive tool for exchanges, and directly or indirectly can provide better prices for retail investors.

The con side rests on the belief that maker-taker exacerbates conflicts of interest between brokers and their customers, where the broker will first try to route an order to the exchange or venue that pays the largest rebate – not necessarily the one with the best actual price.

This might contribute to market fragmentation and market complexity through the proliferation of new exchange order types, and undermine price transparency.

When maker-taker originated about two decades ago, electronic trading venues were in their infancy as alternatives to registered exchanges and their human floor brokers. Previously, trades were handled manually and commissions were set on the floor at the broker’s discretion.

When Island ECN first deployed maker-taker, the idea was to dangle liquidity-making rebates to brokers to lure order flow away from the incumbents, NYSE and Nasdaq. The pricing scheme, when coupled with the speed and efficiency of electronic technology, helped traders not only generate income, but also ‘democratize’ electronic trading. This is turn, helped Island develop and deepen more trading relationships and establish the venue as a leading-edge provider of cheaper liquidity.

Island was a big deal.

Joshua Levine, its creator, was named one of the top 10 financial innovators of the 1990s by an industry publication, which said “if there’s a single person that revolutionized the equity markets in the 1990s, it’s Joshua Levine.”

Fast forward 20 years to today when the utility of maker-taker is getting a fresh look.

Andrew Upward, head of market structure at Weeden & Co., said he didn’t think a maker-taker pilot will do much harm, and it could potentially generate useful data. But he didn’t offer a ringing endorsement. 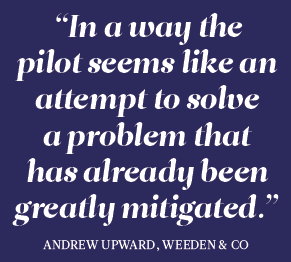 “If forced to say whether we’re in favor of it or against it, we’d say we’re in favor of it,” Upward said. “If that doesn’t seem like enthusiastic support, it’s mainly because we think that most market participants have found ways to cope with the existing complexity, so in a way the pilot seems like an attempt to solve a problem that has already been greatly mitigated.”

Ideally, he’d like to see the rules around maker-taker examined in tandem with an examination of tick sizes, since the two issues are closely intertwined. But the access fee pilot program on its own can generate data that sheds light on how fees and rebates impact the market.

“It’s less clear what the outcome will be for institutional investors and agency brokers,” he said. David Weisberger, managing director and head of trading at Markit, said the effects of the pilot will depend on just how far-reaching the program is, taking into account the stocks that are included and the duration of the program.

“It depends on the scope of the pilot, but it could have a large impact since it will likely target the most liquid securities,” Weisberger said.

With regard to the specific effects, “liquidity takers will see explicit fees go down in many cases, but could end up paying wider spreads on average,” Weisberger said. “This, if commission rates are not adjusted downward, could represent a revenue transfer from asset managers to their brokers, since the brokers are net takers of liquidity on their behalf and currently absorb the access fees in most cases.”

Smaller liquidity takers in the most actively traded names, he added, will see liquidity fees go up since they often transact in inverted venues that pay to take liquidity.

While the proposed pilot program should help regulators and market participants better understand maker-taker and its implications, Weisberger has some reservation.

He said that any pilot program would be of more value if there are rules that accompany the pilot to facilitate measurement of all routing activity.

“The benefit of the pilot that is emphasized by proponents is that it could reduce both distortions and conflicts of interest in routing, but the current routing disclosures are woefully inadequate to measure that,” Weisberger said. “What is needed is a new Rule 606, with absolutely no exemptions, that also requires aggregated execution quality stats on comparable order types and a new Rule 605 which eliminates exemptions that also requires that all order types offered by market centers be measured separately.”

If the pilot program is effective, “presumably you should see fee schedules become less complicated and a lot more pointed toward the purpose they were intended for, which is to be an incentive to provide liquidity,” said Eric Noll, chief executive officer of agency brokerage and trading-technology provider Convergex.

“I don’t think maker-taker goes away, but in the context of the access-fee pilot, I think it starts to become less important in terms of liquidity provisioning and for routing.”