SOME MAJOR TRENDS IN the options market have been the same for a number of years.

A bifurcation of liquidity.

But at least one noteworthy development is of a more recent vintage:

Options auctions are typically called ‘price-improvement’ auctions, which denotes a benignancy that every market participant and operator would support.

But in reality, these exchange offerings are a point of significant contention, as while an auction may benefit those involved in that specific transaction, it is potentially harmful to overall market quality.

The issue is that auctions take place on the sidelines of the market, so the bids and offers don’t make it into the aggregate pools. This can impair displayed liquidity, widen bid-ask spreads, and discourage trading activity.

Options exchange operators face a delicate balancing act when it comes to auctions.

Exchanges are in the business of matching trades based on displayed liquidity, and their executives stridently defend the sanctity of lit quotes, at least in public remarks. But as for-profit entities in a very crowded space, they need to seize competitive advantages, so if there’s an opportunity to grab a percentage point of market share via auction functionality, they have to take it — or rivals will. 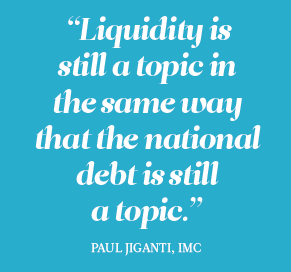 Auctions wouldn’t be an issue if it were a matter of just a few stray trades here and there, but auction volumes have increased to material levels — more than 10% of overall industry volume, including a disproportionate amount of retail order flow, according to industry estimates.

So the area needs attention.

“There are many factors that have negatively impacted market makers’ ability to quote and compete in today’s market, but today the one that is most impactful and can be easily addressed is auction mechanisms,” said Paul Jiganti, managing director for options business development at IMC Financial Markets in Chicago. “I am concerned about an oversized reliance on auctions diminishing the incentive for market makers to populate the screens with aggressive quotes,” Jiganti told Markets Media.

“With some relatively small tweaks we can begin to reverse that trend and have more competitive and meaningful quotes on our options screens.”

Options auctions are still in the pilot-program phase; the U.S. Securities and Exchange Commission is soliciting industry feedback regarding their pros and cons.

Jiganti suggests tweaking existing mechanisms by only starting auctions with price improvement and not on the quote; restricting the differential between the initiator and responder for the auction; and requiring or encouraging, through allocation rules, greater participation for entities on the quote at the time of the auction request.

After boom years in the late 2000s and early 2010s, overall trading hasn’t met the hopes of growth-minded market operators and participants.

But aggregate activity has held up reasonably.

For the first seven months of 2016, average daily options volume was 16.3 million contracts according to OCC, up a modest 2% from the year-earlier period.

“You’ve seen a plateauing function with a finite universe of volume,” said Ivan Brown, head of options at NYSE Group, which operates the Amex and Arca exchanges. “Despite that, you continue to see an expanding number of exchanges and series and products traded, which fragments that finite universe a bit more.”

“There are benefits from that, in the form of increased competition,” Brown told Markets Media. “At the same time, it can result in complexity and increased costs from a technology perspective.”

ISE Mercury launched in February as the 14th U.S. options exchange, and Miami International Holdings has said it plans to launch its second options exchange in the third quarter of 2016, which would be No. 15. That’s more than double the 2010 field size of seven exchanges. The venue expansion started amid buoyant times in the options space; some years saw volume growth in the order of 20%.

More recently, the capacity creep has continued mostly as a function of exchange operators seeking to grab a bit of market share via a slightly differentiated business model.

But even the most bullish options advocates agree that 15 exchanges are too many.

In a sign consolidation may be in the offing before too long, three options exchanges — Nasdaq’s Mercury and BX venues, plus Bats Global Markets’ EDGX — had market shares of less than 1% in July.

The ongoing marketplace fragmentation, plus the emergence of auctions, is making life difficult for market makers, the constituency that’s considered the lifeblood of the options market.

“When evaluating the evolution of the displayed markets, you have to consider that as a market maker with a finite level of capital to quote across 14 or 15 exchanges, at some point you have to either quote less or quote wider,” Brown said.

In the largest options-exchange M&A transaction in some time, Nasdaq bought International Securities Exchange in June from German exchange and clearing house operator Deutsche Boerse in June. With the purchase, Nasdaq added ISE’s eponymous equity options exchange, along with its more recently launched Gemini and Mercury, to its own three exchanges. ISE was a pioneer in electronic options trading, dating back to the late 1990s. 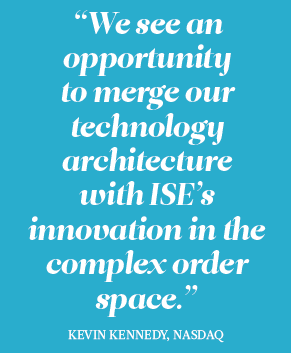 The Nasdaq-ISE deal can be viewed as a glass half-full or glass half-empty statement on the industry. Half-full would be that Nasdaq, a shrewd operator with decades of success in equities, sees long-term value in the options space.

Half-empty would be that the $1.1 billion price tag was less than half the $2.8 billion Deutsche Boerse paid for ISE in 2007, reflecting a more muted outlook for the business. Nasdaq’s view is glass half-full.

“From our CEO to our technology and sales team, and everyone in between, we are excited about this acquisition,” said Kevin Kennedy, head of U.S. options at Nasdaq. “The deal itself is our vote of confidence in the options markets.”

“The options market is an integral part of the U.S. financial infrastructure and markets,” Kennedy told Markets Media. “We have a responsibility to provide fair and equal access to all participants. In the ISE deal we see an opportunity to merge our technology architecture with ISE’s innovation in the complex order space. ISE’s functionality and Nasdaq’s technology will be a great marriage that we believe will benefit customers and the overall marketplace.”

Along with the three exchange medallions, the ISE purchase gives Nasdaq front-end order and execution management system PreciSE Trade, as well as an additional 20% stake in OCC, which doubles Nasdaq’s ownership in the largest equity derivatives clearing business.

“All of those assets make strategic sense for Nasdaq,” said Andy Nybo, global head of research and consulting at Tabb Group. “In terms of the purchase price, when Deutsche Boerse bought ISE, it was a very different market environment. Growth was exponential during that period, therefore the valuation of ISE was much higher.”

“One other component of the transaction that is worth mentioning is the complex order book that ISE developed, which remains the market leader in terms of percentage of total volume,” Nybo added. “North of 50-60% of ISE volume on any given day is a result of multi-legged complex order transactions, which has been the fastest-growing segment of the market over the past couple years.”

And most say outside of perhaps a few dozen ultra-liquid names, bid-ask spreads are too wide and quotes aren’t deep enough.

Five years ago, half of all options order flow was in the top 70 names; today, half of the market’s order flow is in only about the top dozen names, according to industry estimates.

“It’s really pushing to the most liquid,” Jiganti said. Liquidity shortfalls, fragmentation, and too many strike prices are key issues, noted Kennedy of Nasdaq. “While they are easy topics to discuss, they have thus far proven difficult to remedy,” he said.

“The primary challenge is indeed increase access to liquidity for all participants,” Kennedy said. “We are in constant contact with customers to enhance their workflows and trading…Exchange operators must do their part by continually providing the facilities and platforms so market makers can transfer risk to one to another in an open, fair, and transparent environment.”

Exchange operators and technology providers are motivated to solve the liquidity puzzle, as great gains will come to any firm that develops a true game changer.

Meanwhile, exchanges keep busy enhancing systems and developing products that can at least incrementally improve the trading experience of their customers. Kennedy views fragmentation as an opportunity for a tech-savvy exchange operator that can create and operate the purest matching engine, maximize determinism rates and throughput, and minimize latency.

“When done properly, reaching these goals provides the market with risk controls that provide a safety net for market makers and help all participants to manage risk,” he said.

NYSE enhances displayed liquidity via incentives for options market makers, according to Brown. 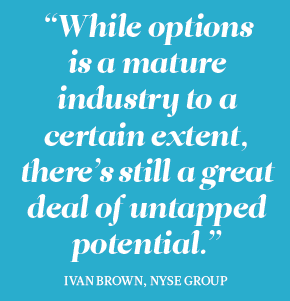 “On both Amex and Arca we tie a lot of incentives towards displayed liquidity, which is part of encouraging size markets,” Brown said. Another theme is risk controls in the options space. We’re focused on that at Amex and Arca to the extent that we’re offering risk controls that give market makers confidence to put capital out at risk. That contributes to a safer operating environment for them and also greater display and tighter markets.”

Making options market more liquid would encourage more trading, which in turn would help address the big-picture issue of overall growth having taken a leave of absence in recent years.

Another aspect to this is attracting new users.

“While options is a mature industry to a certain extent, there’s still a great deal of untapped potential in terms of user base,” Brown said. “This is both from pension funds that haven’t historically used the options product, as well as increased retail engagement. Over the past year or two we have seen more technology-informed retail participants in the form of robo-advisors that are encouraging greater savings and investment in the market. That may create opportunities in other asset classes like options.”

Nybo of Tabb noted that although growth has been hard to come by, aggregate volumes aren’t far off from the record levels reached in the early 2010s.

“U.S. option markets are extremely healthy,” he said. “We continue to see very robust volumes, be it with slower growth than in the heyday.”

“We’re seeing a lot of embrace by retail and by institutions, and really the markets remain very healthy,” he continued. “I fully expect to see more embracement of risk management tools like options over the coming years. There’s a huge community out there that has not really realized the benefits of risk management tools like options. I expect organic growth to come from institutions like pension funds, and insurance companies, and there will be a younger generation of investors coming into the marketplace.”