VENUE OPERATORS FACE SCRUTINY INTO HOW THEY CONDUCT BUSINESS

SO-CALLED DARK POOLS are getting less dark. Well, sort of.

The U.S. Securities and Exchange Commission is forging ahead with new regulations on alternative trading systems, of which dark pools is a prominent subset, by requiring dark-pool operators to reveal more about how they do business. Disclosures would include information regarding trading by the broker-dealer operator and its affiliates on the ATS, the types of orders and market data used, and execution and priority procedures.

But as the SEC’s proposed amendments to Regulation ATS shine light at the operator level, of critical 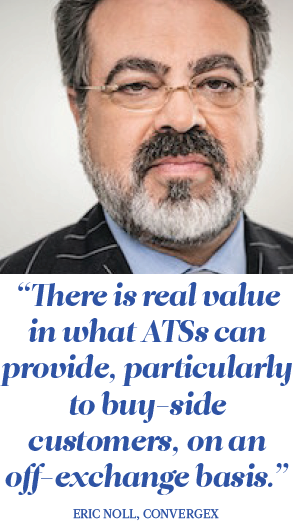 importance is that the actual trade matching that is done in a dark pool is being left alone. So the raison d’être of dark pools — enabling institutional investors to buy and sell large blocks of stock efficiently, without broadcasting their intent to the world — remains intact.
“The future of dark pools is a vibrant one,” said Eric Noll, chief executive officer at Convergex, an agency-focused brokerage and trading-services provider. “There is real value in what ATSs can provide, particularly to buy-side customers, on an off-exchange basis.”

Regulators are essentially opening the doors to the pool office and replacing the frosted windows with clear panes. The pool stays open. The idea is that the additional transparency required will raise the bar on management, which will ultimately make for cleaner water and an improved swimming experience.

There are more than 40 active ATSs registered with the SEC, which combined match a bit less than 20% of U.S. stock trading, according to industry estimates. The largest dark pools include Credit Suisse Crossfinder, UBS ATS, Deutsche Bank’s SuperX, Morgan Stanley’s MS Pool, and Bank of America Merrill Lynch’s Instinct X.

Aside from block trading with minimal information leakage, other benefits ATSs offer vis-a-vis exchanges can include attractive fee structures, price improvement, and faster process speeds. Historically just a small corner and curiosity of the market, dark pools emerged in a significant way after Regulation National Market System opened up the trading-venue business for competition in 2005, and market participants say they’re here to stay.

But dark pools have been in more than their fair share of negative headlines recently — and the names behind the headlines are a veritable who’s who of the industry, rather than a few fringe operators.

Earlier this year, Barclays and Credit Suisse settled separate cases in which regulators alleged misrepresentation and inadequate disclosure in their dark pools. Last year, ITG paid a record dark-pool fine and admitted wrongdoing over allegations that it misused confidential information in 2010 and 2011.

Earlier in 2015, UBS was fined for not following certain rules pertaining to trading fairness during the 2008-2012 period. Goldman Sachs paid a smaller fine in 2014 for trade mispricings in 2011. Broadly speaking, the operators’ missteps haven’t hurt business, as dark-pool activity is robust — some year-over-year gains in trading volume are reported in the vicinity of 20% on a quarterly basis. But regulators have seen enough.

The SEC’s proposal calls for ATSs to file detailed disclosures on the newly proposed Form ATS-N, which would then be posted on www.SEC. gov for the benefit of all market participants who may be considering whether to do business with an ATS, or who want more information on the ATSs they are using. The regulatory thrust is about empowering ATS users. They can still trade in the dark, but they can’t be in the dark about their dark trading.

“Control and transparency are the driving forces behind much of the change we see and will continue to see,” said Vlad Khandros, global head of market structure & liquidity strategy at UBS. “Regulatory initiatives such as the SEC’s recently proposed Regulation ATS-N and proposed enhancement to order-handling disclosures each aim to provide clients with more information in order to make better informed decisions around their order routing.”

In July 2016, the SEC proposed rules that would, for the first time, require broker-dealers to disclose the handling of institutional orders to customers. The proposed rules also would expand the information included in retail order disclosures. On the institutional side, the SEC wants to mandate broker-dealers to, upon request, provide customers with a report on their handling of any order of at least $200,000.

For retail, broker-dealers would provide information regarding payments received from execution venues, a controversial practice known as payment for order flow.

In a broad sense, the regulatory activity regarding dark-pool operations and order disclosure has its roots in the global financial crisis of 2008-2009. Institutional portfolios dropped 20% to 30% or more; beyond the macro swoon, some managers were caught off-guard by information gaps around derivative positions and liquidity levels. And the Bernie Madoff scandal shook the industry.

Markets have recovered, but the buy side was scarred by the episode, and their ardor for more information about their counterparties, trade handlers and order destinations continues unabated.

“Asset managers are asking more questions than ever before around the ATS topic, whether around new 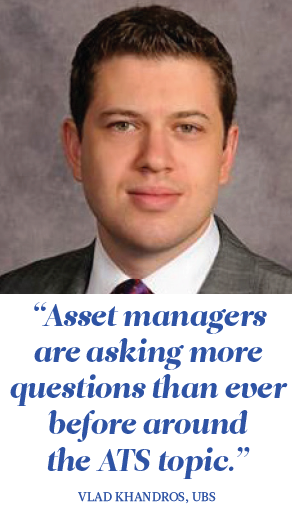 functionality, the environment as a whole, or regulatory initiatives like ATS-N,” Khandros told Markets Media.

More information from regulatory spigots such as ATS-N and order-handling disclosures would be helpful, but there is such a thing as too much information. For resource-constrained buy-side firms, this is a real concern. The new proposals are “good for clients in the sense that they will have more information, but it will also mean that their jobs will get tougher because they will be expected to process and act on this information,” Khandros said.

“The result is that the obligations on the buy side are only growing.” Another major regulatory change is Regulation Systems Compliance and Integrity, which went into effect in November 2015 and applies to exchanges and the largest ATSs, according to Khandros.

“That was a significant requirement,” he said. “It’s where the SEC has focused on topics such as disaster recovery, business continuity, and cybersecurity.”

In a February 2016 comment letter to the SEC, the Security Traders Association said it agreed with the broad aim of the regulators’ push, i.e. that more transparency into dark pools’ operations would benefit a range of market participants. But the STA took issue with some details of the proposed amendments to Reg ATS. Specifically, the STA believes that the format and frequency of asking open-ended questions on Form ATS-N leaves room for interpretation which will make it difficult to compare responses and lead to over-reporting by ATS operators.

“Reg ATS was for the purpose of corralling these off-exchange venues, and the rules were very benign,” said Jay Biancamano, head of equities product marketing for the Americas at trading- technology provider Fidessa. “It was really just a matter of a reporting rule, where you had to say who you were and how you operated your dark pool. Any time you changed stuff, you sent an update.”

The creation of Form ATS-N moves dark-pool rules closer to those on the books for exchanges. “Regulators are being more stringent about how you run your dark pool,” Biancamano said. “What that’s going to do initially is eliminate a lot of ATSs, because the cost of running it plus the regulatory burden makes it just not worth it.”

Scale has always been important for trading venues, and the new ruleset will prioritize scale for dark pools even more, which should give a lift to large players with the deepest liquidity. As far as the competitive dynamic between exchanges and dark pools, the first inclination is to conclude that a more stringent Reg ATS will benefit the former group, but that’s not necessarily the case.

“When you remove liquidity from dark pools, it doesn’t automatically go into the lit pools,” Biancamano said. “That’s what’s intended, but it’s not going to just happen. Latent liquidity does not automatically just move from one venue to another. It gets pulled out becomes latent again.”

SEC filings on dark pool regulations are voluminous, but market observers say it can be boiled down to two words: disclosure and transparency.

“(Dark pool) volumes keep going up, and now Congress wants to regulate and keep an eye on electronic trading,” said Richard Levin, attorney at Bryan Cave, explaining the current regulatory environment. “If you don’t disclose, you’ll get sanctioned. We tell all our clients to over-disclose.”

Levin’s clients include some of Wall Street’s biggest brokers, who operate some of the largest dark pools. Chris Nagy, who runs the Healthy Markets Association and KOR Trading, said that the SEC often finds itself playing catch-up, and the regulator is intent on passing some sort of dark pool regulation given the incidents of recent years.

“They are looking for any types of conflict of interest,” Nagy said. “Specifically, they want to see what kind of information leakage goes on. There has been a big lack of disclosure.”

About 35% of market participants avoid certain dark pools due to the risk of exposure to ‘toxic’ order flow, up from 23% two years ago, according to a Greenwich survey. In terms of ATSs that traders avoid, bulgebracket venues were identified 41% of the time, compared with all other ATSs at 30%.

Beyond the headlines, the buy side has taken steps to be more proactive in tracking the quality of liquidity they receive, and darkpool operators are sharing more information about their ATSs and offering better controls to the buy side to help alleviate concerns.

“ATS owners understand that although the nature of trading offexchange is structured purposefully to minimize information leakage about their trades, the will lose order flow if they don’t improve traders’ comfort levels with the trading venue,” Colon said.

Opinions vary as to the future of dark pools, but one consensus conclusion is that the venues will look different than it does today.

“They are in the process of an evolution,” said Noll of Convergex. “They’re going to become a lot more transparent about how they operate, what they do, and how they match orders. Even if the client names aren’t disclosed, we’ll know what kind of participants are in those ATSs, what order types they use, all of those kinds of things.”

“This is driven both by overall regulation but also from the buy side, with the push being, ‘How am I getting better execution by executing in that ATS?’,” Noll continued. “The old way of how ATSs worked will evolve. Some ATSs may not make the transition effectively, but those that do will continue to evolve in a way that’s more and more best-execution friendly, buy-side-friendly, and liquidity-friendly.”