HIGH-FREQUENCY trading has served as sort of a catchall, market bogeyman phrase for about the past half-dozen years, or about as long as the methodology has been in the awareness of the general public.

And of course there was Flash Boys, the highly publicized Michael Lewis book, in which the author’s main conclusion was that the markets were rigged, and HFTs are the ones doing the rigging. 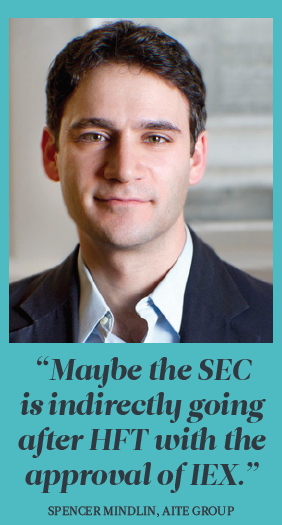 “It’s always going to be something that people throw under the bus whenever there’s any kind of disruption, whether it’s market manipulation, outages, crashes, or anything else,” said Spencer Mindlin, analyst at consultancy Aite Group.

But high-frequency trading has existed for at least 17 years now, and it has comprised a meaningful portion of U.S. equity trading volume for more than a decade. The U.S. Securities and Exchange Commission has looked at HFT for years, and not only has the regulator generally let it be, but its own economist has cited benefits of HFT.

So while high-frequency trades might have ultra-short holding periods, high-frequency trading has staying power. For high-frequency traders, no news is good news, as a dimming of the once-white-hot spotlight allows for more opportunity for market participants and observers to understand HFT’s beneficial role in the market. At least that’s according to HFT advocates.

“We’ve witnessed an education of the marketplace, helped by academic studies and research, which in turn has led to a better understanding of the HFTs and the strategies that they employ,” said Doug Cifu, chief executive officer of Virtu Financial.

“A few years ago, HFT was the industry’s favorite scapegoat for things that the market participants didn’t understand. Fast-forward to today, instead of pointing to HFT, the buy side is more advanced and capable of analyzing the executions they receive and the manner in which their orders are routed.”

“The more sophisticated buy-side participants are able to look at the data and ask meaningful questions of their algo providers,” Cifu told Markets Media. “Thankfully, data and transparency have squelched the rhetoric.”

High-frequency trading has been a lightning rod for years, with strident backers, vocal detractors, and lots of gray area. The gray area starts with the definition.

But there is no single definition of HFT, and asking 10 different market participants for their definition would likely produce 10 different answers. Some research has shown that HFT is helpful to the market overall.

In 2014, Austin Gerig of the SEC published a paper noting that speculative traders using low-latency strategies deepen market liquidity, and automated traders are able to price securities better and more efficiently than their human counterparts. Other research has concluded HFT is harmful.

Its practitioners are in the business to make money, and because the market is a zero-sum game, other market participants lose money due to HFT. Many HFT transactions nick a little bit off institutional trades, which add up and materially reduce the net return of end-user investors, say HFT detractors.

Financial markets need intermediaries to set prices and manage imbalances. In stocks, this market-making role historically was filled by the specialist, or broker, on the exchange floor. When liquidity or price discovery in a security was limited, the floor broker stepped in and was the offer to the bid and vice versa, and when needed, the person would trade against a natural order. But floor brokers became an endangered species with the rise of electronic trading as decimalization took hold and spreads narrowed.

In 2008, the New York Stock Exchange introduced the Designated Market Maker role. DMMs operate manually and electronically to facilitate price discovery, and they also have obligations to maintain fair and orderly markets in their assigned securities. Virtu is one of four DMMs on the NYSE, along with GTS, IMC Financial, and KCG.

When Barclays relinquished DMM status by selling its business to GTS in January, it was the last of the brandname investment banks to exit that capacity. Floor trading represents an important — but diminished — part of the market ecosystem, as only an estimated one-eighth of stock trading transacts on the floor.

The lion’s share of a DMM’s business is conducted electronically, and high-frequency trading is a big part of that.

HFT practitioners operate at hyper-fast speeds, underpinned by the latest hardware, software, and transmission technology. They are arguably the most cost-effective financial intermediary that ever existed. Spreads contracted as a result of these trading efficiencies, lowering trading costs — or at least explicit trading costs — for all.

One nuance is that while HFT is perceived as a new phenomenon, the underlying business model of providing liquidity for as many trades as possible, for the purposes of generating revenue, is not new.

“HFT has been present in the markets in some way, shape or form for a long time, and it’s unfair to lump all of the members of the HFT community together,” said Peter Maragos, chief financial officer of agency broker Dash Financial. “Technology companies that have evolved into today’s liquidity providers should not be vilified, as they are essential to providing liquidity to both institutional and retail investment communities in a post Dodd- Frank world.” 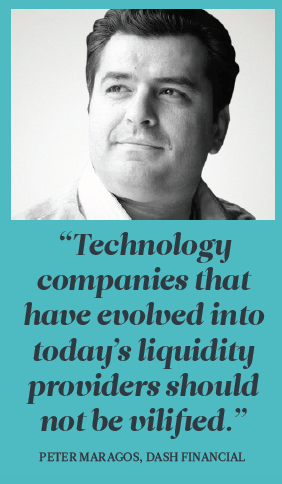 Maragos added that if a firm exists simply to prey on and manipulate other market participants, they should be judiciously policed and scrutinized as regulators have always done.

“The larger issue, however, is that we need to create a simpler market structure for all investors, whether short- or long-term, which in our view would go a long way towards reducing many of today’s perceived issues,” Maragos said.

Opinions about high-frequency trading vary widely. But one fact is that the salad days for the methodology are over. HFT makes up about 48-50% of U.S. equity trading, according to Aite Group. That’s down from 60-65% in 2009, back when the field was less crowded and trading profits were easier to come by.

Nobody expects the SEC to attempt to ban high-frequency trading, and while the idea of a transaction tax on high-speed trades recently has been discussed in some political circles, it’s considered a longshot.

“I don’t think the SEC is directly going after HFT,” said Aite’s Mindlin. “There are benefits to it, and also it’s very controversial of how do you define HFT, especially HFT versus market making and liquidity provisioning. So they’re treading lightly.”

Aside from definitional ambiguity, the SEC is wary of unintended consequences, which in the case of an HFT crackdown most likely would manifest itself in the form of diminished market activity. “If they start slowing down or putting the reins around HFT, who’s going to come back in to provide liquidity?” Mindlin asked.

Rather, the SEC’s approach seems to be an indirect one, cleaning up around the edges of HFT, and leaving it to market forces to determine the future of HFT. In April 2016, the SEC approved a rule proposed by the Financial Industry Regulatory Authority that would require algorithmic trading developers to register as securities traders, a move aimed at reducing market manipulation.

And then there’s Regulation Systems Compliance and Integrity, which the SEC adopted in December 2015 as a way to monitor the security and capabilities of exchanges and alternative trading systems.

“Reg SCI to some degree puts market centers on notice that they better know and be able to control the technology and the participants that are leveraging the technology in their marketplace,” Mindlin said. “They need to be able to know what’s going on. I’m bracing myself for when the first enforcement action comes against violations of Reg SCI.”

IEX, which went live as an exchange on August 19, can potentially damp high-frequency trading as a market factor, if its built-in processing delay of 350 microseconds attracts enough order flow. “Maybe the SEC is indirectly going after HFT with the approval of IEX and its speed bump,” Mindlin said.