BUT WILL NEW TECHNOLOGIES COMPLICATE THE MIGRATION?

AS THE EQUITIES, equities options, and fixed-income markets reach the midpoint of their journey to a T+2 settlement window, some within the industry wonder if the migration plan should include disruptive technologies like distributed ledgers.

The Depository Trust & Clearing Corp.(DTCC) has fielded such queries from buy- and sell-side clients, according to Murray Pozmanter, managing director and head of clearing agency services at the DTCC.

“A few companies have been talking about T+0 and T+1 settlement capabilities and I know that it has resulted in conversations with our customers,” he added.

If the industry follows its existing multi-year migration plan, which was developed using industry consensus, it should be ready for the T+2’s go-live date of September 5, 2017.

“We don’t envision any hiccups with going forward with the current target,” said Pozmanter. “The whole process seems to be moving along well. All the various industry participants are engaged, the regulators are engaged, and we don’t see any problem with the September date being in place.”

Although distributed ledgers may dominate clearing and settlement conversations, migrating from a T+3 to a T+2 settlement window isn’t a true technology challenge for the industry, according to industry watchers.

“The existing technology can certainly go to T+2,” noted Terry Roche, principal and head of fintech research at industry analysis firm Tabb Group. “It’s not a technological problem and hasn’t been a technology problem for quite some time.” 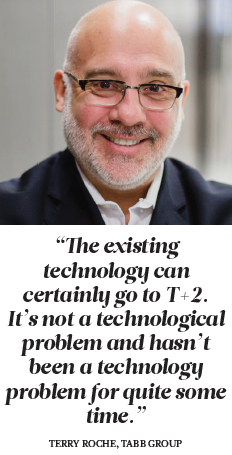 “I think that most market participants have found the actual technological lift to go from T+3 to T+2 to be quite minor since many of the tradeentry and comparison enhancements since we moved from T+5 to T+3 have been moving closer to a real-time basis,” agreed Pozmanter.

In fact, many industry members do not realize that achieving a shorter settlement windows, such as T+1 and T+0 are possible today using the technology already in place but with some limitations. It’s an option for DTCC sell-side clients who utilize the National Securities Clearing Corp. (NSCC), and institutional customers who use Omgeo can agree to settle on a T+1 or a T+0 basis, according to Pozmanter.

If the NSCC processes a trade through the standard course of business, Depository Trust Company settles that trade the next day as part of the NSCC obligation. On the other hand, if someone makes a cash trade before 11:30 a.m., the trade will make it into the DTCC’s Continuous Netting Settlement System for same day settlement.

“Some of the buy-side firms that we’ve heard from say that T+1 is as far as they would want go, but they have that capability today. If DTCC clients were interested in doing more T+0 trades or wanted to settle T+0 trades later in the day, beyond 11:30 am, that there’s no inherent limitation in doing that,” said Pozmanter.

“The systems were configured this way based on what the industry needs were at the time.”

Although distributed ledger technology will not play a role in the migration to T+2, the DTCC is far from discounting the new technology.

“There’s a growing viewpoint out there, that reconciliation is either going to be significantly truncated, if not completely removed, in a distributive ledger technology framework,” noted Tabb Group’s Roche.

The eventual adoption of distributed ledger technology in clearing and settlement boils down to simple economics, he added.

“The capital markets industry is burdened by significant cost pressures,” Roche said. “If the market does indeed adopt a distributive ledger architecture, that then the post-trade reconciliation settlement landscape would be able to cut its costs dramatically.”

Roche expects that the existing clearing companies will be the ones to bring such solutions to market since it “is the fastest way to get the network effect.”

However, this has not stopped market participants from developing their own clearing and settlement systems based on the new technology.

At press time, the Financial Times reported that UBS would work with BNY Mellon, Deutsche Bank, ICAP and Santander to launch a “utility settlement coin” by early 2018. This project joins similar projects in the works at Citi, Goldman Sachs, J.P. Morgan, and numerous vendors and private consortiums.

Firms that follow the industry-wide T+2 migration plans, such as Fidelity Investments, are finding the path relatively smooth.

“Because the discussions around T+2 began in 2014, it allowed us to prepare adequately,” said Mark Katzelnick COO of Fidelity Finance and Brokerage Operations’ operations and services group at Fidelity Investments and member of the Industry Steering Committee that is guiding the T+2 migration.

“So far, we haven’t encountered any unexpected hurdles.” The firm has added multiple work streams related to technology change, documentation, client behavior, and testing to its infrastructure as part of the migration and doesn’t plan to pass on any of the added cost to its customers.

“As a leading provider of clearing services, we feel that it is important for us to offer this to our clients,” Katzelnick added. He also stressed that shortening the settlement window would affect clients far more than from a technological perspective.

“The T+2 settlement cycle is more than just a date change,” Katzelnick explained. “We need to continue to think about data transparency, behavioral changes, and documentation. For example, we need to continue to providing data to our clients in a timely manner so that they can make informed decisions faster, with one day less in the settlement cycle.”

As a result, Fidelity Investments has taken the time to examine how it manages its post-execution processing, including booking as/ of trades, processing cancel/corrects, and transmitting late files that could affect the shortened settlement cycle.

“We’re also looking at documentation and making necessary language changes to replace any references to T+3,” he added. “We do a good job in these areas now, but we want to be even better when the shortened settlement cycle becomes the new standard.”

The T+2 migration is close to reaching its next milestone as market participants prepare to test their updated systems against the DTCC’s testing framework beginning February 13, 2017.

“So, firms are presumably doing whatever builds they need to do internally now and doing their own internal testing over the next couple of months,” said DTCC’s Pozmanter.

For a firm like Fidelity Investments, this means spending the fourth quarter engaging in internal end-to-end testing, according to Kaztelnick. “We’re currently developing testing scenarios following the life of a trade and we’re looking to include a few clients in our testing as well, he said.

“The good news is that clients should have no disruption from what they are doing today.”

When industry-wide testing begins, the DTCC will run bi-weekly tests that will start on the first business day of the week until September 5, 2017. The testing framework will include DTCC subsidiaries NSCC, DTC, and Omgeo as well as Bats Global Markets, Nasdaq, and the Options Clearing Corp.