Earnest and Mr. Smith aren’t the only ones going to Washington.

As the leaves begin to fall from the trees, the Security Traders Association gets ready to host its 85th Annual Market Structure Conference – Shaping the Future – for the trading industry. The event will again be held at the JW Marriott in Washington D.C. from October 3 – 5. The event will feature the usual bevy of panels and speakers with Tim Hockey, President and CEO of TD Ameritrade, as the lead speaker.

The whole event schedule can be found here     https://sta-2018conference.topi.com/#agenda

Jim Toes, President and CEO of STA, sat down with Traders Magazine and highlighted that this year’s event kicks off with the STA Women in Finance Symposium, sponsored by Thomson Reuters. The day continues with Robert Cook, President and CEO of FINRA and Congressman Bill Huizenga rounding out the day’s featured speakers. 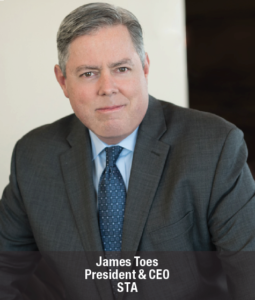 Thursday is a full slate of panels, Toes said, with a broad range of topics being covered such as exchange-traded funds, cryptocurrencies, the Consolidated Audit Trail and listed options. The day also features a one-on-one interview between Brett Redfearn, Director of Trading and Markets US Securities & Exchange Commission with Joe Mecane, Citadel Securities.

“Our industry is always impacted by regulations and technology,” Toes began, pointing to this year’s agenda. “You’d be hard pressed to find a time when these influences haven’t been more impactful than now. There will be a lot of discussion about the unwinding of old regulations as well as new regs coming on.”

Also, Toes expected open and active conversations surrounding Big Data, blockchain and how MiFID II, which has been in effect overseas since January is making inroads into the North American market structure and how it impacts both larger firms and smaller ones. Not be left out, ETFs and options merited their own discussion sessions given their unique status within the market. The former being  a relatively young market compared to cash equities but just as impactful and the latter which is looking hard at spreads, liquidity, market making dynamics and being included in the upcoming audit trail.

“I’m also very excited about the Thursday morning session where we start with Cboe’s Chris Concannon and Troy Paredes,” Toes said. “Their talk will be about standard fare such as the access fee pilot but will also give a much higher ‘top down’ view of the entire market. Then of course you have Brett Redfearn.”

Toes projected approximately 650 to 700 firms will be represented at this year’s event and 25% of all attendees being women. Also, he expected the buy-side to be the second largest attendee group ever this year forecasting 55 institutional firms coming. As usual, the brokers will constitute the lion’s share of conference goers.

“We want to provide best content, the best networking and of course best price to our constituents,” Toes said of this year’s program. “And we’re going to try and answer how will our industry change if things shift politically, as well as how audit trail is coming and firms need to be prepared and stimulate an open shared dialogue between the buy- and sell-side desks.”