The ‘Star’ of Welsh Breweries

For centuries, it was common for many brewers to brand their kegs with a star. This longstanding tradition is still seen today on some beer logos, including Seren Brewing Company. The company is a small brewery located on the edge of Pembrokeshire Coast National Park in West Wales. Following the old tradition, the owner Ali Kocho-Williams took “seren,” the Welsh word for star, and created his brewery based upon the tie between being a Welsh Brewery and keeping up with old traditions.

Ali is a Historian and Senior Lecturer (Associate Professor) at Aberystwyth University. He’s written several books on twentieth century Russian History (Russian and Soviet Diplomacy, 1900-1939; Russia’s International Relations in the Twentieth Century; The Twentieth Century Russia Reader) and has also published and given lectures on Soviet beer. It is no wonder that his knowledge of history would enlighten him on the star symbol and its connection with beer.

Being a beer lover, Ali began to homebrew in 2009. With his wife being a NY native, Ali had heavy exposure to the U.S. Craft Beer Scene, and quickly took an interest in brewing U.S. beer styles. In early 2011, Ali qualified to be a beer judge in the BJCP (Beer Judge Certification Program), and is now part of its board of directors as Northeast Representative. You will find him covering Northeast U.S., Canada and all non-U.S. and Canadian countries in the Northeast. 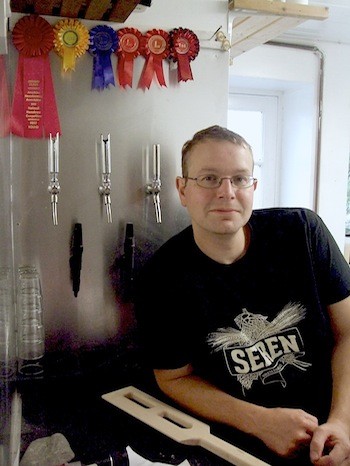 “Turning brewing professional seemed like something sensible, and was something I’d been thinking about for a while,” says Ali. With his knowledge of beer, as well as his experience with judging and homebrewing, it seems that he was more than qualified to start up a brewery.

Following a successful Kickstarter campaign, Seren Brewing Company started up in June 2013. The first batch brewed, Seren’s “session” IPA, a Bluestone IPA, won Beer of the Festival at the CAMRA Pembrokeshire Beer Festival. The winner is judged by festival-goers picking the beer they liked best. The IPA has since become a Seren best-seller.

Seren Brewing Company prides itself on being different from what is currently available on the local market in Wales. “Our beers tend to be hop-forward and full flavored, while the ‘traditional’ beers tend to be less exciting,” explains Ali. He’s realized that bringing new flavors into the market seem to be what customers want, and his brewery is quickly becoming very successful.

The brewery has expanded to reach Bristol and London, and this weekend was seen at one of the UK’s largest beer festivals in Nottingham. Ali has been exploring exporting his beer to Ireland and the U.S., as well as setting up sales via an online beer seller to reach across the UK and Europe.

Seren offers a range of seasonal beers, while the core beers are all US craft beer styles. Relating his beers to his studies on Soviet Beer, Ali has crafted many special historical beers, such as the NEP, Wager, Red October, and Taiga. Year round, he offers a variety of IPA’s, all creatively mixed and brewed to provide each craft beer lover with the perfect taste.

The brewery is small, holding just one Brewer’s Barrel at 36 Gallons. “But the UK Gallon is 20% larger than the US” Ali explains, “so this equates to about 41 US Gallons,” providing more beer with one barrel. Ali says that his brewery is pretty much a one man show, as he does all the brewing and packaging, with assistance from his wife in handling sales, enquiries and marketing. He credits a lot of his marketing and good feedback from his Kickstarter campaign. It’s important for Ali to keep his brewery on a small, manageable scale so he may “still have a ‘day’ job.”

All of the beer from Seren Brewing Company have received a lot of excellent feedback from both the public as well as industry professionals. The company has generated a following in the short time they’ve been open, and can appeal to customers both nationally and internationally.