The Physics of Wall Street: A Brief History of Predicting the Unpredictable

WARREN BUFFETT ISN’T the best money manager in the world. Neither is George Soros or Bill Gross. The world’s best money manager is a man you’ve probably never heard of — unless you’re a physicist, in which case you’d know his name immediately. Jim Simons is co-inventor of a brilliant piece of mathematics called the Chern-Simons 3-form, one of the most important parts of string theory. It’s abstract, even abstruse, stuff — some say too abstract and speculative — but it has turned Simons into a living legend. He’s the kind of scientist whose name is uttered in hushed tones in the physics departments of Harvard and Princeton. 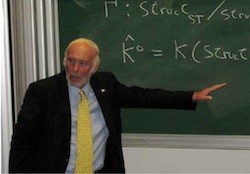 Jim Simons, founder of hedge fund Renaissance technologies AnD co- inventor of a brilliant piece of mathematics called the Chern-Simons 3-form, one of the most important parts of string theory

Simons cuts a professorial figure, with thin white hair and a scraggly beard. In his rare public appearances, he usually wears a rumpled shirt and sports jacket — a far cry from the crisp suits and ties worn by most elite traders. He rarely wears socks. His contributions to physics and mathematics are as theoretical as could be, with a focus on classifying the features of complex geometrical shapes. It’s hard to even call him a numbers guy — once you reach his level of abstraction, numbers, or anything else that resembles traditional mathematics, are a distant memory. He is not someone you would expect to find wading into the turbulent waters of hedge fund management.

And yet, there he is, the founder of the extraordinarily successful firm Renaissance Technologies. Simons created Renaissance’s signature fund in 1988, with another mathematician named James Ax. They called it Medallion, after the prestigious mathematics prizes that Ax and Simons had won in the sixties and seventies. Over the next decade, the fund earned an unparalleled 2,478.6% return, blowing every other hedge fund in the world out of the water. To give a sense of how extraordinary this is, George Soros’s Quantum Fund, the next most successful fund during this time, earned a mere 1,710.1% over the same period. Medallion’s success didn’t let up in the next decade, either — over the lifetime of the fund, Medallion’s returns have averaged almost 40% a year, after fees that are twice as high as the industry average. (Compare this to Berkshire Hathaway, which averaged a 20% return from when Buffett turned it into an investment firm in 1967 until 2010.) Today Simons is one of the wealthiest men in the world. According to the 2011 Forbes ranking, his net worth is $10.6 billion, a figure that puts Simons’s checking account in the same range as that of some high-powered investment firms. 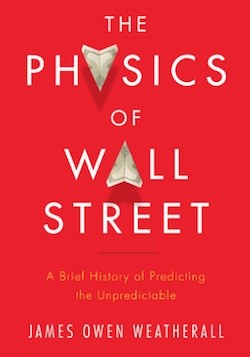 Renaissance employs about two hundred people, mostly at the company’s fortresslike headquarters in the Long Island town of East Setauket. A third of them have PhDs — not in finance, but rather, like Simons, in fields like physics, mathematics, and statistics. According to MIT mathematician Isadore Singer, Renaissance is the best physics and mathematics department in the world — which, say Simons and others, is why the firm has excelled. Indeed, Renaissance avoids hiring anyone with even the slightest whiff of Wall Street bona fides. PhDs in finance need not apply; nor should traders who got their start at traditional investment banks or even other hedge funds. The secret to Simons’s success has been steering clear of the financial experts. And rightly so. According to the financial experts, people like Simons shouldn’t exist. Theoretically speaking, he’s done the impossible. He’s predicted the unpredictable, and made a fortune doing it.

Hedge funds are supposed to work by creating counterbalanced portfolios. The simplest version of the idea is to buy one asset while simultaneously selling another asset as a kind of insurance policy. Often, one of these assets is what is known as a derivative. Derivatives are contracts based on some other kind of security, such as stocks, bonds, or commodities. For instance, one kind of derivative is called a futures contract. If you buy a futures contract on, say, grain, you are agreeing to buy the grain at some fixed future time, for a price that you settle on now. The value of a grain future depends on the value of grain — if the price of grain goes up, then the value of your grain futures should go up too, since the price of buying grain and holding it for a while should also go up. If grain prices drop, however, you may be stuck with a contract that commits you to paying more than the market price of grain when the futures contract expires. In many cases (though not all), there is no actual grain exchanged when the contract expires; instead, you simply exchange cash corresponding to the discrepancy between the price you agreed to pay and the current market price.

They came armed with formulas designed to tell them exactly how derivatives prices should be related to the securities on which the derivatives were based.

Derivatives have gotten a lot of attention recently, most of it negative. But they aren’t new. They have been around for at least four thousand years, as testified by clay tablets found in ancient Mesopotamia (modern-day Iraq) that recorded early futures contracts. The purpose of such contracts is simple: they reduce uncertainty. Suppose that Anum-pisha and Namran-sharur, two sons of Siniddianam, are Sumerian grain farmers. They are trying to decide whether they should plant their fields with barley, or perhaps grow wheat instead. Meanwhile, the priestess Iltani knows that she will require barley next autumn, but she also knows that barley prices can fluctuate unpredictably. On a hot tip from a local merchant, Anum-pisha and Namran-sharur approach Iltani and suggest that she buy a futures contract on their barley; they agree to sell Iltani a fixed amount of barley for a prenegotiated price, after the harvest. That way, Anum-pisha and Namran-sharur can confidently plant barley, since they have already found a buyer. Iltani, meanwhile, knows that she will be able to acquire sufficient amounts of barley at a fixed price. In this case, the derivative reduces to the seller’s risk of producing the goods in the first place, and at the same time, it shields the purchaser from unexpected variations in price. Of course, there’s always a risk that the sons of Siniddianam won’t be able to deliver — what if there is a drought or a blight? — in which case they would likely have to buy the grain from someone else and sell it to Iltani at the predetermined rate.

Hedge funds use derivatives in much the same way as ancient Mesopotamians. Buying stock and selling stock market futures is like planting barley and selling barley futures. The futures provide a kind of insurance against the stock losing value.

The hedge funds that came of age in the 2000s, however, did the sons of Siniddianam one better. These funds were run by traders, called quants, who represented a new kind of Wall Street elite. Many had PhDs in finance, with graduate training in state-of-the-art academic theories — never before a prerequisite for work on the Street. Others were outsiders, with backgrounds in fields like mathematics or physics. They came armed with formulas designed to tell them exactly how derivatives prices should be related to the securities on which the derivatives were based. They had some of the fastest, most sophisticated computer systems in the world programmed to solve these equations and to calculate how much risk the funds faced, so that they could keep their portfolios in perfect balance. The funds’ strategies were calibrated so that no matter what happened, they would eke out a small profit — with virtually no chance of significant loss. Or at least, that was how they were supposed to work.

But when markets opened on Monday, August 6, 2007, all hell broke loose.