A Toast To Bygone Days: The Mint Julep

This Saturday marks the 137th Kentucky Derby, the most prized and historic of horse races, and as “The Run of The Roses” kicks off at Churchill Downs, so too will its many traditions: the University of Louisville’s marching band playing “My Old Kentucky Home”, high society mingling with the merely wealthy on Millionaire’s Row, men and women in all of their finery (and elaborate, wide-brimmed hats), and, of course, that highly treasured and most widely exported of all the race’s traditions–the mint julep. 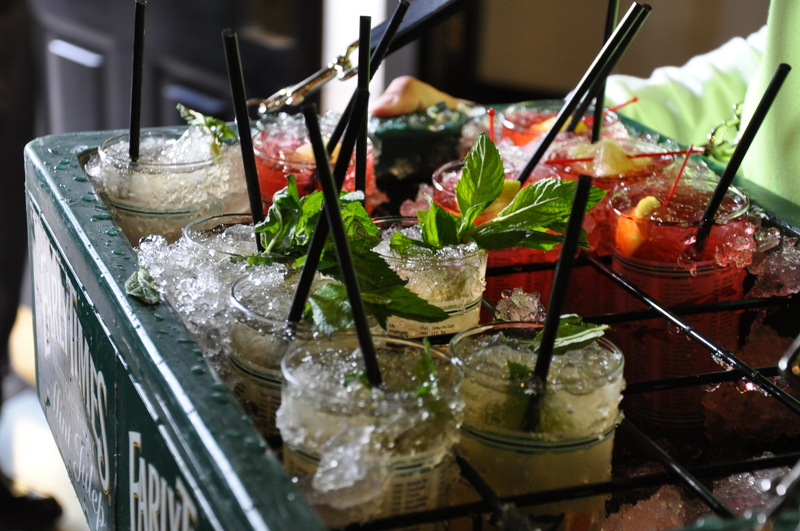 Mint condition: Each year, over 120,000 glasses of mint juleps are served at the Kentucky Derby

The cocktail, like all good classics, is simply constructed and refined to perfection: sugar, mint, crushed ice, and bourbon whiskey creating an alchemy so coolly, headily refreshing that in the 1800s, a journalist from Lexington, Kentucky was driven to compose a rather lengthy poem to confess his undying devotion to the drink:

…Then when it is made, sip it slowly.
August suns are shining,
the breath of the south wind is upon you.
It is fragrant, cold and sweet – it is seductive.
No maiden’s kiss is tenderer or more refreshing,
no maiden’s touch could be more passionate.
Sip it and dream – you cannot dream amiss.
Sip it and dream – it is a dream itself.

There is no single, consistent telling of the history of the mint julep, but most accounts trace its origins back to the American South’s agricultural heyday in the 18th and 19th centuries, when farmers would have a cold cup to start the day. Interestingly enough, the julep’s past reaches further back and across oceans–to the Middle East, where, according to Woodford Reserve’s Master Distiller, Chris Morris,  it was known as a julab: a cold drink made with water and tinged with rose petals. As its popularity spread to the Mediterranean and then Europe, mint leaves eventually replaced the rose petals, and upon reaching colonial America, natively produced whiskey was introduced into the mix. Rum may have even been used in its early years (making something more akin to a mojito), as that would have been more easily accessible.

At any rate, by the time the Kentucky Derby came into being in the 19th century, the recipe of sugar, crushed ice, mint, and Kentucky bourbon had solidified its delicious reputation: to this day, the same ingredients prevail, with perhaps simple syrup or flavored syrup substituted in lieu of sugar. You wouldn’t be wrong, however, to use corn whiskey in place of the bourbon–after all, in its formative years, the mint julep was made with whatever spirits were most available: in the rougher years of pre-Industrial Revolution America, premium aged bourbon didn’t exactly exist yet.

Should you be eager to have this recipe mastered in time for this weekend’s big race, give the original method a try, with no fancy additions: the original, after all, is what made the cocktail so good–and so beloved.

Place 1-2 sprigs of mint and 2 tablespoons of sugar in the bottom of the glass. Gently crush leaves and muddle in with sugar, going up the sides of the glass. Pack glass loosely with crushed ice; pour bourbon or whiskey all over. Sprinkle with a light dusting of sugar on top and garnish with remaining mint sprig.