Figures compiled by Tech Nation and Dealroom for the Digital Economy Council show that investors continue to back some of the UK’s most promising tech teams, despite the challenges posed by Covid-19.

Read the full report compiled with @dealroomco for the Digital Economy Councilhttps://t.co/vaJY5AHEHY

As members of the UK tech sector meet virtually during #LTWConnects events, figures show UK digital tech companies are continuing to attract investment, are still advertising vacancies and are optimistic that they can navigate the crisis. On measures including investment raised by companies and capital raised by investors – which will help sustain the sector for the long term – the UK outperforms all of its European neighbours.

Just as the 2008 financial crisis triggered an entrepreneurship boom in the UK, from which Silicon Roundabout’s cluster of startups has grown into a nationwide network of more than 35,000 businesses, the report demonstrates that UK tech is resilient and has deep foundations to emerge strongly from the crisis. Tens of thousands of jobs were advertised in cities across the UK in 2019 and the start of 2020, with salaries continuing to grow well-above inflation in almost all regions.

The UK capital continues to lead the way and is now established as a global tech leader with London-based companies raising $4bn (£3.2bn) since the start of January, more than Paris, Stockholm, Berlin and Tel Aviv combined. Fintech dominates fundraising in the capital, accounting for 39% of 2020 fundraisings. Enterprise software companies raised a fifth of the money invested in the first five months of the year. 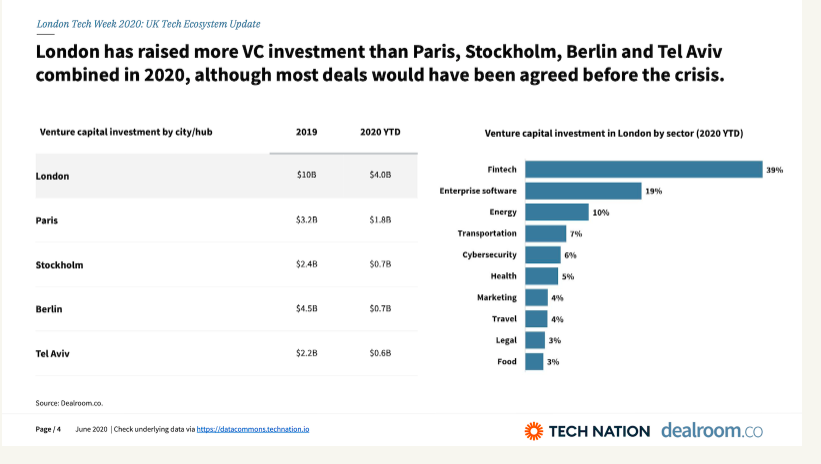