It’s a tough climate for equity managers, and it may get worse before it gets better. But Advisory Research Chief Executive Brien O’Brien is confident that the asset class will regain its stature at the top of the heap.

“Ten years from now, public equities will have been the best place to make money,” O’Brien told Markets Media in an Oct. 25 interview. “You just have to be ready to live with the volatility.”

The Standard & Poor’s 500, the main U.S. stock benchmark, is down slightly compared with five years ago, and investors have had to withstand substantial tumult just to achieve a barely break-even (including dividends) return. Aside from the broad risk-return imbalance, there have been multiple confidence-sapping micro events in recent years, notably including market-structure glitches and big-bank improprieties.

“Most institutions are de-funding the equity space,” O’Brien said. “About 80% of the search activity in financial markets has been in alternatives for the past couple of years.” Chicago-based Advisory Research has bucked the trend, according to O’Brien, and the firm’s assets under management increased to $9.2 billion as of Sept. 30, from about $6 billion in 2009.

Advisory Research has almost $4 billion invested in small-cap and small-to-midcap companies and $3 billion invested in master limited partnerships (MLPs). Aside from those core products, the firm has investments in micro-cap equity, an energy hedge fund, and a few income-oriented products. Advisory Research’s client base is 55% institutional, which spans endowments, foundations, and pension funds; 25% open-end and closed-end funds; and the remainder is high-net-worth individuals and family offices.

“We are a leading performer in the institutional space—we’re good at what we do, and clients have stayed with us,” O’Brien said. “We’re seeing net new asset growth in the closed-end space, the open-end mutual-fund space and in energy MLP.”

INVESTMENT METHODOLOGY
O’Brien describes Advisory Research as a “classic value manager” that is concerned about valuation first and foremost.

“We buy companies that are selling at a discount to book value,” he explained. “Book value doesn’t necessarily mean just cash on balance sheet or hard assets, it could be something such as value per subscriber in the case of a telecom company. Generally we buy profitable companies with asset-rich balance sheets and low debt to equity. We also look for a management team that recognizes they have an asset-rich balance sheet and wants to utilize those assets to increase returna.”

Advisory Research buys a stock with the intention of holding it for a long time. The average holding period is three to five years, and a significant part of its sales come after an owned company gets acquired by another company.

As examples of key holdings, O’Brien cited Plains All American Pipeline, a midstream energy company with a strong management team that has expanded the company via acquisitions as well as organically, and Leucadia National, which O’Brien described as a “mini-Berkshire Hathaway” that has an asset-rich balance sheet and very low corporate overhead. Advisory Research has been a shareholder of both companies since the 1990s.

O’Brien, 55, spent a few years apiece at Oppenheimer and Bear Stearns before going off on his own in 1986 and founding an investment firm called Marquette, which was merged into Advisory Research in 1996. O’Brien’s long-time friend and business partner, David Heller, passed away earlier this year at the age of 81.

Value portfolios are typically not high flyers; they are more accurately likened to a belt-and-suspenders apparatus that limits downside. Advisory Research is no exception, as the firm strives to meet or slightly exceed market returns during bull runs, and outperform significantly through bearish times.

Advisory Research’s $1.8 billion Small-Cap Value Fund has generated average annual gains of 15% before fees since its inception in 1987, compared with 10.5% for the benchmark Russell 2000 Value Index.

“It varies by product, but overall we have provided returns well in excess of benchmarks,” O’Brien said. Before fees, Advisory Research’s core Small-Cap Value and Small/Mid-Cap Value funds have outperformed their benchmarks in rising markets by about 5-7% on average since inception, while avoiding about 20% of the pain of market declines, according to O’Brien.

Gregory Weaver, chairman and founder of investment consultancy Gregory W Group, said he has retained Advisory Research to manage money for large clients on several occasions. “There are lots of positives that attracted us to the firm,” Weaver said. “The firm has consistent senior leadership and has committed necessary capital to attract and retain high-quality research analysts. They are an understandable, value-oriented manager, and we know what we are going to get when we hire them.” 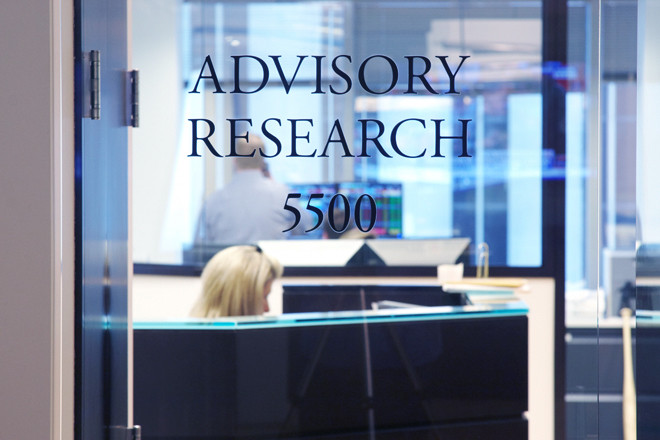 Advisory Research’s value approach doubles as a risk-management tool. “We manage risk at the time of purchase,” O’Brien said. “The number-one rule of Advisory Research is that we evaluate a stock not for how much money we can make, but we want to understand how much money we can lose. By buying a company with a strong balance sheet, it gives us a fortress that protects us as shareholders.”

The firm avoids companies that use debt as a primary funding source, with exceptions for financial-services companies where debt funding is standard. “We would not buy a heavily indebted manufacturing company on the cheap, hoping they can do a turnaround,” O’Brien explained. “We will buy a manufacturing company that may not be doing very well but has good potential on the upside, low debt, and a management team that recognizes the value. The absence, or small amount, of debt on the balance sheet creates a tremendous opportunity for shareholder protection and gives management the runway they need to develop and grow.”

As a ‘bottom-up’ manager, Advisory Research doesn’t make investment decisions based on big-picture forecasts or outlooks, but O’Brien and his colleagues pay close attention to macro events for how they may affect valuations. “For example, we’re finding some great opportunities in Europe with all the negative news,” O’Brien said. “We are able to find European-domiciled companies that are generating in excess of 50% of revenue and profits from emerging markets. This is a classic case of the baby being thrown out with the bathwater – let’s sell the company because it’s European, without realizing that a majority of its business and growth comes from outside Europe. This creates an opportunity for us to be able to buy these companies at a discount.”

FINREG VIEW
Regulation is another market dynamic that Advisory Research looks at through a bottom-up prism. “With regard to how the Dodd-Frank legislation is affecting us, there are some opportunities becoming apparent in small and mid-sized U.S. banks, because there’s going to be forced consolidation,” O’Brien said. “The regulatory management ability of a small or mid-sized bank may be limited and it would cut into their profitability. Putting those companies together would create significant cost savings.”

Advisory Research uses derivatives occasionally in its energy hedge-fund portfolio, but futures, options and swaps are not an area of focus. “When we buy a stock, we’re planning to hold it for a long time, but when you’re working in derivative markets, you’re usually trying to express a shorter-term sentiment, protect the portfolio from volatility, or express a broad market view,” O’Brien said.

Even as a long-term investor, the migration to electronic trading represents a “significant and marked shift” for Advisory Research, as it has reduced information leakage and trading friction. “We have gone from probably zero electronic trading 10 years ago to about 50% percent electronic trading today, and I see that going to 75-80% over the next four to five years,” O’Brien said. “It’s where the world is headed.”

“This is one area where technology has really been beneficial to our trading because historically, when it became known that we were buying a stock, people would start front-running us,” he continued. “Now, we’re able to operate through the dark pools and buy more anonymously, which has been a big advantage and benefit to us and for our clients.”

O’Brien reported no direct impact from recent market-structure glitches, but he noted the indirect impact of the highly publicized incidents undermining investor confidence. “The main implication for us is that it is causing investors to de-fund active equity management,” O’Brien said. “So much of public equity market results are based on long-term confidence, and when you have things like the ‘flash crash’, Knight’s trading situation, and program trading run amok, those issues create a lack of public confidence in the marketplace and that causes people to either sell stocks or not invest.”

In O’Brien’s opinion, bringing investors back to the equity market will require greater economic stability and a reining in of “excessive” high-frequency trading.

Advisory Research does all its research internally rather than rely on Wall Street, and the firm has built its own proprietary screening and analysis systems to support its research effort. “We buy other systems for portfolio accounting, compliance, and we also use Bloomberg very actively. They are one of the best value propositions on The Street,” O’Brien said. Charles River is Advisory Research’s trading-system provider of choice, covering portfolio management trade allocation.

With regard to corporate culture, O’Brien said Advisory Research does little lateral hiring; the first year or two can be difficult for a new hire to survive, but once done so, that person typically stays with the company for a long time. The firm has recently ‘globalized’ its staff by hiring more people from different countries and with international experience; executives try to foster an open, interactive environment, and the office itself is unusual in that the trading desk is right out front. “I wanted the energy of the firm front and center when you walk in,” O’Brien said.

Outside work, O’Brien competes in sailing and tobogganing events, including the National Toboggan Championship in Maine. He jokes that the excitement of the markets makes sports boring by comparison, but the Boston College graduate still raves about the 2004 World Series, when the Boston Red Sox came back from a 3-0 deficit to defeat the New York Yankees, four games to three. “There were no less than 150 pitches that could have changed the outcome of games, and the final innings of every one of those games were heart-pounding,” he said.

While the markets remain difficult, O’Brien said Advisory Research will persevere, exploiting volatility where it can to buy stocks on the cheap.

“People will do any trade right now to avoid volatility, but smart money will use volatility as its friend,” he said. “Value investing is the very best place to make money over a long period. Value investing may go in and out of fashion, but it never goes out of favor.”