But when a market breaks out of a holding pattern, as recently happened in fixed income, that’s when institutional managers can earn their keep 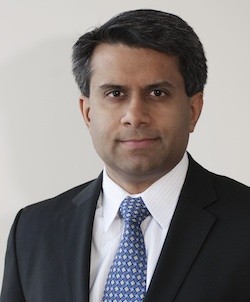 “Volatility is an exceptional opportunity for public and private pension plans to test the skills of their active portfolio managers,” said Karthik Ramanathan, senior vice president and director of bonds at Fidelity Investments. “Alpha generation requires both the agility and ability to uncover opportunities, and as an active asset manager we are excited to take advantage of these opportunities.”

Yield on the 10-year U.S. Treasury bond ranged mostly between 1.5% and 2% for the 13 months ended in May, an extraordinarily quiet period of historically low yields. But the benchmark yield rose to 2.5% in June and as high as 2.98% on Sept. 5, amid increasing speculation that the Federal Reserve would start to unwind its quantitative easing program.

“Volatility is an exceptional opportunity for public and private pension plans to test the skills of their active portfolio managers.”

Ramanathan looks at the Merrill Lynch Option Volatility Estimate as a metric of fixed-income volatility. The so-called Move Index is a yield-curve-weighted average of the normalized implied volatility of one-month Treasury options for two-year, five-year, 10-year, and 30-year maturities. Other gauges of bond volatility are the CBOE Volatility Index (VIX), which is known as a proxy for broader market volatility, and the implied volatility of swap spreads.

Over the past couple years, markets have been characterized as ‘risk-on, risk off’, with risk emanating primarily from macro factors such as Central Bank action or European sovereign-debt developments. “The end of the risk-on, risk-off trade gives those asset managers with depth of research a significant edge versus those just focused on the macro trends,” Ramanathan told Markets Media in an Aug. 21 telephone interview. “Embracing this volatility in fixed income markets and seizing mispriced securities in credit markets could lead to significant long-term outperformance.”

Of Boston-based Fidelity’s $1.7 trillion under management, more than $900 billion is in fixed income, spanning $500 billion in money-market securities, $350 billion in bonds, and more than $50 billion in credit. Known as a research-intensive asset manager, Fidelity stands to benefit when security-price fluctuations show less correlation, Ramanathan indicated. “Our size, scale and resources give us a real edge,” he said.

Point Man
Ramanathan is the point man for Fidelity’s fixed-income business with institutional clients, with responsibility for providing strategic advice and customized products and services, as well as building the firm’s international business, especially with central banks and pension funds in Asia. His duties are big-picture, 30,000 feet up, but he also rolls up his sleeves to get involved at the individual-client level.

Ramanathan, 40,  joined Fidelity from the U.S. Treasury Department in 2010. The hire was a coup for Fidelity, as Ramanathan had direct government-debt experience from his Treasury roles as acting assistant secretary for financial markets and director of the U.S. office of debt management. Prior to his five years at the U.S. Treasury, Ramanathan was at Goldman Sachs for almost 10 years.

“I oversaw the United States Treasury debt portfolio and was responsible for the issuance of over $9 trillion in debt in my last year in government,” Ramanathan said. “Since I was responsible for issuing the debt of the U.S, I built very deep relationships with some of the largest pension funds and central banks globally, particularly in Japan and in Asia.”

“These institutions were essentially our ‘clients,’ and we needed to make sure we knew what they were thinking and make sure we maintained direct lines of communication,” he continued. “The deep relationships I formed while at Treasury have helped me in my current role.”

The U.S. Federal Reserve and other central banks are almost inarguably the biggest influences on world markets currently, as traders and investors look for clues as to when and how policy makers will start to wind down quantitative easing programs. Given Ramanathan’s background — the Wall Street Journal called him the ‘$8 trillion man’ in a March 2010 article — it’s reasonable to assume that Fidelity’s institutional clients value his reading of the monetary-policy tea leaves.

Ramanathan noted that when the 10-year Treasury yield was near 2.9% around Aug. 21, it indicated that market participants were expecting reduced quantitative easing in the ensuing months, in the form of fewer purchases of Treasuries and mortgage-backed securities.

Those expectations have since backed off somewhat, and the 10-year yield receded to 2.65% by early October. “When there is a resolution on Fed policy and who is making it, the markets may settle into a new range,” Ramanathan said.

With regard to the closely watched change at the top of the Federal Reserve, Ramanathan suggested the market may be overestimating the importance of who will succeed Ben Bernanke. As an example of the market’s watch, bond yields on fell on Sept. 16 after Larry Summers, perceived as comparatively hawkish, withdrew his name from consideration as the next Fed chairman, leaving Fed Vice Chairman Janet Yellen as the leading candidate.

“While the choice of the next Fed chairman is important, looking more broadly across the global economy may be more informative,” Ramanathan said.

And even the market is correctly assessing the importance of who sits in the Fed chairman seat, expectations about how that person will set policy may prove incorrect. As Ramanathan stated, “the press has made predictions on what candidates may focus on. But once they’re in office, any new Chairman will likely have to adapt to the current markets and may present different ideas and perspectives than expected.”

Ramanathan is fairly constructive about the domestic picture. “One factor which may be ignored by many investors is how much the fiscal situation in the U.S. has improved,” he said. “The U.S. will be issuing less debt as the deficit approaches 4%, or even potentially 3%, of GDP this year. Lower Treasury issuance could possibly blunt lower Federal Reserve purchases.”

When he’s not studying institutional bond portfolios, Ramanathan enjoys spending time with his wife and three sons, and writing about what he calls the “nexus of finance,” Washington, D.C. A graduate of Columbia University with degrees in mathematics and economics, Ramanathan was awarded the National Security and International Affairs Finalist Medal in 2010.

Inquiries from Fidelity’s international institutional clients have mostly been about Fed policy and the Fed chairman, but Ramanathan is looking ahead to what’s next once there’s some clarity on those items.

“Our advice to many investors is that rates may indeed rise, but a sharp rise in rates would pressure an already fragile economy,” he said. “Given the high unemployment rate (as measured by participation level), the slack in the economy and a slowdown in China, inflationary pressures remain low while economic growth remains limited. At some point when rates lead to a stalling economy, the Federal Reserve may once again need to implement easing measures.”

Another major focus for fixed-income investors is whether a ‘great rotation’ is afoot. Under this bearish-for-bonds scenario, investors wary of low yields and higher interest-rate risk flock to stocks for a more attractive risk-reward proposition.

Ramanathan indicated the jury is out. “There have been industry-wide flows out of emerging-market debt and government securities such as Ginnie Maes, so we have certainly seen some movement,” he said. “At the same time, whether a significant amount of these assets move into equities may be less clear, given demographics and risk aversion.”

A final investor concern cited by Ramanathan is how to position portfolios and allocate assets for what may be a protracted period of rising rates. There are more questions than answers here, especially as such a scenario would be largely unprecedented.

“Are the risk models that investors have used over the past 30 years no longer valid? What will liquidity be like in credit markets given regulatory changes? Is this generation of portfolio managers and traders — many whom were not managing money during the sharp rise in rates in 1994 — capable of identifying and managing risk in a rising-rate environment?” Ramanathan asked. “These uncertainties really need to be examined, since we have not seen such a potential scenario in over 30 years.”

With the benchmark 10-year yield at least a few percentage points below historical averages, bonds aren’t going to deliver the returns of years past. “Many investors need to lower their expectations for returns in fixed-income asset classes,” Ramanathan said. “Fixed income has typically been used as a source of diversification within a portfolio, and we do not believe that will change. Equity prices will likely remain volatile, and an allocation to fixed income will likely dampen some of that volatility.”

“The liquidity and the opportunities in corporate bond markets in the U.S. will likely continue to attract asset flows.”

“Unconstrained strategies, in particular, are in demand as clients need to be nimble in the allocation of bond assets in a rising-rate regime,” Ramanathan added.

One attractive area within fixed income is corporate bonds, from both U.S. and international issuers. Yields on some actively traded U.S. investment-grade issues are running about 2 percentage points more than Treasuries.

“I like to call it ‘Fortress America’,” Ramanathan said. “The liquidity and the opportunities in corporate bond markets in the U.S. will likely continue to attract asset flows, as investors such as insurance companies and defined benefit plans seek to lock in higher yields.”

Further to liquidity, Ramanathan noted that some changes to bond-market structure over the past several years, such as more stringent price-reporting requirements and a weakened and regulation-constrained sell side, have limited trading. “We’re going into a new environment with less risk-taking appetite, high regulatory burdens and a significant desire for transparency,” he said. “In such an environment, liquidity potentially can be impacted; as asset managers, we’re closely and monitoring that with our partners from the sell side.”

“It’s okay to wait, particularly in this environment,” he said. “Whether it’s in mortgages or corporate bonds or high yield, the dispersion works for those who can uncover opportunities over time, not just jump on it.”

“Moreover, investors shouldn’t classify fixed income as one homogenous asset class,” Ramanathan continued. “Particularly in asset classes like corporate bonds, high yield, or leveraged loans, there are certain sectors and specific companies that show more opportunity than others. Identifying idiosyncratic risk is key in this environment, versus broad macroeconomic wagers.”