The Wine List Takes Center Ring at This Circus

How ‘ringmaster’ Sirio Maccioni and his family’s knowledge of wine has proved that since 1974, there’s been no clowning around at LeCirque.

While the family-run LeCirque has always had excellent service and great food, it is their wine list that has changed the face of Italian and American wines over the past 40 years, and is a huge factor in the success of the restaurant. “My father, Sirio, was one of the first to introduce Italian wines at such a high-quality level,” says middle son and Wine Connoisseur Marco Maccioni. “He fought with the stereotype that anything from Italy wasn’t as regal as French cuisine was in the past.” What consumers were unaware of, was that Italy has over 200 different grape varieties, making for excellent wines that Americans had yet to experience. Sirio was able to gain the trust of his customers by serving them Italian wines that cost a tenth of what they were paying for French wines, putting him on the map as one of the biggest promoters of Italian wines at such an upscale level. 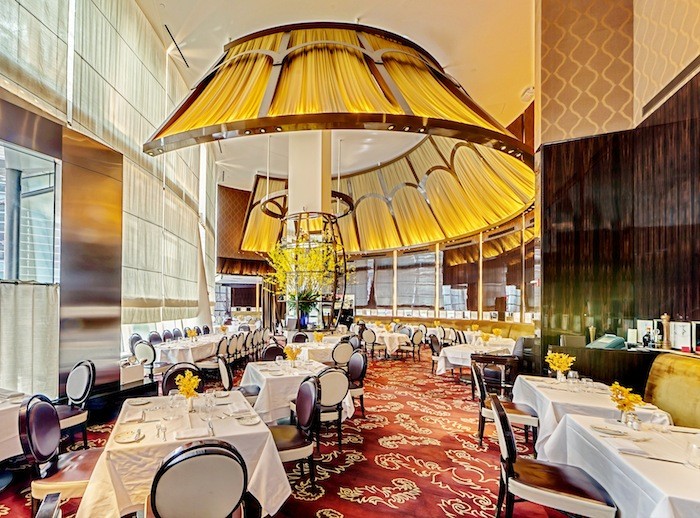 “My father wanted to decorate his customers experience at the table with new things, and be an ambassador for things that they weren’t exposed to on their travels,” Marco says.These Italian wines started to gain importance because they were being served at LeCirque. Over the years, as wine started to develop and expand, there was an increased demand for higher priced wines because those wines were more sought after. As demand increased and supply stayed the same, the price went up. “You have to fill those holes with other things,” Marco explains, “first it was Italian wines. American wines came after that.” 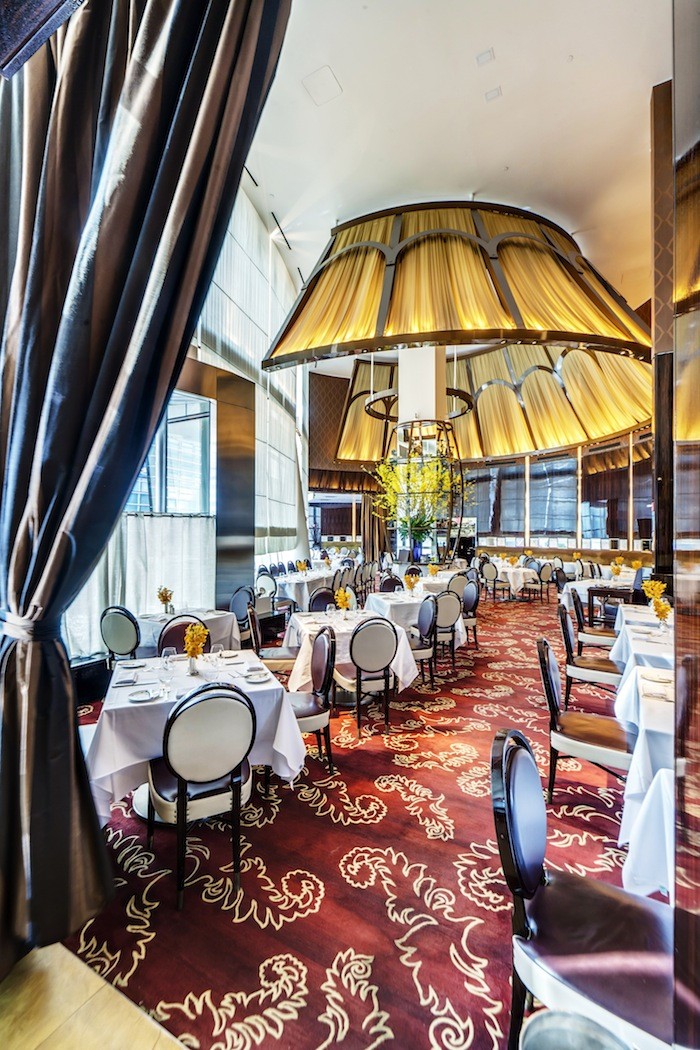 American wines had a bad reputation back in the 60s and 70s. Consumers didn’t identify quality with these wines until the late 80s and 90s. “That’s simply because the wine needs time to take its course,” says Marco. People would open American wines when they were infanticide, and hadn’t yet aged into fine wine. “When Americans made their wines, those same grapes that were soft and velvety in France were much bigger in America,” Marco explains, “causing the wines to have a stronger and more uneven taste if not fully aged.” Sirio showed his diners that given the proper time to age, American and Italian wines were just as upscale and delicious as French wines. 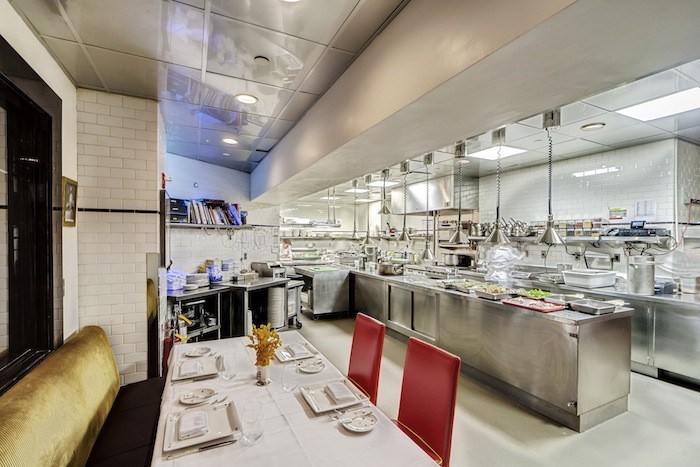 Chefs Table inside the kitchen

Each Maccioni son soon followed their father into the restaurant business, expanding Sirio’s empire. Marco took on his fathers wine expertise. He spent years in France learning about wines, and along with Wine Director Paul Altuna, is extremely knowledgeable when it comes to pairing wine with food. They understand that wine plays an amazing role in the experience, and want to hit on the full sensory with their diners. “It’s not just the expensive wines,” Marco says, “It’s the right wines.” He explains how the biggest mistake most people make when they go to a restaurant is not to listen to the recommendation of the wine director. When Marco goes to a table, he listens to what they want, tries to get some feel about what the diners came to the restaurant for, and matches the wine to not only their food but their personality and occasion. “It would be a disservice for me not to open up the customers eyes to the wines like my father did and show them things that they may not have known or have been resistant to,” Marco explains. 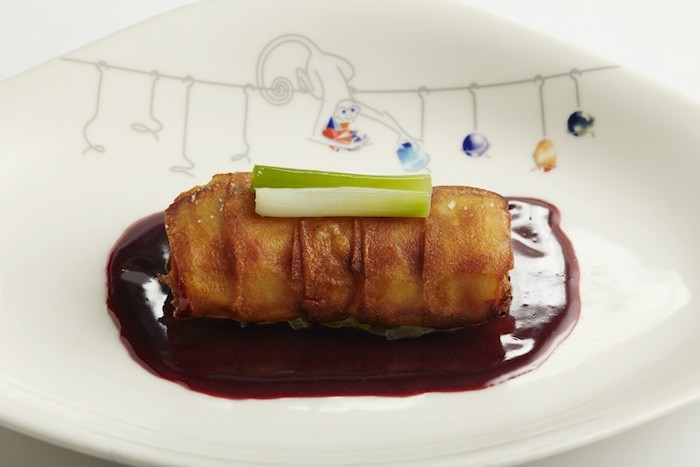 One rule of thumb when it comes to pairing wines is that you take wherever your food is known to come from and match it with a wine from that area. Keeping that in mind, Marco says “If I’m eating seafood from the Amalfi Coast, I’m going to pair it with a wine that’s done on the slopes of Mount. Vesuvius.” At LeCirque, their most popular dish is the black cod wrapped in Paupiette, with a red wine reduction sauce. “Back in the 80’s when this dish first came on our menu, and our chef was Daniel Boulud,” Marco says, “people were confused by the pairing of fish with red wine.” Knowing the flavors, along with the cooking procedure and region that the dish is from, Marco pairs it with Rocca di Frasinello, which is the same wine used in the reduction sauce. “Coming from the plate into the palate, and also being in their glass, it’s such a natural pairing,” explains Marco. 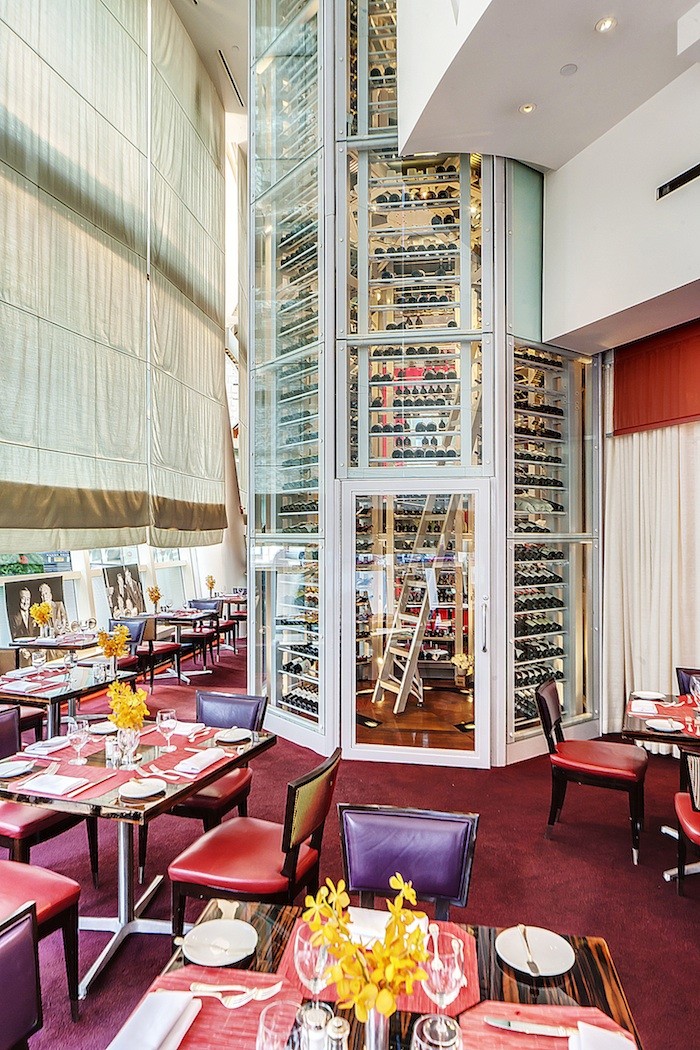 The 2-story Wine Tower reaches from the floor to the ceiling of the restaurant.

In 1995, LeCirque moved to its current location (151 E 58th St), and the Maccioni family felt that their extensive wine list should be displayed. In keeping with the circus theme of LeCirque, Sirio’s wife Egidiana designed the first two-story wine tower. “She wanted to showcase their selection of wines, while still taking great care of the wines so they don’t spoil,” Marco says. Egidiana, along with the restaurant’s architect, created a glass encased, floor-to-ceiling honeycomb arrangement, where the bottles are placed horizontally, filling each slot, thus achieving her goal of making the wine tower a top attraction at the restaurant. Today, their award winning wine list covers the world, and the wine tower holds a selection of every bottle the restaurant offers. The wine list consists of about 2500 bottles in full stock. 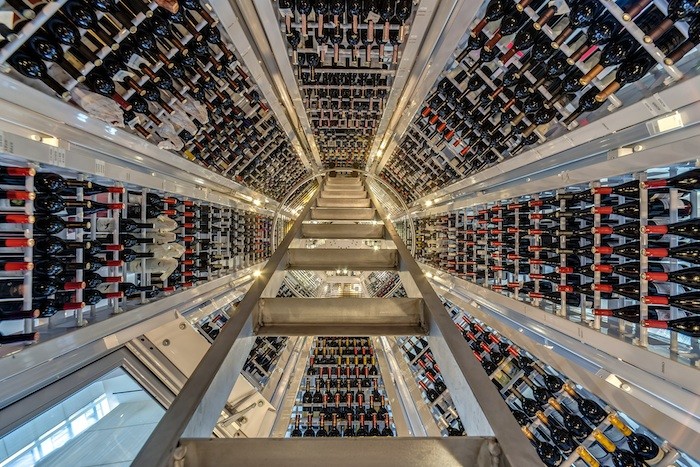 Honeycomb shape of the Wine Tower

In the past, what hindered wine experiences for guests as well as for a restaurant was the inability to sample a wine because of its cost, or because you were 2 people and didn’t want to sample a bottle. Today, a new technology from a company called Coravin, allows you to sample glasses of expensive wine without compromising the bottle. LeCirque is one of the few restaurants to have this brand new technology. You attach the system to a bottle, where a long needle goes through the cork without removing it, allowing you to pour the fanciest bottle of wine to anyone who may desire, without opening it. When that exchange of liquid goes out, there is a capsule that refills that void with the same level of natural Argon gas, creating the illusion that the wine was never opened. They offer a list of prestige wines by the glass because of this new technology. Head over to LeCirque for upscale French dining and try these prestigious wines, order a bottle from their wine list, or sit at the exclusive Chef’s table and experience the restaurant that’s stood the test of time.