Essentia Analytics, which provides behavioral data analytics and consulting for professional investors, found a 160 basis point annualized relative performance between managers who engaged with nudges and those who did not.

Clare Flynn Levy, founder and chief executive of Essentia Analytics, told Markets Media: “When I was a fund manager I wanted this data-driven feedback.”

Flynn Levy founded Essentia Analytics in 2013 after spending a decade as a fund manager. Her previous experience included running more than $1bn of pension funds for Deutsche Asset Management and as founder and chief executive officer of Avocet Capital Management, a specialist technology hedge fund manager.

Her thesis is that all people, including fund managers, have hardwired biases so it is useful to have something watching over your shoulder as you make decisions.

“We created behavorial nudges that interact with portfolio managers in the moment, or near the moment, when it really makes a difference,” she added. “It keeps that information about your biases top of mind and serves up questions that the manager said they would ask themselves in certain situations.”

Flynn Levy continued that since Essentia was launched, 75% of clients improved their performance after twelve months by an average of 150 basis points of incremental alpha per year. The firm wanted to investigate the difference between the 75% of clients who improved performance and the 25% who did not, and tested nudges.

New from Essentia Research: Our analysis of 75 real-world portfolio managers shows a 160bps difference in annualized relative performance between managers who engage with behavioral nudges and those who do not. #BehavioralAlpha https://t.co/sPvlUySPQG

She explained that the firm has two types of nudges. The first category is based on time, so the fund manager can choose when and how often to receive these nudges. For example, a brain dump nudge has a blank box to prompt a manager to journal.

The second type of nudges are automatically triggered by events such as a change in a stock price. For example, fund managers can set the entry or exit of a given position.

“Fund managers and analysts do so much work on the investment thesis but less on what could go wrong, and the point at they should get out isn’t necessarily something they’re thinking through at the very beginning,” said Flynn Levy. “Yet, if they do, they can make a much more objective decision down the road, and we have this data capture on day one.”

Essentia’s data may show, for example, that a fund manager has a pattern of holding on to an underperforming stock for a certain length of time, and will send a nudge if they are approaching that period again.

“It depends on how big the position is, but managers can have lots of slow bleeders,” she added. “Each position does not seem to be doing much damage but when you add them together they do a lot of damage. So this calls their attention to that situation when they’re in it.” 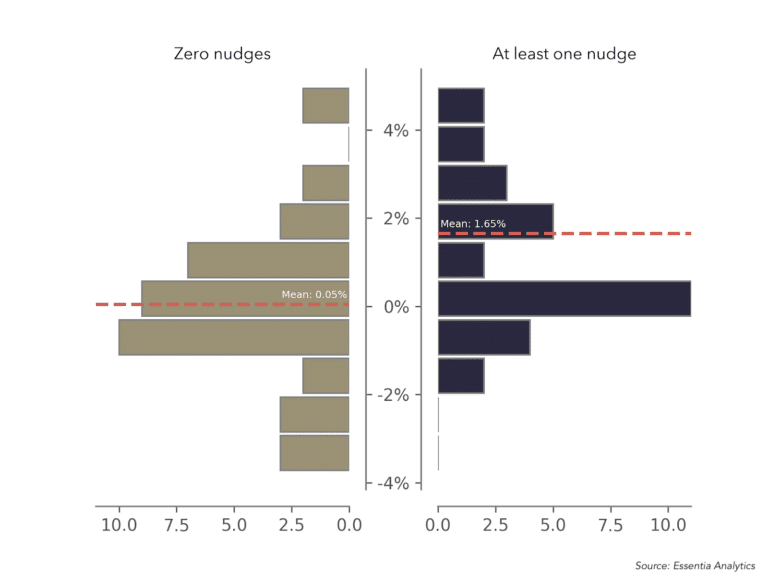 Chris Woodcock, who leads the research and product teams for Essentia Analytics, said in a blog that managers who responded to more nudges per month tended to enjoy significantly better performance than those who engaged with fewer nudges.

He wrote that although the data doesn’t prove causation given the myriad exogenous factors that affect outcomes, there is a clear correlation between nudge engagement and portfolio performance. The difference between managers who never submitted a nudge and those who submitted at least one nudge at some point during the period was 160 basis points of relative performance.

“The results, while expected, were dramatic, and we couldn’t help but extrapolate a fun fact from this data: on average, every monthly response correlated to an additional 18 basis points of alpha per year,” Woodcock added.

Flynn Levy described the difference between performance as quite stark.

“People that are willing to be super-disciplined and go the extra inch, are the ones who are going to survive and thrive in active management,” she added. “Those people are starting to come to the fore at the top of investment businesses.”