The Bank of England said the use of swap execution facilities in the U.S. has led to an increase in activity and liquidity, and a decrease in costs, as mandatory clearing is due to be introduced in Europe this year.

The Dodd-Frank Act in the U.S. introduced voluntary trading of specified interest rate swaps involving U.S. persons on SEFs in October 2013, which then became mandatory in  February 2014. In the European Union firms will have to start centrally clearing certain classes of interest rate swaps from 21 June 2016.

SEFs introduced electronic trading platforms and transparency into a previously over-the-counter bilateral market through the use of a central limit order book which allows any market participant to supply liquidity by posting bids and offers and changing the request-for-quote ‘dealer-centric’ pricing model. On a SEF a client’s request for a quote is disseminated simultaneously and instantly to multiple dealers, instead of just one, allowing the end user to easily compare prices and encourage competition for order flow.

In a study, “Centralized trading, transparency and interest rate swap market liquidity”, the Bank of England analysed plain vanilla interest rate swap transactions in U.S. dollars and euros on U.S. SEFs. The study said: “We find that, as a result of SEF trading, activity increases and liquidity improves across the swap market, with the improvement being largest for U.S. dollar mandated contracts which are most affected by the mandate.”

The Bank of England added that the associated reduction in execution costs is economically significant with daily savings of between $7m and $13m daily for market end-users (i.e. non-dealers). 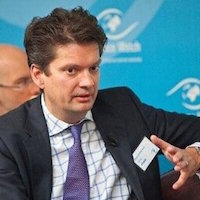 Remco Lenterman, former chairman of the FIA European Principal Traders Association said on Twitter: “Remember how Dodd-Frank was widely opposed by the oligopoly of swap traders. This $7m to $13m is money that goes from the pockets of traditional swap bank dealers straight into end-users pockets.”

The Bank of England also said that inter-dealer activity dropped concurrently with the improvement in liquidity suggesting that execution costs may have fallen because dealer intermediation chains became shorter.

Lenterman tweeted: “New, non-bank market makers are having an impact on the swaps market’s pricing by streaming tradeable quotes and narrowing spreads.”

For example Citadel Securities launched an interest rate swaps market-making business in 2014. Paul Hamill, global head of fixed income, currencies and commodities at Citadel Securities, said on the firm’s website: “Under the old market structure, trading swaps involved manual negotiation with a lot of back-and-forth between salespeople, with little transparency around price. By introducing our technological and quantitative capabilities into the market, investors now benefit from immediate execution, firm pricing and consistent liquidity in all market conditions.”

Concerns have been raised that the Dodd-Frank SEF requirement has caused the swap market to fragment geographically.

The Bank of England agreed that the launch of SEFs did reduce the proportion of trading between U.S. and non-U.S. persons, particularly for euro-denominated swaps, as some non-US parties did not want to have to trade on a SEF.

“However, this does not appear to have compromised liquidity,” added the Bank. “Given the beneficial effect of SEF trading on U.S. dollar contracts and the global nature of over-the-counter derivatives markets, our findings suggest that extending the scope of the trading mandate to cover other sufficiently liquid swap markets would be desirable.”