FOR LARGE INSTITUTIONAL asset man­agers, a gangbusters year is nice, but the real objective is to do at least reasonably well, every year for an extended period of time,

“In this business, if you can stay out of the bottom quartile — or even the bottom half — on a three- and five-year basis, your numbers can be fairly compelling,” said Brian Hogan, president of the equity and high income divi­sion at Fidelity. “Given the fact that we are beating more than two-thirds of our peers on a three- and five-year basis, I would say our performance has been fairly compelling.” 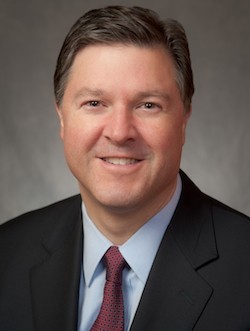 In 2013, Fidelity funds beat their respec­tive benchmarks by 133 basis points, on an asset-weighted basis and after fees, Hogan said. Over the past five years, the average outperformance was 103 basis points.

Hogan’s group manages about $750 billion of equities; firm-wise and across asset classes, Boston-based Fidelity reported about $1.7 tril­lion under management as of Oct. 31, 2013.

Large institutions such as Fidelity tend to align their investment focus with that of the pensions, endowments and other long-term asset owners who are their biggest clients.

Founded in 1946, Fidelity doesn’t need to top the rankings in any given year, but it’s cru­cial to avoid the bottom.

“We’re making good progress toward our goal of delivering consistent performance across all of our equity funds,” Hogan told Markets Media. “While we are big and man­age a diverse family of funds, our perfor­mance has been fairly consistent for a long period of time.”

Trading efficiently is vital for an invest­ment firm to generate peer-beating outperformance, as every basis point lost to friction is a basis point lost in return. To that end, Bob Minicus, Fidelity’s head of global equity trading, has the ground covered.

Minicus focuses primarily on execution quality and developing a broad spectrum of execution capabilities, ranging from low-touch to high-touch.

“One of my key responsibilities is to have an understanding of market structure,” said Minicus, who oversees equity trading in Bos­ton, London, and Hong Kong. “Confidence in market structure really equals investor confi­dence, and there has been a lot over the last two to three years that has shaken investor confidence, whether it be the great reces­sion, or excessive market volatility, or things like the ‘flash crash’ and the Knight glitch.”

“Market structure is also important because it informs our understanding of how to archi­tect our approach to the market,” Minicus continued. “Our shareholders and my col­leagues in the investment process expect us to navigate the market with skill. So over the past couple years, and in 2013 specifically, we have made significant commitments to quan­titative analysis, as well as our market-access technology.”

Fidelity recently beefed up its trading desk with the addition of four quantitative analysts, who are good at building trading tools and/or measuring performance. One specific quant initiative on the Fidelity desk is what is known as alpha profiling.

“If you can get closer to portfolio manag­ers and increase the intelligence you have around the portfolio manager’s sense of urgency and conviction, it will better inform you of the acceptable level of market impact you’re willing to exert on a stock,” Minicus explained. “The answer isn’t always to exert as little impact as possible. There are differ­ent answers based the thesis.”

As would be expected with a massive and diverse fund-management company such as Fidelity, trade orders run the gamut from very small to very large, and from the most electronic and automated to those calling for the most human attention. Fidelity’s trades fall under four categories on the touch scale, according to Minicus.

For the lowest-touch trades, “we have col­laborated with our brokers to create algo­rithms that allow us to get to the marketplace in a non-impactful way,” Minicus said. “We measure everything. We don’t trade in every venue — we trade in the venues where the toxicity levels are low, or at least acceptable.”

“We’ve rewritten our broker-provided algo­rithmic suite, which emphasizes venue ver­sus volume scheduling,” he added. “We want to trade in the right venues, but we also want to trade with the right participants. We layer in a lot of engineering in terms of price discov­ery, fair-value triggers, etc. We measure all the results, and give feedback to the brokers, and ask them to compete for our business.”

Minicus describes the next category as a ‘natural’ block of stock that Fidelity would trade with another large institution, via an intermediary. These can be some of the most efficient transactions in terms of their large size and minimal market footprint.

“The quants have done a lot of work on this,” Minicus said. “We’ve approached our broker providers. We have helped to create elec­tronic block crossing networks that we par­ticipate in. We have discussed indications of interest and the automation of indications of interest, which is a process by which brokers advertise what stocks they want to work on, or what stocks they have natural flow in.”

The third category is “good old-fashioned cash trading,” in which Fidelity traders have more than 15 years’ experience on average, Minicus noted. “That’s indispensable in terms of uncovering these blocks of stock,” he said.

The final category is the large, strategic trade that is typically one-off in nature and may involve plan sponsors or other issuers who need access to capital markets. “Fidelity is an extraordinarily attractive counterparty in those types of transactions,” Minicus said. “It’s important to have professional traders who know how to receive that inquiry and process it, and allow our shareholders and our portfolio managers to access that unique liquidity.”

“We continue to evolve and enhance our global equity trading capabilities,” Minicus concluded. “With our counterparties under continued pressure on both the regulatory and business fronts, our ability to incorporate world-class, next-generation electronic trad­ing with superior high-touch cash trading, will ensure us the flexibility we need to best serve our shareholders.”

As of year-end, Fidelity employed 137 equity-research analysts, covering more than 2,400 stocks from desks in London, Hong Kong, Tokyo, Boston, Denver, and Miami. “It’s really a sizable investment by the firm,” Hogan said. “While Wall Street and some of our competitors have been consolidating a bit in their coverage, we’ve been investing in research, globally.

Regarding Fidelity’s depth of talent, Hogan said “we have guys like Joel Tillinghast, who’s been running money at Fidelity for 24 years; Will Danoff, 23 years; Steve Wymer, 18 years, and John Carlson, 19 years…I can’t tell you how important it is to have people who have been through different investing environments and crises. Not only does that help them navi­gate, but it helps the firm navigate, because information is shared across asset classes.”

As an example of Fidelity’s commitment to a global approach, the firm established an equity-trading desk in Hong Kong in early 2013. “Having equity-trading desks in Lon­don and now Hong Kong, in addition to our U.S. desk in Boston, allows us to trade across time zones and cultivate relationships with local brokers,” Hogan observed.