WHEN A BUY-SIDE institution wants to buy or sell a large block of stock, finding the other side of the trade is the challenge. With 740 members across 42 markets globally, there’s at least a decent chance that the right match can be found on the Liquidnet network.

Liquidnet’s value proposition as a trading venue is crossing mammoth trades. When a Liquidnet member traded a U.S. stock in 2013, it was the market’s biggest or second-biggest trade 76% of the time, the company said. The 13-year old firm crossed its largest-ever trade in a U.S.-listed stock in October 2013, when two Liquidnet members exchanged 2.9 million shares worth $150 million.

Liquidnet is based in New York and its primary market is the U.S., but international expansion is an ongoing and very much front-burner initiative.

“Building out Liquidnet’s global footprint to 42 markets has played a significant role in our success. While the bulk of investable assets are still held in North America, 2013 has marked a year in which these institutions have increasingly looked to diversify their international investment strategies,” Liquidnet Founder and CEO Seth Merrin said in a January release. “With approximately 45,000 publically traded companies globally, institutional investors realize they have to look outside their borders to find the best opportunities. In 2013, this has meant diversifying into European equities and exploring new opportunities in Asia-Pacific.” 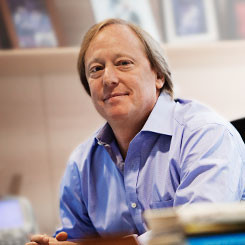 Globally, principal traded on Liquidnet’s network increased 17% in 2013, to $470 billion. Average execution size rose 15% to $1.4 million, which Liquidnet said exceeds the execution size on major exchanges by more than 100 times.

Trends in 2013 European institutional trading included increased confidence in trading equities in large block size, more investment flows from U.S. institutions, and more trading activity in large-capitalization stocks. Liquidnet said additional growth in the region was driven by the expansion of the firm’s commission management services, which are designed to reduce the conflicts that stem from managing best execution and the need to use commissions to pay research and execution bills.

In Asia-Pacific, Liquidnet said principal traded increased more than 14%, including record levels reached in Southeast Asia, Japan and Hong Kong. Liquidnet expanded into Thailand as its 42nd market in April 2013.

Merrin said Liquidnet’s adding of markets is a function of the firm tracking institutional demand.

“This ability to quickly respond to changes by directing flow to where opportunities arise is increasingly central to institutional performance. This trend will continue in 2014 and we expect to see more cross-border equity flows across our 42 markets as a result,” he said. “As a global trading network, we will continue to remain focused on removing barriers and make trading more efficient around the world, helping our members achieve even greater performance.”