CBOE HOLDINGS, the biggest U.S. options exchange operator, gained a bit of separa­tion on its rivals last year. The capture of any market share is impressive in the intensely competitive options-exchange business, so CBOE’s advance can be viewed as especially impressive given the firm has a target on its back as the market leader.

Bulwarked by a dominant position in index options, CBOE’s Chicago Board Options Exchange had market share of 26.8% in December 2013, up from 23% in the year-ear­lier period, according to OCC data. CBOE’s all-electronic C2 exchange, launched in Octo­ber 2011, increased share from 1.4% to 1.8%.

In March 2013, CBOE and S&P Dow Jones Indices signed a deal to extend by 10 years CBOE’s exclusive rights to list security options contracts based on certain indices exclusively through 2032. The announce­ment didn’t mean much for CBOE’s 2013 business, but given the implications for future growth it may have been the company’s big­gest news of the year.

“It is very significant,” CBOE Chief Executive Ed Tilly said at a Jan. 15 media lunch in New York. “It continues the CBOE-S&P relationship, which is more than just a licensing agreement. The two companies con­tinue to shape the index-options marketplace.” 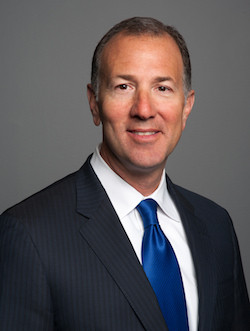 Indeed, the CBOE Vola­tility Index (VIX) is an envi­able franchise, arguably better-known than the company behind it (at least to watchers of CNBC), and a primary driver behind CBOE’s 97-98% market-share stranglehold in the index-options space. CBOE reported record volumes in total index, S&P 500 (SPX), and VIX products last year, with VIX options volume averaging 567,000 contracts per day.

Product development was first on CBOE’s recap of 2013 initiatives. “We still believe it differentiates CBOE from the major­ity of our competitors,” said Tilly, who ascended from COO to CEO in May when Bill Brodsky stepped down to the executive chairman role.

Specifically, Tilly cited SPX weekly options, which in 2013 almost doubled in volume on strong demand from retail and ‘semi-pro’ investors. Looking ahead, the exchange operator is moving forward with additional volatility products, such as short-term VIX, six-month VIX, and a volatility index tied to benchmark U.S. Treasury bonds.

Effectively developing new products goes hand-in-hand with expanding the customer base, which Tilly said is “always a goal of CBOE. We want to bring in new users and tech existing users more sophisticated strategies.”

Hedge funds and proprietary-trading firms are increasingly trading VIX futures, as are some buy-side institutions such as Black­Rock. VIX futures traders are trading VIX options, as are more sophisticated trad­ers and market participants fine-tuning risk exposures, according to CBOE.

In the fourth quarter of 2013, CBOE extended the trading hours of VIX futures to meet demand from U.S. customers for a post-settlement trading period, as well as align with the daily open in London. “Vol­ume has exceeded expectations” in the early stages of the extended-hours initiative, CBOE President and Chief Operating Officer Ed Provost said at the Jan. 15 event.

Chicago-based CBOE is also pressing its case across borders, targeting Europe, Asia, and Latin America. Provost noted the com­pany has done business in Europe for years; there are plans to “ramp up more aggres­sively” in Asia; and “there is great potential” in Latin America.