Paul Faust, former head of credit trading at BlackRock, has joined BondCliQ, a start-up that aims to be the go-to data source for corporate bonds.

“What we are directly addressing for the buy side is improving the quality of the available pre-trade data,” Faust told Markets Media. “In the current institutional market, much of the available data is unreliable, so buy-side firms don’t feel comfortable leveraging it to prove best execution. Developing higher-quality pre-trade source data is a huge opportunity for BondCliQ and could be transformational for the bond market.”

Faust was a senior trader in BlackRock’s San Francisco office for six years and was head of credit trading in 2015-16. Before his time on the buy side, he spent 16 years on Wall Street, where he worked for Credit Suisse and Merrill Lynch between 1993 and 2010.

Faust joined BondCliQ on Jan. 16 as head of strategy and product development, tasked with building a critical mass of price quotes from sell-side dealers. The platform, now in beta testing and meant to go live later this year, has eight dealers providing quotes and another eight in the pipeline, according to CEO Chris White.

The hire is the latest sign that the balance of power in corporate-bond trading — both in transactions and in employment — has shifted. Whereas big banks were once the only game in town, regulation and market forces have diminished Wall Street’s influence, and technological advances position startups to more ably develop products that seek to fill institutional liquidity gaps.

BondCliq calls itself the first central market system for the corporate bond market. “We think the bond market is missing a key piece of architecture, and as a result we are experiencing institutional liquidity issues,” White said.

Faust noted an “information asymmetry” in day-to-day markets. Large asset managers have started to develop in-house pricing systems based on the multitude of bids and offers they receive, but bank trading desks don’t have the same breadth of data.

“Dealers are running a market-data deficit,” White said. By improving the quality of, and access to, pre-trade market data, “we are helping dealers form a clearer view of pre-trade pricing information in the institutional market. This should give dealers greater confidence to provide institutional liquidity.”

For the buy side, the challenge of efficiently buying and selling corporate bonds outside of the most liquid 10% or 20% of the market is well-documented. In 2014, BlackRock famously called the market structure “broken”; just last week, institutional traders from BlackRock, Vanguard and AllianceBernstein chronicled their difficulties at the inaugural meeting of the U.S. Securities’ and Exchange Commission’s Fixed Income Market Structure Advisory Committee.

BondCliQ’s goal is to collate information that is now dispersed, enabling market participants to see best bids and offers in the block market, via a single platform. “BondCliq is structured to be buy-side friendly and easy to use — the next step is to get the right critical mass of dealers to provide quotes,” Faust said. “This is where I see myself making an impact.” 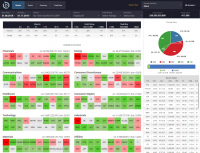 Added Faust, “As the data gets more robust with dealer quotes, coupled with the Trace engine and the data visualization, there’s a huge opportunity to be the new operating system for pre- and post-trade information.”