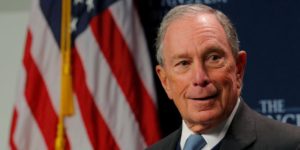 In his plan, Bloomberg noted that some of the world’s leading financial centers, such as the United Kingdom and Hong Kong, have found that taxing financial transactions can raise significant revenue, both to defray the costs of overseeing markets and to address other social needs. Such taxes can also help address inequality: 56 By one estimate, if the U.S. imposed a financial transaction tax of 0.10%, about two thirds of the burden would fall on the top 10% by income.

Therefore, Bloomberg will work with Congress to introduce a tax of 0.1% on all financial transactions, including stocks, bonds and payments on derivative contracts. The tax would be phased in gradually, starting at 0.02%, to monitor and minimize any unintended consequences.

Also, he wants to slow trading. Bloomberg said that the increasing speed of trading in markets isn’t always socially beneficial. Traders often engage in questionable activities to get a jump on the competition — such as paying for a first look at trade orders, or to place computer servers directly at exchanges. According to U.K. regulators, ultra-fast trading costs retail and other stock investors globally an estimated $5 billion a year. It can also increase the risk of hard-to-explain “flash crashes.” Research suggests there is a threshold beyond which speed doesn’t improve and may even harm market quality.

Therefore, Bloomberg said he will support measures to curb harmful types of trading — such as setting a speed limit for trading and banning payments for priority access to customer orders.

Some other key points of the Plan:

The complete plan can be viewed here: https://content.mikebloomberg.com/Mike+Bloomberg+2020+Financial+Reform+Policy.pdf